All the living organisms including plants, animals, humans and microorganisms are possess plenty of natural chemicals that enables them to thrive in nature. These chemicals includes various enzymes, hormones, proteins and volatile compounds which plays important roles in various vital processes of the organisms including metabolism, nutrition, establishment and maintenance of t..
Significance of Bacterial Volatile Organic Compounds in Agriculture
Authors: Panpatte Deepak G., Shukla Y. M., Shelat H. N. and Jhala Y. K.
Dept. of Agril. Microbiology, B. A. College of Agriculture, Anand Agricultural University

Among all the biogenic sources of voltiles soil represents the largest source of volatile compounds. In soil microorganisms including bacteria, fungi and actimnomycetes are the major emitters of the volatile compounds. Among soil microorganisms, bacteria exist in large numbers (1011 cells/g of soil). The ecological niche preferable by soil bacteria includes biofilms on roots, litter and soil particles, rhizosphere and mycorrhizal fungi surrounded by mycorrhiza helper bacteria. Till date humans have exploited microbial volatiles as aroma components of cheese, sauerkraut, yoghurt, wine, etc. The odors and aromas released from bacteria during food transformations and fermentations or from building material have been intensively investigated, only little is presently known about the general ability and efficiency of volatile emissions of bacteria. Bacterial volatile emission is largely dependent environmental conditions. Till date more than 1000 bacterial volatile compounds (BVC) are described (Lemfack et al.,2014) and established that bacteria employ their volatiles during interactions with other organisms to positively or negatively influence the interacting community. Bacterial volatiles play diverse roles as communication signals within and between different communities of organisms. In soil environment volatiles released by one bacteria may positively or negatively affects the growth and differentiation of the other microorganisms and plants. For example albaflavenone and dimethyl disulfide are having negative effect on fungal pathogens whereas geosmine, 2,3, butanediol, acetoin tridecane are having positive effect on plant growth. So these volatiles can help the bacteria which are producing such type of compounds to overcome the competitive pressure. Similarly some of the volatile compounds provides stress and antibiotic resistance phenotype to the bacteria. Recent studies demonstrated the influence of volatile compounds in bacterial biofilm formation. Such volatiles attracts the adjacent bacterial cells to join together to form biofilms. Such volatiles are very helpful in cell to cell communication of the bacteria. Some of the bacterial volatiles such as ammonia and trimethyl amine can provide immunization against pathogens by altering the physiology of gut cells in humans. Some of the volatiles of pathogens are responsible for virulence of the pathogenic strains. Indeed, several BVC were shown to influence growth, differentiation, stress resistance and/or behaviour in fungi, plants or invertebrates. 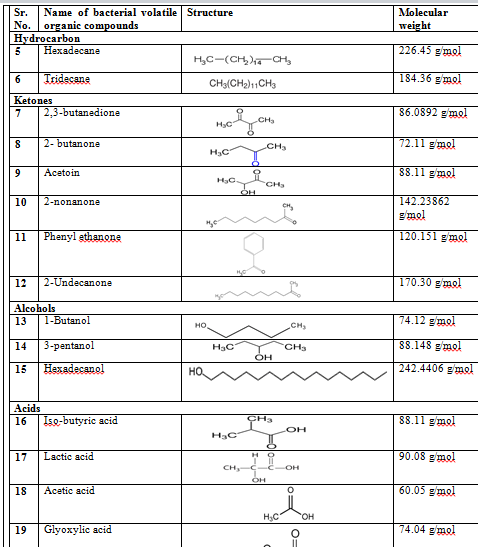 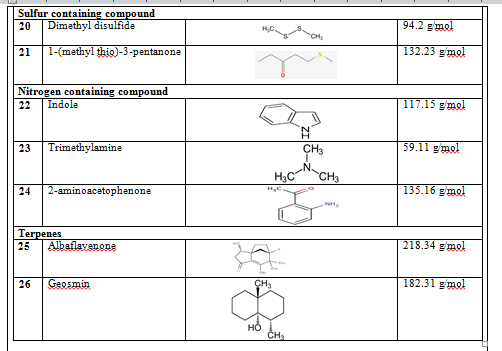 The diversity of bacterial volatiles has a comparable complexity to that known for plants and fungi, and bacterial volatiles have turned out to be a rich source for new natural compounds. Presently, the biological functions of many bacterial volatiles are not understood in detail. Bacterial volatiles can be assumed to be similar to other volatiles and probably serve as (1) infochemicals for inter- and intraorganismic communication, (2) cell-to-cell communication signals, (3) a possible carbon release valve, or (4) growth promoting or inhibiting agents. They are important for the sustainment of bacterial populations in ecological niches and for the cooperative development of a community of different organisms, and they can support the selective advantage of some community member(s) and survival during evolution. Volatiles are important chemicals because they can act over a wide range of scales. Their action profile ranges from the ability to diffuse through aqueous solutions to being able to permeate through the atmosphere. Therefore, volatiles not only play a role above ground but also function below ground.

Role of bacterial volatiles in Agriculture

Diverse and rapidly evolving pathogens and global climate changes adversely affecting food security by reduction in the world crop yield. The increased use of synthetic pesticides and fertilizers provides immediate solutions for the plant disease and crop yield problems, respectively, but in the end, they drastically affect human and environment health. Although bio-pesticides, bio-fertilizers, and bio-control agents derived from living microbes are becoming suitable replacements for the hazardous synthetic pesticides and fertilizers, their reduced efficiency, still high costs and inconsistent field performance generally downgrade them to niche products (Glare et al.,2012). Over the past decade, research on BVOCsâ€"plant interactions has led to an increasingly conceptual understanding of the intriguingly complex and dynamic nature of BVOCs, by stressing their potential role in enhancing crop protection and productivity in a sustainable way. As discussed above, exposing plants to BVOCs results in a significant modulation of plant metabolomics, physiology, and transcriptional status, which leads to the assumption that plants have the ability to perceive and respond to MVOCs. Most of the studies have, however, been conducted under lab conditions. Only recently have a few studies been performed in open field conditions to demonstrate efficient adoption of BVOCs for a sustainable crop protection and production (Song and Ryu, 2013). These studies clearly demonstrate the need for implementation of BVOCs application in open field conditions and stress their multiple roles to increase pathogen resistance, protection against herbivores and in general as bio-control agents. We now have the means to begin a new era of BVOCs applications for a sustainable crop protection and production strategies as a possible substitute for synthetic and hazardous chemical pesticides and fertilizers. Effective deployment of BVOCs still, however, remains a major challenge. Certain plant growth-promoting rhizobacteria (PGPR) elicit induced systemic resistance (ISR) and plant growth promotion in the absence of physical contact with plants via volatile organic compound (VOC) emissions.

Bacteria volatile organic compounds form a bioactive interface between plants and a myriad of microorganisms above and below ground where most of the interactions take place. BVOCs are intriguingly complex and dynamic and understanding their ecology and evolution is the key to bioprospecting suitable tools for crop protection and production for sustainable agriculture perspective. New understanding of the importance of BVOCs for crop plants both at the lab and open field conditions will make possible to adopt and implement sustainable crop protection and to develop production strategies. Many of the current insights on BVOCs have been carried out under lab conditions and on a limited number of microorganisms and molecules, but they have shown profound effects on growth, development, and defence system of plants. Numerous BVOCs contribute to these dynamic processes, leading to countless interactions between plants, antagonists and mutualistic symbionts. For a better understanding of the role of BVOCs at field level, more studies should be conducted to provide further scientific evidence that can be used to assess the cost effective, eco-friendly and sustainable use of naturally produced BVOCs for crop welfare. Among the next forthcoming research areas we foresee: expanding the knowledge on the BVOC biodiversity (by implementing the existing databases), exploring the holistic action of BVOC mixtures with respect to single compound effects, establishing high throughput analyses of plant responses to BVOCs, and producing non-volatile biodegradable precursors of bioactive BVOCs for an efficient delivery to crop fields. Field studies of the application of BVOCs remain in their infancy. More field trials are needed to prove their worth and provide a sustainable commercial production that meets farmersâ€™ needs. Consumers are well aware of the hazardous effects on the environment and human health caused by pesticides and chemical fertilizers. Alternatives to these â€" genetically modified crop plants and recently proposed genetically edited crops could provide a solution. However, most countries have lengthy, cumbersome, and expensive regulatory frameworks that slow the use of genetically modified crop plants. Therefore, this is a timely opportunity to adopt the emerging possibilities offered by BVOCs to provide new sustainable, cheaper, efficient, effective, and ecofriendly alternatives to pesticides and fertilizers. BVOCs are equivalent to biopesticides or biofertilizers. The market breadth and demand for these naturally derived compounds have increased considerably in recent years worldwide but their use remains only 4% of the global pesticide market. Researchers have realized the importance of BVOCs for crop welfare under laboratory conditions and recently extended their studies to the field with limited success. We are now beginning to understand the multifaceted interaction of BVOCs with microorganisms and crop plants and further studies should involve field-level testing of various crop species obtaining reproducible results that can satisfy farmersâ€™ and consumersâ€™ needs. However, several questions remain unsolved. In our opinion, BVOCs have a high potential impact for crop welfare and sustainable agriculture but we are just beginning to understand their role and remain far from agricultural applications. In the coming years we assume that BVOCs will outperform chemical pesticides and fertilizers.