Sohshur (Pyrus pashia) belongs to the family rosaceae and is believed to have originated in Himalayas including north east India. In India P. pashia is distributed in Himalayan region, north eastern region of India and Myanmar. Pyrus pashia are among the most popular wild edible fruits of the tribal population in India. In Meghalaya, this fruit tree is also very popular and preferred by tribal population for its sweetness and grittiness. It is found in different parts of Khasi Hills, Jaintia Hills and Garo Hills of Meghalaya and other part of the northeastern region. It is also found to be distributed across the Himalayas, from Pakistan to Vietnam and from southern province of China to the northern region of. It is also found in Iran and Afghanistan. In Bhutan, P. pashia is exclusively grown in home gardens of smallholder farmers. The most western range of P. pashia stands in Afghanistan (province Nuristan). P. pashia in north eastern Iran occurs with numerous individuals of P. boissieriana . Soh jhur is a luscious fruits with pleasant aroma, grity taste and edible peel. P. pashia is used as rootstocks for pear, leaf extract as a tonic for hair loss, treatment of digestion related ailments and posses antimicrobial activity. In addition, warm leaves extract are also consumed as beverages. Considering the demand and price of the mature fruits in the local market (Rs. 15 - 40/ kg) in Shillong, it can be regarded as potential underutilized fruit crop. Despite its potentials, the existence of this fruit tree is becoming rare in the region due to overexploitation. Soh jhur is a luscious fruits with pleasant aroma, grity taste and edible peel. This fruit contributes valuable nutrition to human as given in table below.

Nutrients composition of the fruit

Therefore, Sohshur may offer good source of income and nutrition for population inhabitant in the Himalaya hill tracts due to its richness in nutrients and good aroma for consumption as dessert fruit. A proper study and evaluation is required for enrichment of database in this crop for further utilization in crop improvement. 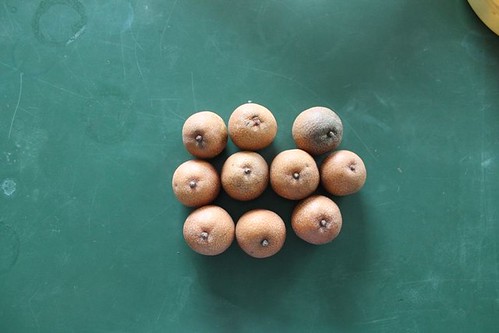