After the independence Indian agriculture sector received a tremendous growth and we reached at self sufficiency level but side by side second generation problem also rise like as the depleting of ground water, mining of soil fertility, decline partial & total factor productivity, multi nutrient deficiency, emerging new pest, disease & weeds and burning of crop residue in the open field. Last one is a recent problem which got a lot of attention after the Delhi faced heavy smog in 2016 at the onset of winter. Even though our environmentalist and court start working before public and media attention. In December, 2015 Delhi high court put a ban on open burning of crop residue in the field and send an advisory to the north Indian state (Punjab, Haryana, Delhi, Rajasthan and Uttar Pradesh), that they make a plan so in future it completely checked. Burning of crop residue in open have very serious impact on diversity of soil flora & fauna, environmental & human health, even it have power to change the monsoon pattern of the country.

After adoption of green revolution technology in country there is increase in production many fold but the demand for crop residue not increase with same pace or it is not wrong if we say that in actual it decreased because traditional use of crop residue like as (animal feeding, thatching and use as domestic fuel) minimize by alternate efficient option. Now it's is a big issue for policy maker, government and as well as farmers, what to do with surplus crop residue. Indo gangetic plain (IGP) facing more problem because both rice and wheat together produce almost 7-10 ton crop residue every year which to high than local demand of crop residue and it's not economical to dispose crop residue away from its generating site if it is not locally managed because of its bulky nature.

Main culprit in the residue burning is paddy straw because it lack the essential nutrient for animal feeding and farmers prefer to put a light in place of take burden to manage paddy straw. It is uneconomical for farmers to manage paddy straw and it also take a time to decompose in the soil they not bothers about the burning issues side effects. But now court and National Green Tribunal (NGT) intervene in this mail practices by considering human, animal, environment and ecosystem health.
Lot of machinery developed by state agriculture department as well as private organization to deal with crop residue (mainly paddy straw) like as reaper cum binder, rakes and baler, rotavator, zero till seed drill, happy seeder, combo happy seeder and turbo happy seeder in last three decade. But all the machinery has some unavoidable issues in practical field implementation, so not adopted at large scale among farmers. Now a new machinery option bring in picture that is Super straw management system (Super-SMS) in which an additional equipment attached with the combine harvester so it cut standing stubble in the small pieces and spread on the soil surface. In this crop harvesting and straw management both done in a single operation through modified combine harvesters. 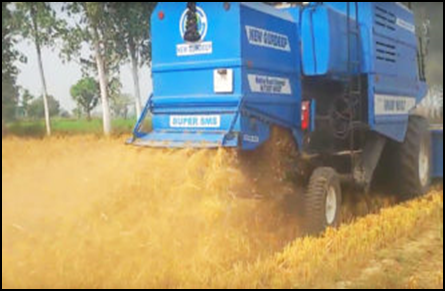 Punjab government makes it mandatory to combine owner to make change in their old machine up to 1st October 2017. Punjab government giving fifty thousand subsidies to promote adoption of Super-SMS among farming community in the state. After use of Super-SMS farmers can go for seeding of the next crop with the help of happy seeder. Combine harvester manufactures have objection that government not planned it properly and it also put a financial burden for them because they need to make changes in existing machinery and replacement of exist engine with high power ones. Again modified machine, need to approved by the Farm Machinery Training & Testing Institute situated at Hisar, Haryana without it bank unwilling to fiancÃƒÂ© the machine.

It is very early to say that Super-SMS is ultimate solution of residue burning issue in the country but its initial trial by some progressive farmers showing a positive signals some issue also reported by the farmers that Super-SMS not work effectively if paddy straw little bit moist. But hope that trivial issues get solved with time being by agriculture engineers and local manufactures.


About Author / Additional Info:
I am working as a scientist at ICAR-IIFSR, Modipuram, Meerut, Uttar Pradesh, India.