The demand for energy has enormously increased in recent years mainly due to the development of industries as well the population growth. Therefore it is imperative to look for other alternative sources of fuel mainly from biological/renewable sources. Presently, biofuels are produced from crop plants such as wheat, maize, sugarcane etc. Globally, the production of biofuels has been steadily increasing and will continue to increase in years to come due to rise in the prices of fossil fuels, depleting oil reserves and increasing green house effect largely due to the use of fossil fuels. Energy from biofuels provides greater energy security and reduced green house gas emissions. Among the various crops that are considered as promising sources for biofuel, sweet sorghum, a natural variant from grain sorghum is considered as one of the promising crop for bioethanol/biofuels production.

Sweet sorghum is a natural variant of grain sorghum grows tall, produces high biomass and substantial grain yield under managed conditions. Sweet sorghum is a C4 plant with high photosynthetic efficiency. The economic part is the sugar rich stalk and can produce high stalk yield of about 50 - 70 t/ha. The sugar content in the sweet sorghum stalks range from varieties to varieties. The green stalk yield, juice content and brix content are important traits which enhances the value of sweet sorghum for bioethanol production. The brix content (%) in sweet sorghum ranges from 15-22%. The crop is generally harvested at physiological maturity when the brix content in the green stalks are high. The grains are harvested separately and can be used for food or feed or industrial purposes. The bagasse after extraction of juice from the stalk can be used as animal feed. Therefore, development and cultivation of improved sweet sorghum genotypes apart from bioethanol production has significant role in promoting agricultural production in rural areas, sustaining livelihoods of rural farmers and promote livestock production (Almodares and Hadi, 2009). 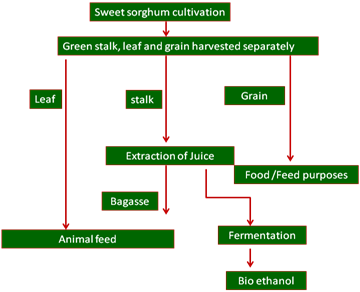 Figure: A schematic diagram for bioethanol production from sweet sorghum and other alternate uses

1. Sorghum is a multipurpose crop and can be used for food, feed, fuel and fodder. The crop is highly adaptable to wide range of climatic conditions including drought and salinity.

2. Compared to other biofuel crops unlike sugarcane sweet sorghum requires very less water due to shorter crop duration (4 months) and two crops can be grown in a year.

3. The crop can be grown on poor or marginal fertile soils which are not fit for growing cereal crops such as maize or wheat.

4. Sweet sorghum is well suited for second generation biofuels productions which are manufactured from lignocellulosic biomass.

5. Brown midrib (bmr) mutants are observed in sorghum and are reported to contain significantly lower levels of lignin content. Low lignin is beneficial since higher yield of the fermentable sugars is expected to be produced after enzymatic hydrolysis.

6. Cultivation of sweet sorghum for bioethanol production would meet the growing demand of energy of rural population as well as promote rural development by the way of creating employment opportunities for rural population

7. Production of bioethanol through environmentally friendly routes addresses the growing concerns of the green house gas emission and global warming

8. Cultivation of sweet sorghum for biofuel production in the waste lands may address the conflict of food vs fuel security

About Author / Additional Info:
I am a scientist currently working on genetic improvement of sorghum for forage and grain quality attributes using conventional and molecular tools