Presently disease control is largely based on the use of fungicides, bactericides and insecticides. Most plant protection methods currently applied use toxic chemicals noxious to the environment for pathogen and pest control. The hazardous effect of these chemicals or their degradation products on the environment and human health strongly necessitates the search for new, harmless means of disease control. Induced resistance like SAR may diminish the use of toxic chemicals for disease control, and thus could be proposed as an alternative, non-conventional, non-biocidal and ecologically-friendly approach for plant protection and hence for sustainable agriculture.

What is induced resistance?

The induced resistance can be defined as an increased expression of natural defense mechanisms of plants against different pathogens provoked by external factors of various types and manifested upon subsequent inoculation. 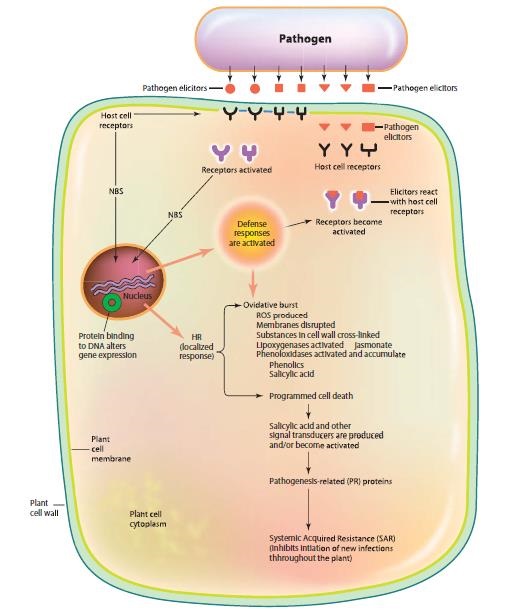 What is systemic acquired resistance?

Systemic acquired resistance (SAR) refers to a distinct signal transduction pathway that plays an important role in the ability of plants to defend themselves against pathogens. After the formation of a necrotic lesion, either as a part of the hypersensitive response (HR) or as a symptom of disease, the SAR pathway is activated. SAR activation results in the development of a broad-spectrum, systemic resistance.

SAR can be distinguished from other disease resistance responses by both the spectrum of pathogen protection and the associated changes in gene expression. Systemic means throughout in plant tissues. It is non-specific secondary response.

SAR activation results in the development of a broad-spectrum, systemic resistance. After the formation of a necrotic lesion, either as a part of the hypersensitive response (HR) or as a symptom of disease, the SAR pathway is activated. It provides a broad-range resistance against fungal, bacterial and viral pathogens and leads to pathogenesis-related (PR) gene expression. It can be induced by plant pathogens, chemicals and bio-agents and not induced after the onset of flowering & fruiting in host plant.

The viral infection of tobacco induced the accumulation of a distinct set of proteins, called pathogenesis-related proteins (PR proteins). At least nine gene families were induced in uninfected leaves of inoculated plants; these gene families are now known as SAR genes. Several of these SAR gene products have direct antimicrobial activity or are closely related to classes of antimicrobial proteins. Morphological and biochemical changes in SAR-protected plants include a significantly faster lignification response, which correspond with an increase in peroxidase activity. Other changes include increased glucose and fructose concentrations in systemic tissue, induction of lipoxygenase, phenylalanine ammonia lyase, phytoalexins and hydroxyproline-rich glycoprotein.

Signal generation and transmission in SAR:

Long distance signals can directly activate defense or can prime for the stronger and faster induction of defense. Historically, research has focused on the vascular transport of signaling metabolites, but volatiles can play a crucial role as well. SA is not the crucial long-distance signal in SAR, even though it is transported throughout the plant and activates SAR.

SAR is effective against a broad range of pathogens and parasites, including fungi, bacteria, viruses and nematodes. Salicylic acid is not the trans-located signal responsible for inducing Systemic Acquired Resistance but is required in signal transduction. Methyl salicylate, lipid signaling, peptide signaling, Green â€" leaf volatiles are the transported signals in SAR. Overexpression of an essential regulatory gene (NPR1) leads to the generation of broad-spectrum disease resistance in plants which is also known as systemic acquired resistance.

About Author / Additional Info:
I am Ph.D. scholar at Anand Agricultural University, Anand.
I am pursing Ph.D. in the Plant Molecular Biology & Biotechnology and also presently working as Junior Research Fellow.