Beside playing major role in plant metabolic intermediates, sugars can also act as signals and regulating carbon assimilation and sugar status in plants. In that, trehalose, a small side-branch of the major carbon flux in plant cells, has recently drawn a lot of attention because of its intriguing regulatory effects on plant growth, development, and stress resistance.

The disaccharide trehalose is typically synthesized in a two-step reaction: T6P is first synthesized from G6P and UDP-Glucose by TPS (Trehalose-6- phosphate synthase), and then dephosphorylated to trehalose by a T6P phosphatase (TPP).

Role of Trehalose in carbohydrate metabolism

• In Arabidopsis, T6P is synthesized by TPS1 which is localised in cytosol, promotes AGPase reaction in chloroplast through thioredoxin-mediated redox reaction.

In this way trehalose may act as a signal between cytosol and chloroplast to regulate the starch synthesis. 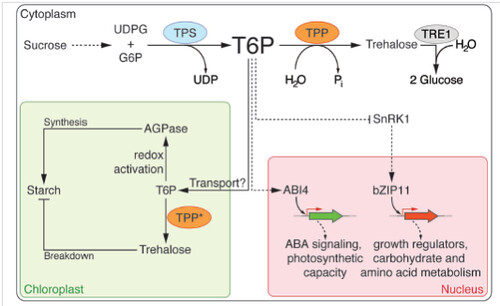 In this way trehalose may act as a signal between cytosol and chloroplast to regulate the starch synthesis.

• Apart from this, T6P has been shown to inhibit the sucrose non-fermenting 1- related protein kinase1 (SnRK1).

• When sucrose content decrease, results in decrease in T6P level. Thus SnRK1 is released from repression which leads to induction of gene involved in photosynthesis, thus more carbon is available to growing cells.

• In Arabidopsis, bZIP11 has been shown to regulate T6P level, which may acts as a powerful regulators of carbohydrate metabolism.

• In Arabidopsis, trehalose plays a role in successful embryo maturation.

• The cell wall of trehalose deficient mutants embryos are thicker than the wild type plants.

• T6P has been shown to involve in ABA signalling and sugar metabolism to regulate embryo maturation and vegetative growth.

• T6p is also involved in induction of flowering.

• Mechanism involved in induction of flowering is associated with increase in starch mobilisation, a transient increase in leaf carbohydrates and finally export of sugars to shoot apical meristem, controlling transition to flowering.

• Trehalose has been shown to be involved in inflorescence architecture and branching. This information came from the study in ramosa3 (ra3) mutant in maize.

• RA3 is a functional TPP enzyme which acts upstream of RA1 transcription factors in the RAMOSA pathway, regulating inflorescense development.

About Author / Additional Info:
Currently, I am in Ph.D student in Plant Physiology. I am working on abiotic stress management.