In mountain regions, accelerated soil erosion is a common and environmentally destructive consequence of development. Soil erosion has been extensively studied by agricultural researchers, and reducing soil erosion is widely recognized as a key to sustainable agriculture. Soil loss lowers crop productivity, changes on- and offsite hydrology, and creates off-site deposits that may be damaging. To maintain the potential for future cultivation and to protect water resources, it is important for any further development in mountain regions to involve dedicated efforts to avoid soil loss. Much is well known about soil erosion, especially about the general characteristics of soil, rainfall, and topography that favor it. Essentially, soil is vulnerable to erosion where it is exposed to moving water or wind and where conditions of topography or human use, such as steep slopes, compacted surfaces, removal of vegetation, or years of plowing, increase the force of the moving fluid or decrease the cohesion of the soil. Reducing soil erosion is important to preserve nutrient-rich soils and natural or unnatural configuration of the topography. Using plants for erosion control is an excellent biological method to safeguard the landscape and the shape of the land. There are many types of erosion control plants, but preventing erosion with native plants complements and accents the natural landscape.
Perennial temperate grasses are useful for erosion control and have the added benefit of fitting readily into the landscape. They will easily transplant and take in conditions that mimic their natural habitat. These grasses also need less maintenance as they are adapted to the region and receive most of their needs in the existing site.

Dactylis glomerata , also known as cock's-foot, orchard grass is a common species of grass in the genus Dactylis. It is a cool-season perennial C3 bunchgrass native throughout most of Europe, temperate Asia, and northern Africa.

Dactylis glomerata occurs from sea level in the north of its range, to as high as 4,000 m in altitude. It is widely used forhay and as a forage grass. 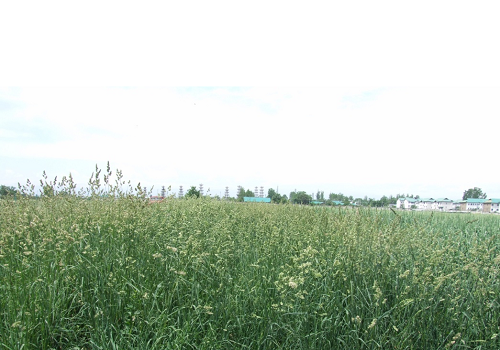 Cock's-foot grows in dense perennial tussocks to 20-140 cm tall, with grey-green leaves 20-50 cm long and up to 1.5 cm broad, and a distinctive tufted triangular flower head 10-15 cm long, which may be either green or red to purple-tinged (usually green in shade, redder in full sun), turning pale grey-brown at seed maturity. The spikelets are 5-9 mm long, typically containing two to five flowers. It has a characteristic flattened stem base which distinguishes it from many other grasses. It flowers from June to September.

Festuca arundinacea ( syn. , Schedonorus arundinaceus and Lolium arundinaceum) is a species of grass commonly known as tall fescue. It is a cool-season perennial C3 species of bunchgrass native to Europe. 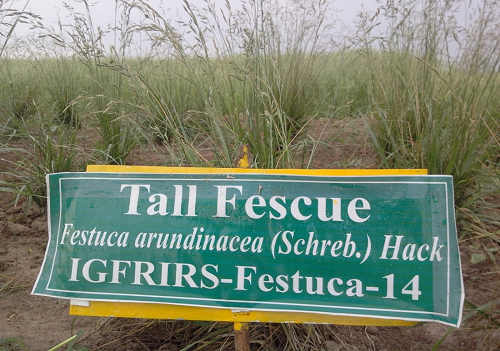 Tall fescue is a long-lived perennial bunchgrass species. Photosynthesis occurs throughout the leaves, which form bunches and are thick and wide with prominent veins running parallel the entire length of the blade. The blades have a "toothed" edge which can be felt if fingers are run down the edge of the leaf blade. The underside of the leaf may be shiny. Emerging leaves are rolled in the bud with no prominent ligule. Note that most grasses are folded not rolled, which make this a key identification feature on tall fescue. The auricles are usually blunt but occasionally may be more clawlike. The culm is round in cross-section. Typically, this species of grass has a long growing season and ranges between 2 and 4 feet (1.2 m) tall in seed head stage.

Tall fescue spreads through tillering and seed transmission not by stolons or rhizomes , which are common in many grass species.

Various species of Phalaris grow on every continent except Antarctica. They can be found in a broad range of habitats from below sea level to thousands of feet above sea level and from wet marshy areas to dry places. 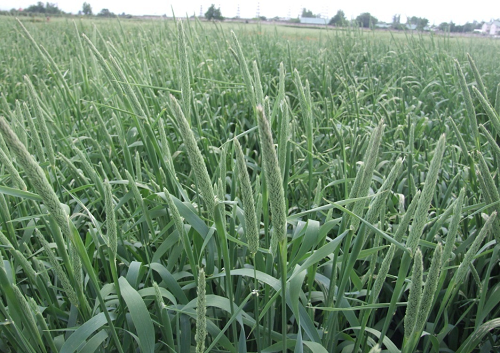 Festuca rubra is a species of grass known by the common name red fescue or creeping red fescue. It is widespread across much of the Northern Hemisphere and can tolerate many habitats and climates. It is best adapted to well-drained soils in cool, temperate climates; it prefers shadier areas and is often planted for its shade tolerance.

Festuca rubra is perennial and has sub-species forms that have rhizomes and/or forms bunchgrass tufts. It mainly exists in neutral and acidic soils. It can grow between 2 and 20 cm tall. Festuca rubra, as red fescue or creeping red fescue, is cultivated as an ornamental plant for use as a turfgrass and groundcover . It can be left completely unmowed, or occasionally trimmed for a lush meadow -like look. The ligule is very short and blunt. 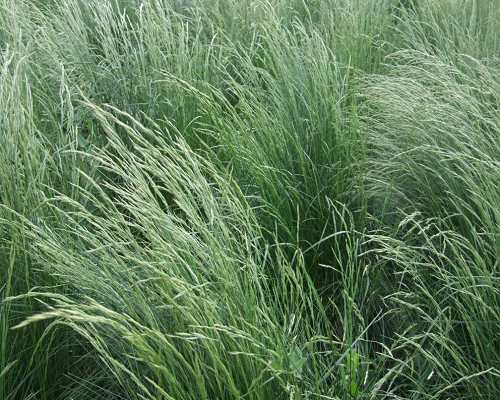