The History of Corn

Maize has been described as "having a passport without a birth certificate" (Wilkes and Goodman 1996) because; its precise parentage has been controversial with over 200 land races Indigenous to Latin America. Domesticated form of corn i.e. teosinte (grain of the Gods), a wild grass found in the patches of Mexican western Sierra Madre. With the use of modern archeological and genetic techniques, scientists concluded that teosinte was first domesticated around 4,000 to 3,000 B.C.

Early corn (teosinte) looked very different than today's corn in that the kernels were small and individually covered by their own floral parts and the cob readily broke into small fragments. The word "corn" can be traced to an Indo-European word that was translated to describe "small nugget". The various transmutations of this origin evolved into the Germanic "korn" which means any cereal grain, and the Latin "granum" (grain) which also refers to any edible grass seed. When English and German settlers arrived in the New World they referred to the crop as "corn" referring to their common term for an edible grass crop. They illustrated it from other grains by calling it "Indian corn". The name for their crop was actually "mahis" which meant "source of life". Over time, the word has been transmuted phonetically into maize.

When Columbus landed in the West Indies, the Indians gave him corn to take home to Spain. From there, corn spread quickly throughout Europe and the rest of the world. The earliest settlers in this country might have died during their first winter if the Indians hadn"t given them corn to cook and eat. The Indians also showed the settlers how to grow corn. They dug holes in the ground, dropped in some kernels and small fish, and covered them. The fish were used to fertilize the soil.

The Indians already had numerous ways for preparing corn which they shared with the settlers. Corn was made into bread, porridge, soup, fried corn cakes, and pudding. Corn was so valuable that the settlers used it instead of money. They trade it with the Indians for food and furs.

In the late 1930s, Paul Mangelsdorf and his colleague Robert Reeves proposed a hypothesis - Tripartite hypothesis (Mangelsdorf, 1974; Mangelsdorf and Reeves, 1939). This theory states that maize was domesticated from some unknown wild maize, presumably a plant with structures that resembled the modern maize ear. More speci?cally, as the name indicates, the hypothesis consisted of three parts. They pointed to their own successful cross of maize and Tripsacum as validation for their hypothesis. 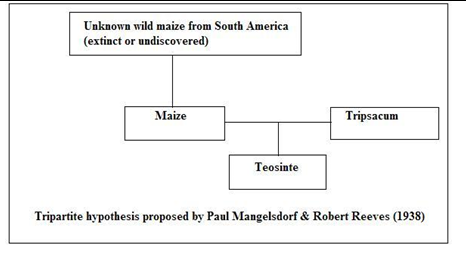 George Beadle, on the other hand explained, the morphological differences between maize and teosinte were not so large as to require an extinct ancestor. In June 1939, less than a year after the publication of the tripartite hypothesis, he responded with his own theory on the origin of maize, an idea he had convinced himself of as a Cornell graduate student under the direction of Rollins Emerson (Doebley, 2001). In his teosinte hypothesis, Beadle (1939) stated that maize is simply a domesticated form of teosinte. He believed that through arti?cial selection by ancient populations, several small mutations with large effects could have transformed teosinte into maize. 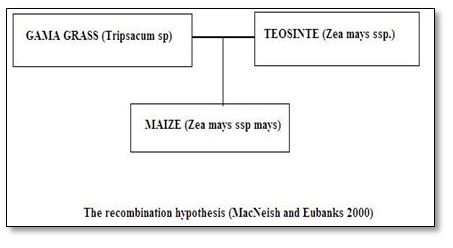 The success of these crosses was significant for four reasons: (1) these were the first viable recombinants recovered, (2) recombinant derivatives were fully fertile, (3) they were cross fertile with maize and (4) some of the flowering spikes had paired kernels.

Domesticated maize was the result of frequent interaction with humans, with early farmer's selection and planting seed. As a result, alleles controlling favored traits increased in frequency within the population. Thus with each succeeding generations these ancient agriculturists produced a plant more like modern maize and less like the wild grass of their ancestors.