In recent years, biological control of plant pathogens has received increasing attention as a promising supplement or alternative to chemical control. Trichoderma - a genus under Deuteromycotina has gained immense importance as a biological control agent (Lorito et al., 1999). Trichoderma species are free living fungi that are common in soil and root ecosystems. A recent discovery shows that they are opportunistic, avirulent plant symbionts as well as parasites on the other fungi. The researchers are interested in the genus Trichoderma because of its novel biological properties and biotechnological applications. In this context, the present paper discuss about importance of Trichoderma as a BCA and its mechanism of action towards management of plant diseases.

Biological control of plant pathogens is an attractive proposition to decrease heavy dependence of modern agriculture on costly chemical fungicides, which not only cause environmental pollution but also lead to the development of resistant strains. Different biological control agents (BCAs) can be used for the control of diseases. These include bacteria, fungi and actinomycetes. The most important BCAs belong to the genus Trichoderma.

Trichoderma- As a biological control agent:

Trichoderma is considered as a class of imperfect fungi, without known sexual stage. They are usually found in uncultivated land sometimes in forest land and to some extent in cultivated land. It is considered as one of the efficient biocontrol agent due to its high reproductive capacity, ability to survive under very unfavourable conditions, efficiency in nutrient utilization, capacity to modify the rhizosphere, strong aggregativeness against the pathogenic fungi and efficiency in promoting plant growth and defense mechanisms.

Members of the genus Trichoderma are potent mycoparasites as they attack and parasitize plant pathogens, and therefore they are commercially applied as biocontrol agents. They are known to control soil borne fungal pathogens belonging to class ascomycete, deuteromycete, and basidiomycete and also certain air borne pathogens (Monte, 2001).

Mechanisms of action:
There are five different mechanisms by which BCAs control other microorganisms;
i) direct competition with the target organism
ii) antibiosis
iii) predation or parasitism of the target organism
iv) induced resistance of the host plant and
v) inactivation of the enzymes produced by the pathogen. Most BCAs apply only one of these five mechanisms; however, some may employ more than one.

Some of the mechanisms adopted by Trichoderma against plant pathogens are described below.

Competition for space or nutrients has long been considered one of the classical mechanisms of biocontrol by Trichoderma spp. The competition for nutrients, primarily carbon, nitrogen, and iron is one of the method of the biological control of soilborne plant pathogens (Elad et al., 1999).

Trichoderma species are generally considered to be aggressive competitors and the ability of Trichoderma to compete is species dependent. Competition through rhizosphere competence is a mechanism that has gained adherents in recent years. It is an important mechanism because a biocontrol agent cannot compete for space and nutrients if it is unable to grow in the rhizosphere (Ozbay and Newman, 2004).

Induction of resistance in host plant by treatment with the biocontrol agent is another mechanism in biological control. Specific strains of fungi in the genus Trichoderma colonize and penetrate plant root tissues and initiate a series of morphological and biochemical changes in the plant, considered to be part of the plant defense response, which finally leads to induced systemic resistance (ISR) in the entire plant (Howell, 2003). The plant response was marked by an increase in peroxidase activity (often associated with the production of fungitoxic compounds), an increase in chitinase activity, and the deposition of callose-enriched wall appositions on the inner surface of cell walls.

Trichoderma strains are known to associate with plant roots and root ecosystems. They are also plant symbiont and opportunistic avirulent organisms, able to colonize plant roots by mechanisms similar to those of mycorrhizal fungi producing compounds that stimulate growth and plant defense mechanisms. This mechanism includes plant root colonization and rhizosphere modification.

It seems logical that a biocontrol agent should grow and persist, or "colonize", the surface of the plant it protects, and colonization is widely believed to be essential for biocontrol. Trichoderma strains must colonize plant roots prior to stimulation of plant growth and protection against infections. Colonization implies the ability to adhere and recognize plant roots, penetrating and withstanding toxic metabolites produced by the plants in response to invasion by a foreign organism, whether pathogen or not. Root colonization by Trichoderma strains mostly enhances root growth and development, crop productivity, resistance to abiotic stresses and the uptake of nutrients (Arora et al., 1992).

The soil environment influences spore germination, chlamydospore formation and the production of secondary metabolites, such as antibiotics and enzymes. The pH of the microbial environment is one of the major factors affecting the activity of both Trichoderma and pathogenicity factors secreted by different microorganisms (Arst and Penalva, 2003).

Biocontrol is often attributed to antibiosis. With respect to antibiosis, one or more antibiotics have been shown to play a role in disease suppression. Antibiosis may be simply a highly effective mechanism for suppressing pathogens in the rhizosphere. Antibiosis occurs during interactions involving low molecular weight diffusible compounds called antibiotics produced by Trichoderma strains that inhibit the growth of other microorganisms.

Mycoparasitism is considered an important mechanism of biological control and probably depends on the production of lytic enzymes including Beta-1, 3-gluconase, and proteases. Several chitinolytic enzymes have been reported in T. harzianum including endochitinases, exochitinases and 1, 4-Beta-N-acetyl-glucosaminidases which are induced during growth in liquid medium containing chitin as carbon source.

Mycoparasitism is a complex process including several steps. The initial interaction shows that the hypha of the mycoparasites grows directly towards its host. When the mycoparasite reaches the host, its hypha coils it or attaches to it by forming a hook-like structure. Following these interactions hypha sometimes penetrates the host mycelium, apparently, by partially degrading its cell wall (Elad et al., 1983).

6. Inactivation of the Pathogen's Enzymes

Enzymes such as chitinases and /or glucanases produced by the biocontrol agent are responsible for suppression of the plant pathogen. These enzymes function by breaking down the polysaccharides, chitin, and ÃŸ- glucans that are responsible for the rigidity of fungal cell walls, thereby destroying cell wall integrity (Howell, 2003). Trichoderma harzianum (T39) produces proteases that are capable of degrading the pathogens plant cell wall degrading enzymes, and thereby reducing the ability of the pathogen to infect the plant. 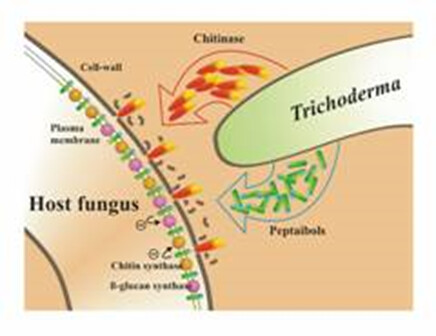 Management of fungal plant diseases are a major concern of a biologist worldwide and bio control agents as like Trichoderma has played important role as a promising alternative to chemical control. Since it is a potential bio control agent against wide range of fungal pathogens. This study shall be help us to improve the understanding of mechanism of action of Trichoderma at molecular level and we may extend the possibility of using it for future plant disease management