Bio-char makes the biomass a sustainable and value-added product for urban and rural agriculture while managing waste disposal effectively. Though, an expensive approach for small scale growers, its soil and environment benefits is well appreciated in poor and contaminated soils...
Value Added Benefits of Bio-Char in Agriculture

Agricultural biomass production in India is estimated at about 686 MT /annum. Though, 234 MT (34 %) of this biomass is available for generating energy (Hilodhari et al, 2014) but still a major portion of paddy straw, sugarcane trash and other farm wastes is disposed of either by burning it in the field itself or by incorporating in the soil after chopping. Biomass burning is not a desired option for managing the agricultural residues because of its negative impact on air pollution and release of harmful green house gases. Chopping of biomass and its subsequent incorporation in to soil is an approach that gives only short term benefits. Moreover, soil amendment with nitrogen poor biomass such as paddy straw has the potential to reduce the nitrogen availability to the plant by immobilization. A third alternative for biomass management is its burning under controlled oxygen and temperature (pyrolysis) which produces bio-char as a byproduct. Although an expensive approach for small scale growers, its soil and environment benefits are well appreciated in poor soils. 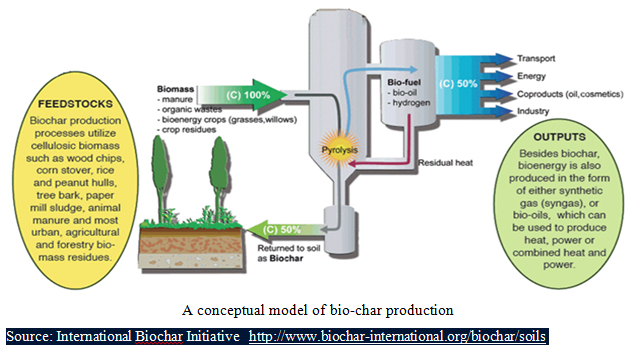 Bio-char is made up of stable carbon matrix that can hold air, chemical, water, and organics. It has the potential to reduce the emission of green house gases such as nitrous oxide and improve the uptake of methane. By fixing easily degradable plant carbon into stable carbon, carbon dioxide can be slowly removed from the atmosphere. Bio-char has been found to adsorb a variety of heavy metals, including lead (Pb), arsenic (As) and cadmium (Cd). Mixing of wheat straw bio-char pellets with cadmium contaminated soil under paddy cultivation could reduce the contaminant by 45 % and 62 % after first and second year of its application in soil respectively without affecting the crop yields. The high sorption capacity of bio-char can be exploited far removal of inorganic nutrients such as phosphate > 3000 mg kg-1 even at low native P content (Lehman, 2007) and 5 mg NH4+ and 0.2 mg PO4 g-1 bio-char, from solution.

Ground water pollution caused by dairy waste water is a major environment and health concern. Bio-char can be used for recapturing and transporting excess nitrogen (N) and phosphorus (P) nutrients present in dairy waste to low quality soil. It has also been found beneficial in reducing the leaching losses of carbon (C) and N from the soil. Wheat residue bio-char can act as a source of soluble P. and its addition to soil at 1 % has been reported to increase the water soluble P concentration by 25 times. However, much of the water-soluble P added through bio-char gets retained (33â€"100 %). Different rates of bio-char application can exert different effects on soil solution P concentration due to possible reactions with calcium (Ca) and magnesium (Mg) added with bio-char.

Though, bio-char is highly resistant to microbial decomposition, but its porous nature and vast surface area serves as a niche for bacteria and fungi. It can modify the biological functionality by altering the substrate availability and enzyme activities on or around the bio-char particles. Microbial population in the growing matrix has recorded a shift towards beneficial plant growth promoting rhizo-bacteria or fungi following bio-char amendment. Bio-char addition may increase soil microbial population size and affect microbial community structure (species present) and enzyme activities. However, a reduction in microbial activity, due to sorption of labile organics, nutrients, and enzymes on the bio-char has also been reported. Bio-char application has been recorded to increase the rate of mycorrhizal fungal colonization in roots, although it depends on the type of bio-char, soil and plant species.

Bio-char has been found effective in reducing the disease severity for several crop species. Citrus wood bio-char has the potential to reduce Botrytis cinerea (gray mould) by 181%, Leveillula aurica (powdery mildew) by 58%, and mite damage by 50-60% in capsicum and tomato plants. A significant disease control of Fusarium in asparagus and bacterial wilt in tomatoes has also been recorded. On the contrary, green waste bio-char has shown minimal disease suppression of Rhizoctonia solani (damping-off) in radishes. The mechanism of disease suppression has been attributed to the presence of calcium precipitates in the bio-chars, and to improvements in the physico-chemical and biological properties of the soil. In addition, certain organic chemicals produced during pyrolysis remain stuck to the pores and surfaces of the bio-char and may play role in enhancing the plantâ€™s internal immune system, thereby improving its resistance to pathogens.

Agricultural benefits of bio-char application are more pronounced in poor or contaminated soils compared to fertile soils. Higher water retention, better aeration, release of plant nutrients due to rise in soil pH are some of the benefits of untreated bio-char incorporation in tropical soils. The carbonate concentration of bio-char facilitates liming in soils and can raise the soil pH of neutral or acidic soil (Van Zweiten et al. 2007) by 1.2 pH units (pH 5.4 to 6.6). In hard setting soils, it reduces its tensile strength. Fresh bio-char may adsorb nutrients in the soil, causing a short and medium term negative effect on plant growth.

Therefore, in temperate soils bio-char should only be used after activation of bio-char surfaces through microbial oxidation and loading with nutrients. Bio-char can also be added to the composting biomass at 10â€"30% (w/w) and co-composting improves both the bio-char and the compost as nutrients are loaded to the compost. The resulting compost can be used as a highly efficient substitute for peat in potting soil and greenhouses, nurseries. Amending acid soil with bio-char or compost or a mixture of bio-char and compost have been found to increase total P, available P, inorganic P fractions (soluble-P, Al-P, Fe-P, redundant soluble-P, and Ca-P), and organic P of soil due to increased soil pH, and reduced exchangeable acidity, exchangeable aluminum (Al), and exchangeable iron (Fe). With increase in soil pH, the organic amendments effectively fix Al and Fe instead of P. Organic amendments alter soil chemical properties in a way that enhances the availability of P. Organic carbon-based fertilizers can also be prepared by mixing bio-char with organic waste such as wool, molasses, ash, slurry and pomace. These fertilizers prevent the leaching of nutrients and donâ€™t have any adverse effects of conventional fertilizers on the ecosystem. The nutrients are available as and when the plants need them.

The presence of organic compounds such as nitrogen heterocyclics, substituted furans, phenols and substituted phenols, benzene and substituted benzene, carboxylics and aliphatics in bio-char can affect the plant germination and growth. The type of organic compound and its concentration may vary according to production conditions and feedstock materials, both of which may affect the potential phyto-toxicity. Even the temperature of bio-char preparation can influence the plant growth. Incorporation of Miscanthus bio-char made at 400°C inhibited the growth of maize seedlings but the one prepared at 600 o C stimulated the growth of maize seedlings. Extracts from feed stock bio-chars produced through pyrolysis (at 500°C) did not have any adverse impact on either germination or seedling growth. Extracts from the bio-char applied at low doses have been recorded to stimulate plant growth despite the presence of phyto-toxic or bio-cidal chemicals. The presence of organic acids and substituted phenolics in wood or bamboo vinegar, (a by-product of charcoal/ biochar manufacture), have the inhibitory effect on plant germination at high application rates, but provide positive responses at lower application rates. The impacts of these components of bio-char may have a higher relevance to vegetable production systems.

Biochar makes the biomass a sustainable and value-added product for urban and rural agriculture while managing waste disposal effectively and improving soil health. It could be added to moist soil to reduce its dustiness and can also be pelletized to improve handling but the cost incurred in pelletizing determines the feasibility of the option.