OELCuD is an emerging problem for okra cultivation and was first reported from Karnataka (Bangalore) in southern India in the early 1980s. The disease can cause significant yield losses, ranging from 30 to 100 %, depending upon the age of the plant at the time of infection...
Whitefly as a Vector of Okra Enation Leaf curl Disease (OELCuD) in Okra
Authors: Pooja Kumari**, S.P. Singh* and K. K. Gangopadhyay*
**Scientist, *Principal Scientist,
ICAR-National Bureau of Plant Genetic Resources, New Delhi-110012

Introduction: Okra Enation Leaf Curl Virus (OELCV) disease is serious in North India. Initial symptoms of this disease include small, pin-headed enations on leaves, leaf curling, followed by warty and rough texture of the leaves (Fig 1). The undersurface of the leaves is characterized by mild, bold and prominent enations. There is twisting of main stem, lateral branches and leaf petiole. The leaves become thick and leathery. Leaf curling and enations are more prominent in middle-aged leaves. In severe cases, there are enations, leaf thickening and curling even in the young leaves. At times, the twisting and bending of the stem are so severe that the entire plant seems spreading on the soil surface. The infected plants either do not produce fruits or produce few deformed and small fruits unfit for marketing and consumption. The yield loss varies from 30% to 100% depending upon the age of the plant at the time of infection. These viruses are neither sap-transmissible nor seed-transmitted. The natural transmission is through whitefly in a semi-persistent manner. The ‘B’ biotype has the capacity to transfer the viruses at a fast rate. As regarding symptom is concerned The curling and enations are more prevalent on leaves that develop soon after infection than in later leaves and plants are severely stunted with fruit being small, deformed and unfit for marketing (Singh 1996).

Whiteflies identification and life cycle: The whitefly, Bemisia tabaci (Gennadius) (Hemiptera: Aleyrodidae) is a highly polyphagous insect and has been reported to feed on a number of cultivated and wild plants. There are so many weed species reported to act as an alternate host to whitefly, which sustained round the year population of this insect. A number of biotype of this insect has been reported to cause damage in various crop groups. Biotype B is reported to causes severe damage to okra plants by feeding on sap, secreting honeydew and transmitting virus diseases (Jose & Usha, 2003). Whiteflies are small snowy white in colours, about 2 mm in length, flutter from the undersides of leaves when the plants are disturbed. The lower surface of the leaves is infested with all life stages of whiteflies. The adult female may lay up to 150 eggs at the rate of 25 per day. The whitefly oviposited preferentially in young leaves which are generally located on the apical parts, with the last stage nymphs customarily found in the bottom leaves (Leite et al., 1998). However, whitefly eggs and adult numbers were not found to be significantly correlated with position in the okra canopy, but higher number of nymphs was observed in the medium rather than in the bottom part. A plausible explanation for the non-occurrence of oviposition referentially on the apical leaves is that these leaves have more trichomes, which can make locomotion, feeding and oviposition of insects difficult (Dent, 1995). Whiteflies normally lay their tiny oblong eggs on the undersides of leaves. The eggs hatch within 3-5 days and the young whiteflies gradually increase in size through four nymphal stages called instars. The first nymphal stage (crawler) is barely visible even with a hand lens. The crawlers move around for several hours before settling to begin feeding. Nymphal period is 9-14 days. Later nymphal stages are immobile, oval, and flattened, with greatly reduced legs and antennae, like small scale insects. The winged adult emerges from the last nymphal stage (sometimes called a pupa, although whiteflies don’t have a true complete metamorphosis). Pupal period is 2-8 days. The entire life cycle takes 15-27 days generally, depending on the environmental condition. They can complete more than 12 generations in a year.

Whiteflies develop rapidly in warm weather, and populations can build up quickly in situations where natural enemies are ineffective and when weather and host plants favor outbreaks. Large colonies often develop on the undersides of leaves.

OELCuD transmission by whitefly: The virus is neither sap transmissible nor seed. The only known method of transmission is through whitefly (Bemisia tabaci). Whitefly is one of the most important sucking pests that inflicts heavy damage to the crop not only through direct loss of plant vitality by feeding on cell sap but also by transmitting viruses. The natural transmission is through whitefly in a semi-persistent manner. The minimum number of whiteflies required to induce 100% infection is 10/plant, although a single whitefly can transmit the Okra Enation Leaf Curl Virus (OELCuV) effectively.

OELCuV and OELCuD: The majority of characterized geminiviruses belong to the genus Begomovirus. Begomoviruses are transmitted by the whitefly Bemisia tabaci and infect dicotyledonous plants (Lazarowitz 1992). begomoviruses native to the New World have genomes consisting of two components, which are referred to as DNA-A and DNA-B, each of 2.6–2.8 kb. Although a few bipartite begomoviruses have been identified in the Old World (OW), most have genomes consisting of only a single component, homologous to the DNA-A component of the bipartite viruses (Brown et al. 2012) The genomes of monopartite begomoviruses (and the DNA-A components of bipartite begomoviruses) originating from the OW encode six genes, two in the virion-sense and four in the complementary-sense. The virion-sense genes encode the coat protein (CP), which encapsidates/protects the virus genome and is involved in virus movement within and between plants. The complementary-sense genes encode the replication associated protein. A majority of the monopartite begomoviruses associate with a class of ssDNA satellites known as betasatellites (formerly known as DNA β). Betasatellites are approximately half the size of their helper begomoviruses which they require for replication, insect transmission and movement in plants ( Briddon et al. 2003; Zhou et al.2003). 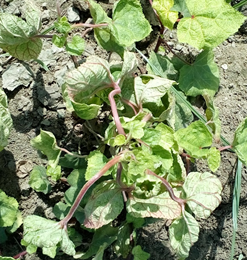