OYVMD is one of the major constraints in okra cultivation in India. The loss in marketable yield was estimated at 50-94 % depending upon the stage of crop growth at which the infection occurs (Sastry and Singh 1974, Pun and Doraiswamy 1999). If plants are infected within 20 days after germination, their growth is retarded; few leaves and fruits are formed and loss may be about ..
Whitefly as a Vector of Okra Yellow Vein Mosaic Disease (OYVMD) in Okra
Authors: Pooja Kumari**, S.P. Singh* and K. K. Gangopadhyay*
**Scientist, *Principal Scientist,
ICAR-National Bureau of Plant Genetic Resources, New Delhi-110012

Okra (Abelmoschus esculentus ) or lady’s finger is considered as an important vegetable crop of the tropical and subtropical regions of the world. It is popular in India, Nigeria, Pakistan, Cameroon, Iraq and Ghana. It is one of the most popular vegetable crops cultivated in many parts of the world and is thought to be native either of tropical Africa or Asia. It is good source of vitamin A, B, C and is also rich in protein, carbohydrates, fats, minerals, iron and iodine . The stem of the okra plant provides fiber which is used in the paper industry. This genus is important because of two cultivated species, A. esculentus andA. caillei (Patil et al., 2015). Among the genus Abelmoschus, A. esculentus is most widely cultivated for its pods throughout Asia and Africa. In the West and Central Africa, A. caillei is cultivated for leaves and pods. It is considered to be an often-cross pollinated crop since insects such as honey bees ( Apis mellifera) and bumblebees (Bombus auricomus) can aﬀect cross-pollination. Beside its economic importance, okra plants suffering due to number factors including diseases, insect pests and weeds. However, this vegetable is attacked by a number of diseases caused by fungi, bacteria, virus, mycoplasma and nematodes. Its cultivation in India is challenged by severe incidence of viral diseases, viz. Yellow Vein Mosaic Virus (YVMV) disease and Okra Enation Leaf Curl Virus (OELCuV) disease, spread by an insect vector, namely whitefly ( Bemisia tabaci ).

OYVMD transmission by whitefly:
Whiteflies, Hemiptera: Aleyrodidae, Bemisia tabaci, a complex of morphologically indistinguishable species, are vectors of many plant viruses. Several genera of these whitefly-transmitted plant viruses ( Begomovirus, Carlavirus, Crinivirus, Ipomovirus, Torradovirus) include several hundred species of emerging and economically significant pathogens of important food and fiber crops. These viruses do not replicate in their vector but nevertheless are moved readily from plant to plant by the adult whitefly by various means. For most of these viruses whitefly feeding is required for acquisition and inoculation, while for others only probing is required. Many of these viruses are unable or cannot be easily transmitted by other means. Therefore maintenance of virus cultures, biological and molecular characterization (identification of host range and symptoms), ecology, require that the viruses be transmitted to experimental hosts using the whitefly vector. These viruses are neither sap-transmissible nor seed-transmitted. The natural transmission is through whitefly in a semi-persistent manner. The female whiteflies are more efficient than the male whiteflies in transmitting the virus. Emergence of the polyphagous ‘B’ biotype of B. tabaci with its increased host range of more than 600 plant species, has resulted in Geminiviruses infecting previously unaffected crops. The ‘B’ biotype has the capacity to transfer the viruses at a fast rate. Minimum acquisition access periods (AAP) and inoculation access periods (IAP) were found to be 15 min in B-biotype and 20 min in indigenous whiteflies. 100% transmission obtained in 24 hr AAP and 16 hours IAP given to B-biotype compared to indigenous whitefly which required 24 hr AAP and IAP (Venkataravanappa 2008). Females of B-biotype and indigenous B. tabaci were more efficient in transmitting BYVMV compared to males. Seven to 15 days old Bhendi plants were found more susceptible for infection. Whiteflies population and severity of YVMD are largely influenced by weather conditions. The YVMD severity is pronounced in rainy season crops due to high temperature and humidity coupled with high level of vector population.

OYVMV and OYVMD: Bhendi yellow vein mosaic virus (BYVMV) belongs to the genus begomovirus in the family Geminiviridae. The genome of the virus is comprised of two similar sized DNA components (DNA A and DNA B). The DNA A component encodes a replication-associated protein (Rep) that is essential for viral DNA replication, a replication enhancer protein (REn), the coat protein (CP) and a transcription activator protein (TrAP) that controls late gene expression. The DNA B component encodes a nuclear shuttle protein (NSP) and a movement protein (MP), both of which are essential for systemic infection of plants. Majority of the monopartite begomoviruses are associated with additional ssDNA molecules known as betasatellites and/or alpasatellites (DNA1). Betasatellites associated with the monopartite viruses are approximately half the size of their helper begomoviruses and required to induce typical disease symptoms in their original hosts (Briddon et al. 2003, Venkataravanappa et al. 2011). These satellites depend on their helper virus for replication, movement, encapsidation and vector transmission. Alphasatellites are self-replicating (Autonomous) circular ssDNA molecules, depend on the helper virus for movement, encapsidation and vector transmission and play no role in symptom induction. The YVMD was ﬁrst reported in 1924 from India; is caused by YVMV and subsequently named as “yellow vein mosaic of okra” (Uppal et al., 1940). It is characterized by diﬀerent degrees of chlorosis and yellowing of veins and veinlets (Fig.1), smaller leaves, fewer and smaller fruits, and stunting (Venkataravanappa et al., 2012). Infection of 100% plants in a ﬁeld is quite usual with yield loss ranging between 50 and 94% (Fajinmi and Fajinmi, 2010). 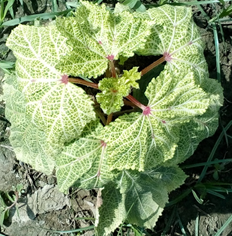 Conclusion: Despite the importance of okra, as one of the important vegetable crop, very little attention has been paid to its genetic improvement using advanced biotechnological tools. The exploitation of marker assisted breeding in okra is often limited due to the availability of a few molecular markers, the absence of molecular genetic-map(s), and other molecular tools.