Wild Caraway- A useful plant of Jammu and Kashmir, India

Carum carvi L. commonly called as caraway belongs to the family Apiaceae grows wild in Leh, Nubra, Suru, Zanaskar valleys and Drass area of Ladakh province besides in Gurez area and at some other places of Kashmir province of Jammu and Kashmir.The leaves, roots and fruits of this plant are useful.Its fruits which are commonly but erroneously called as seeds are endowed with med..
Wild caraway (Carum carvi L.) - A useful plant of Jammu and Kashmir, India
Authors: Sheikh M. Sultan
ICAR-NBPGR Regional Station Srinagar (Jammu and Kashmir) - 190007
e-mail: sheikhmsultan@gmail.com

Caraway (Carum carvi L.) belonging to the family Apiaceae (Umbelliferae) and also known as meridian fennel or Persian cumin is an aromatic biennial or sometimes perennial forb distributed throughout the northern and central parts of Europe and Asia.It also grows wild in many parts of Canada and the United States believed to have escaped cultivation as a spice crop, but is nowhere grown there as a field or garden crop now.Its cultivation is restricted to relatively small areas in England, Netherlands, Germany, Finland, Russia, Norway and in African countries of Morocco and Egypt, where it constitutes one of the chief agricultural industries within its narrow confines.Currently, Finland is the largest producer of Caraway in the world.In India, Carum carvi L. [Syn. Carum carvi var. gracile (Lindl.) H. Wolff.] grows wild in the high altitude regions of Jammu and Kashmir, Himachal Pradesh and Uttaranchal in mountain meadows, hayfields, irrigation ditches, roadsides, along water courses and disturbed areas.The plant prefers full sun and well drained soils.It is cultivated in the states of Bihar, Orissa, Punjab, West Bengal, Andhra Pradesh and in the hills of Kumaon, Garhwal (Uttarakhand) and is popularly known as vilayati jeera.

Mature plants of Carum carvi may be 1-3 feet tall with one or more slender, erect or procumbent, branching and normally hollow shoots with alternate, finely divided feathery leaves resembling those of carrots in shape but tend to droop more.The shoots emerging from a single thick and tapering taproot bear umbels of small white or pinkish flowers which blossom in June/July.The flowers are hermaphrodite (have both male and female organs) and are pollinated by bees.The plant (2n = 20) is self-fertile.Each flower produces two fruits popularly and incorrectly called as seeds, ripening in the months of July-September.These fruits or achenes are narrow, oblong, slightly curved, around 2-3 mm long, brown in color and marked with five distinct, pale ridges.They possess an agreeable taste and emanate a pleasant, aromatic odor when bruised.Wild caraway is a prolific fruit producer, under ideal conditions each plant can produce thousands of fruits and can quickly displace the vegetation in meadows.It is generally avoided by the livestock.The mature fruits fall to the ground and under favorable conditions germinate and in the first year produce a low growing rosette of leaves, then the flowering stalk bolts the second year of growth, it can sometimes bolt a third year.Plants are very sensitive to root disturbance and should not be transplanted.

In the state of Jammu and Kashmir, Carum carvi can be seen growing wild at shady places, in meadows and grassy wastelands, along water courses in Leh, Nubra, Suru, Zanaskar valleys and Drass area of Ladakh province; in Gurez area and at some other places like Sangerwani Pulwama of Kashmir province.Large populations of this plant can be seen growing at some places in Gurez.In Ladakh areas it is locally known by different names asZeera, Kumblick,Umbu, Kosnyot, Go-nyod or Go-snyod while in Gurez it is called by some as Kral-e-Zeur.During one of our recent exploration and germplasm collections programmes we have collected eight germplasm accessions of wild caraway from some of these places and these have been conserved in National Gene Bank at ICAR-NBPGR New Delhi.We have observed variability in its plant height and seed size. 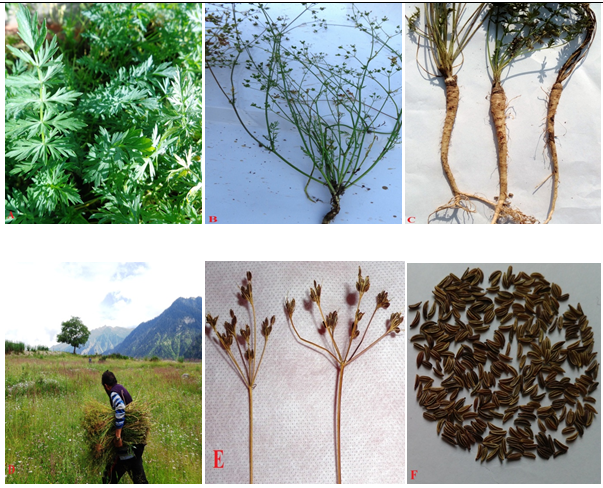 In European countries, the tender leaves of the plant are used as a salad and to give aromatic flavor to the soups while older leaves can be cooked as spinach.The roots of the plant are also edible.The plant is reported to be anthelmintic, carminative, stimulant, stomachic and tonic.Roots are antispasmodic, carminative and promote onset of menstruation (Phani Kumar et al., 2009).Caraway fruits may contain 3 - 7% essential oil.The aroma of the oil is mostly dominated by carvone (50 - 85%) and limonene (20 - 30%); the other components carveol, dihydro carveol, α pinene and β pinene, sabinene and perillyl alcohol are of much minor importance.These have a long history of use as a household remedy in the treatment of digestive complaints; their antispasmodic action soothes the digestive tract and carminative action relieves bloating caused by wind besides improving the appetite.In Ladakh, few fruits are taken directly with fresh water before sleeping as febrifuge, carminative and to promote digestion (Ballabh and Chaurasia, 2009).These are also used in the treatment of bronchitis and cough especially useful for children and also are said to increase the production of breast milk in nursing mothers.The fruits are often chewed after a meal as a freshener and also to relieve heartburn.Irrespective of these medicinal properties, the fruits of Carum carvi are used more as a flavoring agent in cookery, confectionery and liqueurs.Caraway is believed to contain myristicine.Excessive intake can lead to kidney and liver damage.

During our survey programmes, although we have observed quite large populations of wild caraway at many places in Gurez and in Sangerwani areas in Kashmir, we argue that its habitat destruction and over harvesting may eventually lead to drastic decline in its populations not only in Kashmir but in Ladakh as well.At many places in Gurez whole plants with immature fruits are being uprooted for getting fruits.The conservation of such useful plants always remains our mission.