In vitro meat refers to animal muscle tissue that scientists grow in a controlled environment in the laboratories. It is also referred to as cultured meat or test tube meat...
Current meat production methods have much health, environmental and other problems associated with them like high risk of infectious animal diseases, nutrition-related diseases, resource use and environmental pollution through green house gas emissions, decrease in the fresh water supply, erosion and subsequent habitat and biodiversity loss. The growing demand for meat and the shrinking resources available to produce it by current methods also demand a new sustainable production system. 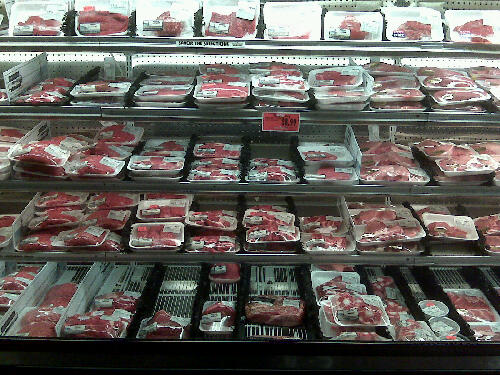 In vitro meat refers to animal muscle tissue that scientists grow in a controlled environment in the laboratories. It is also referred to as cultured meat or test tube meat. The idea of cultured meat for human consumption in a lab ex vivo is not a new concept but was predicted by Winston Churchill in the 1920s "Fifty years hence, we shall escape the absurdity of growing a whole chicken in order to eat the breast or wing, by growing these parts separately under a suitable medium." In the year 1912, Alexis Carrel managed to keep a piece of chick heart muscle alive and beating in a Petri dish demonstrating that it was possible to keep muscle tissue alive outside the body, provided that it was nourished with suitable nutrients. It was Willem van Eelen of Netherlands who independently had the idea of using tissue culture for the generation of meat products in the early 1950s. This biotechnology was put into practice by Oron Catts and Ionat Zurr in 2002 using frog muscle biopsies in Harvard Medical School.

Although the development and sale of cultured meat is still years away, there are already divergent views concerning its moral efficacy even within the animal rights movements. In vitro meat can be produced by culturing embryonic stem cells from farm animal species and are ideal for culturing since these cells have an almost infinite self renewal capacity. But these cells must be specifically stimulated to differentiate into myoblasts and may inaccurately recapitulate myogenesis.

Scientists have associated the developments of in vitro meat to a number of advantages; the first important advantage of producing in vitro meat is better control over meat composition and quality by manipulating the flavor, fatty acid composition, fat content and ratio of saturated to poly-unsaturated fatty acids through composition of the culture medium or co-culturing with other cell types. Additionally, health aspects of the meat can be enhanced by adding factors like certain types of vitamins to the culture medium which might have an advantageous effect on the health. For example, researchers have suggested that omega-3 fatty acids could be added to in vitro meat as a health bonus just the same way the omega-3 fatty acid content of conventional meat can also be increased by altering what the animals are fed.

Secondly due to strict quality control rules, such as Good Manufacturing Practice, that are impossible to be introduced in modern animal farms, slaughterhouses, or meat packing plants, the chance of meat contamination and incidence of food borne disease could be significantly reduced. In addition, the risks of exposure to pesticides, arsenic, dioxins, and hormones associated with conventional meat could also be significantly reduced.

Third advantage may be the production of exotic cultured meats. In theory, cells from captive rare or endangered animals (or even cells from samples of extinct animals) could be used to produce exotic meats in cultures and thus a sustainable alternative to global trade of meats from rare and endangered animals will help in increasing wild populations of many species in many countries. Cultured meat also reduces animal use in the meat production system as theoretically a single farm animal may be used to produce the worldâ€™s meat supply.

Another advantage is the reduction in the amount of nutrients and energy needed for their growth and maintenance as the biological structures in addition to muscle tissue are not required to produce meat in an in vitro system. Furthermore, in vitro system significantly lowers time to grow the meat and takes several weeks instead of months for chickens and pigs and years for beef cattle before the meat can be harvested and thus, the amount of feed and labor required per kilogram of in vitro cultured meat is much lower. Another advantage of cultured meat is that the bioreactors for in vitro meat production, unlike farm animals, do not need extra space and can be stacked up in a fabric hall. Thus, nutritional costs for in vitro cultured meat will be significantly lower and the decrease in costs of resources, labor, and land may be compensated by the extra costs of a stricter hygiene regime, stricter control and computer management. Need for other protein sources also demands production of cultured meat and because it is, unlike the other products, animal-derived and with respect to composition most like meat, it may be the preferred alternative.

Further cultured meat will be safer than conventional meat and due to the non-sustainability of traditional meat production there is a huge market for this. The comparatively minimal land requirement of an in vitro meat production system allows meat production and processing to take place domestically in countries which would normally rely on imported meats. By bringing the stages of the meat production process closer together spatially and temporally, meat supply can be better

With the profound advantages associated with this technique, it faces challenges that are critical to its success. There is a great challenge in producing a competitive in vitro grown meat product by ensuring that all necessary nutrients are present, dietary minerals and vitamins not synthesized by myocytes will often require binding proteins in medium and effective transport mechanisms for entry into the cells and knowledge of the complex metabolism of each crucial vitamin and mineral is necessary to develop a nutritionally valuable meat product.


Besides these benefits, Independent inquiries may be set up by certain governments to create a degree of standards for in vitro meat. Laws and regulations on the proper creation of in vitro meat products would have to be modernized to adapt to this newer food product. Some societies may decide to block the creation of in vitro meat for the "good of the people" - making its legality in certain countries a questionable matter.