Description of Various Assay Procedures for Determination of Antioxidant Activity

This article provides methods available for the measurement of antioxidant capacity and presented the general chemistry underlying the assays. This overview provides a basis and rationale for developing standardized antioxidant capacity methods for the food, nutraceutical, and dietary supplement industries...
Description of Various Assay Procedures for Determination of Antioxidant Activity
Author: Priyanka Chandra

Antioxidants can deactivate radicals by two major mechanisms, HAT and SET. The end result is the same, regardless of mechanism, but kinetics and potential for side reactions differ. Proton-coupled electron transfer and HAT reactions may occur in parallel, and the mechanism dominating in a given system will be determined by antioxidant structure and properties, solubility and partition coefficient, and system solvent. Bond dissociation energy (BDE) and ionization potential (IP) are two major factors that determine the mechanism and the efficacy of antioxidants.

Hence, many scientists feel that HAT methods are most relevant to reactions where antioxidants typically act. Relative reactivity in HAT methods is determined by the BDE of the H-donating group in the potential antioxidant. Antioxidant reactivity or capacity measurements are based on competition kinetics. HAT reactions are solvent and pH independent and are usually quite rapid, typically completed in seconds to minutes. The presence of reducing agents, including metals, is a complication in HAT assays and can lead to erroneously high apparent reactivity.

SET-based methods: SET-based methods detect the ability of a potential antioxidant to transfer one electron to reduce any compound, including metals, carbonyls, and radicals. SET and HAT mechanisms almost always occur together in all samples, with the balance determined by antioxidant structure and pH.

Relative reactivity in SET methods is based primarily on deprotonation and IP of the reactive functional group, so SET reactions are pH dependent. In general, IP values decrease with increasing pH, reflecting increased electrondonating capacity with deprotonation.

Several methods are used to measure the antioxidant activity of a biological material. The most commonly used ones are those involving chromogen compounds of radical nature that stimulate the reductive oxygen species. These methods are popular due to their ease, speed and sensitivity. The presence of antioxidants leads to the disappearance of these radical chromogens; the most widely used one is the DPPH method. Some other commonly used assays for different free radicals are mentioned below:

This method was given by Brand-Williams et al., and later modified by Sanchez-Moreno et al. It is one of the most extensively used antioxidant assay. The DPPH radical is one of the few stable organic nitrogen radicals, which bears a deep purple color. 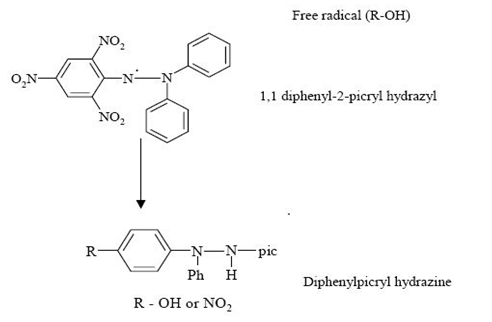 This assay is based on the measurement of the reducing ability of antioxidants toward 1,1-diphenyl-2-picrylhydrazyl radical (DPPH) by scavenging the DPPH radical, which produces a decrease in absorbance at 515 nm. When a solution of DPPH is mixed with a substance that can donate a hydrogen atom, the reduced form of the radical is generated accompanied by loss of colour. This delocalization is also responsible for the decrease in deep purple colour, characterized by an absorption band in ethanol solution at about 517 nm.

Ferric ion reducing antioxidant power (FRAP) assay is a technique to determine the total antioxidant power interpreted as the reducing capability. The FRAP assay was first given by Benzie and Strain. In this assay reductants (â€˜â€˜antioxidantsâ€™â€™) in the sample reduce Fe (III)/tripyridyltriazine complex, present in stoichiometric excess, to the blue ferrous form, with an increase in absorbance at 593 nm.

Nitric oxide ion (NO) was generated from sodium nitroprusside (SNP) and was measured by the Griess reagent. SNP in aqueous solution at physiological pH spontaneously generates NO, which interacts with oxygen to produce nitrite ions that can be estimated by the use of Griess Reagent. Scavengers of NO compete with oxygen leading to reduced production of NO. This assay determines nitric oxide based on the enzymatic conversion of nitrate to nitrite by nitrate reductase. The reaction is followed by a colorimetric detection of nitrite as an azo dye product of the Griess reaction. The Griess reaction is based on the two-step diazotization reaction in which acidified NO-2 produces a nitrosating agent which reacts with sulfanilic acid to produce the diazonium ion. This ion is then coupled to N-(1-naphthyl) ethylenediamine to form the chromophoric azo-derivative which absorbs light at 540 nm. 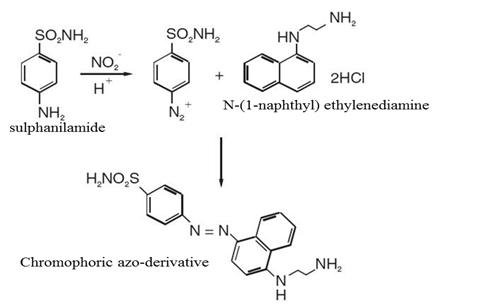 The primary reaction for nitric oxide (NO) scavenging activity

Iron, in a biological system, can stimulate lipid peroxidation by Haber–Weiss and Fenton-type reactions, resulting in the generation of hydroxyl radicals (OH-). As well as the metal ion possessing catalytic ability, it has been correlated with incidence of arthritis and cancer. Ferrous ions are also commonly found in food systems and considered to be the most effective prooxidants. Ferrozine can quantitatively form complexes with the Fe 2+ ion. In the presence of chelating agents, the complex formation is disrupted, resulting in a decrease in the red color of the complex. Measurement of color reduction therefore allows the estimation of the metal-chelating activity for the coexisting chelator.

In this assay, all the samples and the positive control interfered with the formation of ferrous and ferrozine complex, thus suggested that it had a chelating activity and captured ferrous ion before ferrozine.

This article provides methods available for the measurement of antioxidant capacity and presented the general chemistry underlying the assays. This overview provides a basis and rationale for developing standardized antioxidant capacity methods for the food, nutraceutical, and dietary supplement industries.


About Author / Additional Info:
I am scientist at Crop Protection Division, ICAR-Indian Institute of Wheat and Barley Research, Karnal, Haryana