Development of MAGIC Lines and their Implications in Crop Improvement

The past decade has seen the rise of multiparental populations as a study design offering great advantages for genetic studies in plants. The genetic diversity of multiple parents, recombined over several generations, generates a genetic resource population with large phenotypic diversity suitable for high-resolution trait mapping. Multi-parent Advanced Generation Inter-Cross (MAGIC) populations have already been created in model animals and plants, and are emerging in many crop species. Such populations mix well-characterized founder genomes in controlled pedigrees, and facilitate the investigation of both the genome itself and its relationship with traits and the environment. Traditional experimental populations combine the genomes of two parents with contrasting phenotypes to identify regions of the genome affecting the trait.

However, each of these populations captures only a small snapshot of the factors affecting the trait due to the narrow genetic base - it is only possible to detect those genomic regions which differ between the two founders. The alternative of association mapping takes a panoramic view of the whole population by sampling distantly related individuals. It hence captures far greater diversity, but requires very large samples to have sufficient power to detect genomic regions of interest, and hence may have difficulty detecting rare alleles of importance. MAGIC populations have already been created in Arabidopsis thaliana, wheat, rice, tomato and are underway in chickpea and a variety of other crops.

MAGIC population can be used for extraction of good combination and directly release as a variety. A QTL may not be effective in a single background (one of the eight parents), but may be effective in the MAGIC populations (a mixed background of the 8 parents). MAGIC populations have proven their worth for standard genetic analysis-linkage map construction, linkage analysis, and association analysis-but the real test of their longevity will be whether these results can be extended beyond preliminary identification of interesting genomic regions. 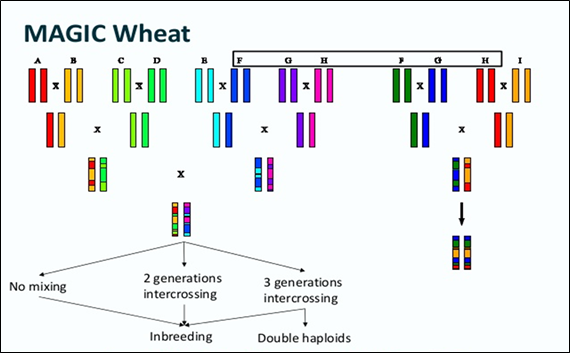