The demand for high quality and safe food which must be free of chemical as well as physical contaminants/pathogens is increased worldwide. This has increased the attention towards the application of non-residue organic technologies for the protection of stored grain. Under dry conditions, grains (paddy, maize, etc.) can be stored for extended periods provided that there is no insect infestation or microbial activity. However under humid storage conditions grains may deteriorate rapidly resulting in qualitative and quantitative losses, and this deterioration is accelerated at higher temperatures. Among the new gaseous application technologies that have successfully replaced fumigants are the manipulation of modified atmospheres (MAs) through the use of bio-generated atmosphere for controlling insect as well as for quality preservation of seeds, pulses, cereals and high moisture corn. The advantage of naturally modified atmospheric gas composition generated due to respiratory activities of the biological agents of bulk grain modified the atmospheric gas composition naturally which can prevent insect development and suppress microflora activity.

A type of modified atmosphere that can be applied for the protection of grain is hermetic storage (HS) also termed as sealed storage or sacrificial sealed storage or air tight storage. HS involves the bio-generation of an oxygen deficient and carbon dioxide-enriched atmosphere in a sealed storage ecosystem. The synergistic effect of concomitant oxygen depletion and CO2 accumulation makes aerobic respiration no longer possible. This environment could control insect infestations but preserve the quality of grains. Hermetic storage of grain, practiced already in antiquity is used today in the industrialized world to keep insect/ pests away from destroying grain stores

Hermetic storage improves grain quality and seed viability because it maintains the initial grain moisture content and reduces pest damage (without insecticides). Sealed storage also controls insect infestation as insects use the available oxygen for respiration and exhales CO2 (e.g. oxygen levels can be reduced from 21% to less than 5% within 10-21 days). At low oxygen level, insect activity is minimal and reproduction ceases. Rodents and birds do not appear to be attracted to the grain in these types of storage (possibly because they are unable to smell the grain). The key to successful HS is air tightness and control of condensation. Insect control success due to the hermetic storage treatments is comparable to conventional fumigants (over 99.9% kill) and losses due to insect activity are minimal (0.15% loss in weight for a storage period of 15 months).

Under tropical and sub-tropical climatic conditions, HS in flexible plastic storage systems continues to offer an excellent protection, provided there is a certain degree of tolerance to the presence of live insects at critical places in storage structure, particularly at the grain surface. Under long-term HS system, when grains unloaded particularly for immediate consumption, the risk of spreading insect infestation is very less.

Hermetic storage works by sealing the stored grain from the outside atmosphere. It stops the uptake of moisture and oxygen from the surrounding air and protects the grain from pests. Respiration by insects and the grain itself can reduce the inter-granular oxygen levels from 21% to less than 5%. It is reported that insect activity cease when oxygen levels reach 8-9% and complete mortality is achieved at less than 2% O2 level.

How does hermetic storage work?

The air tight packing of grains controls the change in moisture of grain with surrounding. Respiration by the grain and insects inside the storage container change the inter-granular atmosphere by consuming oxygen and producing carbon dioxide. Hermetic storage can be classified under three distinct forms: a) Organic-hermetic storage (OHS)- It relies on the metabolic activity of organisms (insects/moulds) present in the grain to generate a low level oxygen modified atmosphere; b) Vacuum hermetic fumigation (VHF) â€" It creates a very low pressure atmosphere to allow accelerated disinfestation of non-crushable commodities; and c) Gas-hermetic fumigation (GHF) by means of an external gas (usually CO2) for generation of controlled atmosphere to allow accelerated disinfestations in the case of crushable commodities such as dried fruits.

Depending on the number of insects, and type and size of the system, oxygen levels will be reduced from 21% to less than 10% within a short period of time. At oxygen levels below 10%, insects are curtailed and the viability of seed ensured. Seed viability can be increased from 6-12 months and head rice milling yield can be increased by 10%. The system works because the insects and grain respire which reduces the oxygen levels in the grain to 5-10% at which time insect activity stops. The damage due to bird and rodent also reduces.

The system can use special plastic containers (such as the volcanic cube and grain cocoons) or small containers made of plastic or steel or even clay water pots polished with wax. The size of the system can range from 25 litres to 300 metric tons. Plastics have found a wide applicability in HS due to their impermeability to moisture, oxygen and carbon dioxide. Though normal plastics are not completely impermeable, multilayer plastic materials are used for the HS that are claimed to be completely impermeable. Following are the plastic hermetic storage structures that have found their function in different situations and needs:
• Super grain bags
• Cocoons and mega cocoons
• Bunkers
• Pits Tunnel
• Silo Bag
(Note: Images shown below are only for representative purpose). 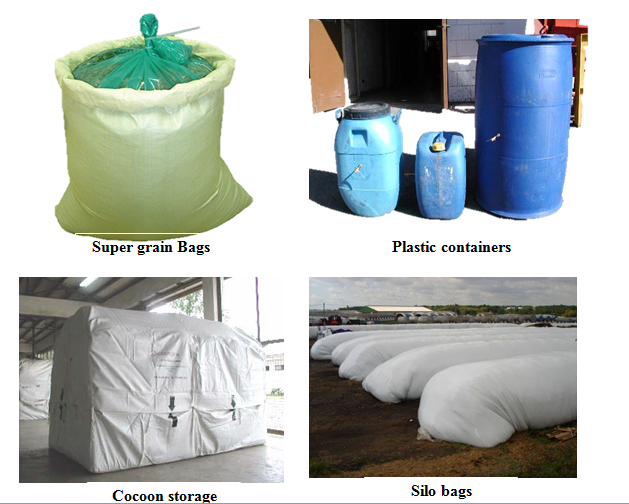 The cost of a HS system depends on the size of the commercial storage or the cost of locally recycled plastic containers or water vessels. The cost of large commercial systems usually varies from Rs. 3500-6000 per ton capacity. With an expected life of at least 10-12 years this equates to a cost of approximately Rs. 350-600 per ton/year. The cost of locally constructed systems depends on the purchase price of recycled containers or clay pots. HS systems are very effective for longer-term storage of seed and grain in tropical regions with some additional advantages like its flexibility, transportability and simplicity of operation and maintenance


About Author / Additional Info:
I am working as a scientist at ICAR-CIPHET, Abohar (ISO 9001:2015 institute since last 2 years. Our team work mainly focus on the post harvest handling of crops, value addition and preservation.
I am also pursuing my Ph.D Degree (Agril Process and Structure Engineering) from Indiaâ€™s premier agricultural research institute ICAR-IARI, New Delhi (India), in the field of Agricultural research