Mass spectrometry, is an analytical instrument for detection, identification and quantification of volatile and semi-volatile components and residues; depending on their mass/ charge (m/z) ratio. Generally, a typical Mass Spectrometer consists of three parts: an ion source, a mass analyzer and a detector.

Finally, the mass spectrum is generated after all the data have been collected. Everything is maintained under high vacuum. 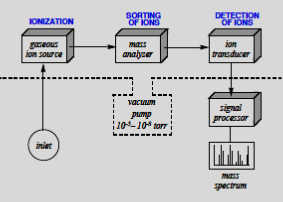 The main problem associated with traditional mass spectrometry is that, during analysis of biomolecule the electron use to come contact with the molecule (hard ionization technique) , thus the structure integrity of that molecule use to change and thus create noise error in result. Recently to overcome this problem, soft ionization technique has been adopted where matrix use to cover the biomolecule, so that ions not able to get contact directly with biomolecules.

What is MALDI-TOF-MS or MALDI-MS?

Principle of MALDI -The sample for analysis is prepared by mixing or coating with solution of an energy-absorbent, organic compound called matrix. When the matrix crystallizes on drying, the sample entrapped within the matrix. The sample within the matrix is ionized in an automated mode with a laser beam. Desorption and ionization with the laser beam generates singly protonated ions from analytes in the sample. The protonated ions are then accelerated at a fixed potential, where these separate from each other on the basis of their mass-to- charge ratio (m/z).

Principle of TOF mass analyser: This mass analyser measures the m/z value of the analyte by pulsing molecular ions from ionization source into a flight/drift tube. m/z values are calculated by time it takes for ions to travel a set distance & strike a detector (i.e. their time of flight).

Function of an Ideal MALDI Matrix-