Meadow Orchard System is a new concept of guava planting which has been developed for the first time in India at Central Institute for Subtropical Horticulture, Lucknow. The planting is done at 2.0 m (row to row) x 1.0 m (plant to plant), which gives a density of 5000 plants per ha. The trees are pruned and trained to allow maximum production of quality fruits during the first year. A single trunk tree with no interfering branches up to 30 - 40 cm from the ground level is desirable to make dwarf tree architecture. After a period of 1-2 months of planting, all the trees are topped at a uniform height of 30-40 cm from the ground level for initiation of new growth below the cut ends. This is done to make a single trunk straight up to 40 cm height. After 15-20 days of topping, new shoots emerge. In general, 3-4 shoots are retained from below the cut point after topping. As shoots mature generally after a period of 3-4 months, they are reduced by 50 per cent of their total length so that new shoots emerge below the cut point. This is done to attain the desired tree canopy architecture and strong framework. The emerged shoots are allowed to grow for 3 - 4 months before they are again pruned by 50 per cent. After pruning, new shoots emerge on which flowering takes place.

It is emphasized that shoot pruning is done thrice a year. This leads to desired canopy development. Though fruiting starts, in the same year, one can not expect fruits on each and every shoot. Pruning is continued so that plants remain dwarf. After a year, pruning operation is done especially in May-June, September-October and January-February.

Harvesting of fruits is generally done in January-February from the May-June pruned shoots. After harvest, the pruning is done above fruiting points. New shoots emerge after pruning of shoots during January-February. On these shoots, flowering takes place and fruiting is obtained during July-September. Second time pruning is done in May-June. After pruning, once again shoots emerge and flowering takes place, which yields fruits during December-February. These shoots are further pruned for the third time in September - October. This is the technique for maintaining a meadow orchard for optimum production and dwarf tree size. The height of plants is restricted to 1.0 m, while an average production of 10-12 kg fruits plant-1 is obtained every year. As harvesting is easy in a meadow orchard, no damage occurs to the fruits. Seven guava varieties, viz. Allahabad Safeda, Sardar, Shweta, Lalit, CISH-G-5, CISH -G-6 and hybrid (Lalit x Shweta) evaluated under meadow orchard system showed positive impact of the technology. 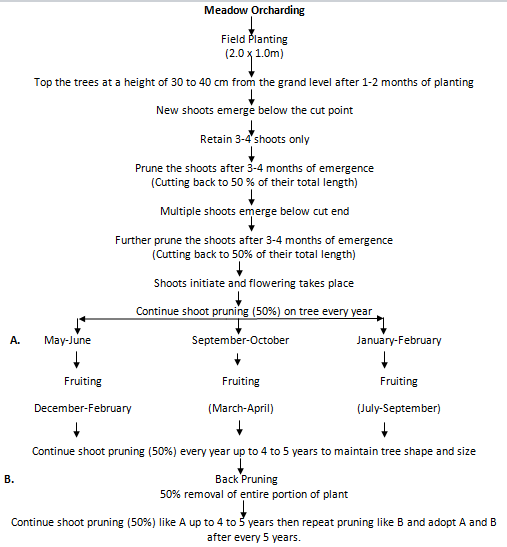 • In May month dig the pits of 50x50x50 cm size, fill them with mixture of 5 kg FYM, 500 g Single Super Phosphate 25 gm each Azotobacter, PSB and Trichoderma good top soil.

• Planting of guava layers / grafts at above recommended distance in the last week of June.

• Beheading of plantlet at the 60 cm plant height after two months of planting (September).

• Keep maximum four branches (shoots) which equally spread in four directions for development of primary frame work of plants (November). Furthermore, prune again these shoots (i.e. primary branches) in January (i.e. three months after beheading) by heading back to 50 % of their total length

• Eventually, employ 50% heading back of secondary shoots (branches) second fortnight of May (i.e. 3 months after heading back of primary shoots) to facilitate the first fruit crop during winter season (November-December).

• For undertaking two fruit crops in a year, twice pruning during May & January) coupled with twice nutrient application (June & January) in each year are pre requisite needs of this technology.

• Accordingly follow the following package of nutrient management for first 3.5 years of duration.

• This particular schedule of pruning and nutrient management is confined only to the initial period (i.e. first 3.5 years) of orchard management.