Pre-harvest fruit bagging is becoming an important practice in different parts of world to reduce the incidence of insect-pest and diseases and improvement in colour, fruit finish and quality of fruits. In India, this technology has also been standardized for some fruits like apple, pomegranate, guava etc...
Fruit Bagging Technology for Winter-season Guava
Author: R.R. Sharma, A. Nagaraja and Amit Goswami
ICAR- Indian Agricultural Research Institute, New Delhi-110 012


Guava (Psidium guajava L.) is the 5th most important commercial fruit crops of India, ranking fifth after mango, banana, citrus and papaya in production. It is usually called as poor man’s fruit because it is available throughout the year at cheaper rates than other fruits. It is a very good source of pectin, vitamin C, fibers and carotene and lycopene. Guava trees usually flower twice a year, and hence produce two crops in a year i.e., rainy season crop (July-August) and winter season (November-January) crop. Since the rainy season crops is severely infested by fruit fly and fruits are insipid and of very poor quality, scientists have recommended to take winter season crop instead of rainy season crop. Thus, instead of two crops, farmers usually take only one crop of guava. For the control of fruit fly, several insecticides are used, which not only require heavy investments but fruits contain their residues, causing several health problems to consumers. Hence, worldover, several attempts have been made to search out for a eco-, farmer- and consumer-friendly technique for controlling this pest and also improve fruit finish and quality for better consumer acceptability. Scientists at the Division of Fruits & Horticultural Technology and Food Science & Postharvest Technology, IARI, New Delhi have attempted pre-harvest fruit bagging in guava and came out with wonderful results.

The guava fruits at marble stage of development are bagged with single-layer nonwoven spun-bound polypropylene fabric bags or single layer net bags. The bags removed on the date of harvest or a day before harvest. During the bagging, there is no need of using any insecticide. All other cultural practices such as use of fertilizers, plant growth regulators, irrigation etc., are followed routinely. The harvested produce is virtually free of fruit fly, and the fruit finish, colour and quality are excellent, and even if farmers spray any of pesticides, the residue in the produce is negligible.

Advantages of the technology 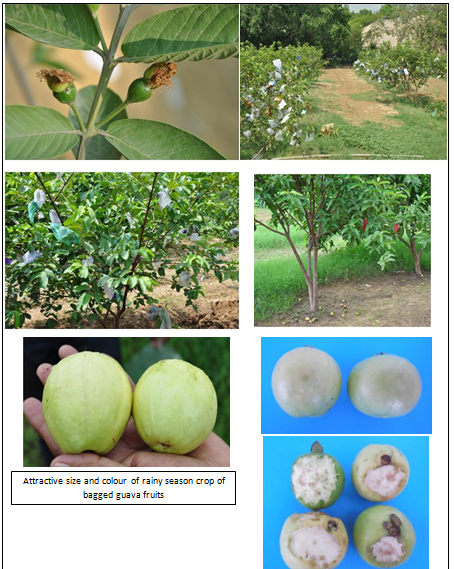 About Author / Additional Info:
Working on production and postharvest management of fruits and vegetables for the last 32 years. I have published more that 130 research articles in journals of international repute. Authored 12 books, 250 popular articles and received several awards and honours of ICAR and Govt. of India