DNA Barcoding: Differentiation of Boerhaavia Diffusa From Other Species

A technique called internal transcribed spacer (ITS) DNA Barcoding is applied to discriminate Boerhaavia diffusa from its other species. Adulteration of B.diffusa with other species of Boerhaavia like B.erecta, B.coccinea, B.repanda and B.verticillata are commonly observed. ..
Introduction

The local name for Boerhaavia diffusa is Punarnava which is utilized in Ayurvedic and Unani medicine. To elevate the biosafety and efficacy of the drug prepared from B.diffusa, its collection and identification is very much essential. A technique called DNA Barcoding is applied to discriminate B.diffusa from its other species. The plant is consumed in the treatment of several liver disorders and jaundice. It is used as carminative and possesses diuretic, anti-convulsant, anti-inflammatory, and fibrinolytic properties. B.diffusa is found to be contributing two pharmaceutical key alkaloids called Punarnavine-1 and Punarnavine-2. These compounds are known to be grouped under quinolizidines.

The plant specimen can be established using DNA barcodes which is employed as a reliable, simple and efficient tool of Pharmacognosy. DNA barcodes are used to wipe out the misunderstandings in the identification of plant morphology. As the evolutionary rate is different in different taxonomic levels, nuclear ribosomal internal transcribed spacer (ITS) region is considered as a usual marker in all the evolutionary research studies. An intergenic spacer, psb A-trnH present in the chloroplast is reported to be identified in the species of Dendrobium belonging to Chinese pharmacopoeia. Hence, psb A-trnH is considered as an ultimate DNA barcode identifier.

It has been discovered in a recent study that variations in the sequence will help in constructing a specific marker for the authentication and identification of drug and herbal preparations. The current research study will help in evaluating the ideal DNA barcode identifier used for discriminating the B.diffusa from its other species, used in adulteration.

The four species of Boerhaavia are collected from the western ghat regions at Coimbatore, India. The genomic DNA was isolated from the fresh leaves of all these plants by using the CTAB method. The amplification of ITS gene and psb A-trn H gene is performed in the presence of Taq polymerase using the reverse and forward primers of these two genes. The amplified products are collected and subjected to electrophoresis. Then the genes of ITS and psb A-trn H are purified and sequenced. The sequences of both the genes are later stored in GenBank database of NCBI. Further, the gene sequences are subjected to sequence alignment using Clustal W and MULTIALIGN web interfaces. The sequence is identified at the species level with the help of BLAST run using these two sequences. Phylogenetic trees were built using MEGA 4.0. The intraspecific differentiation among the various species was measured using MEGA 4.0. To evaluate the Wilcoxon signed rank, StatsDirect was utilized to carry out the calculations easily.

Results of the study

The genomic DNA isolated from B.diffusa, B.erecta, B.repanda and B.verticillata was used for amplifying ITS and psb A-trn H genes with PCR method. The amplified sequences were submitted to GenBank. The accession numbers of the sequences of these two genes from GenBank constitute randomly HQ386701, HQ386696, HQ407399, HQ386695, HQ386689, JF423303, HQ386691, and HQ386690. The ITS gene sequences of 11 Boerhaavia species were collected from GenBank and were utilized for sequence alignments.

The below diagram describes the phylogenetic trees of the four Boerhaavia species constructed using ITS1, ITS2 and psbA-trnH. 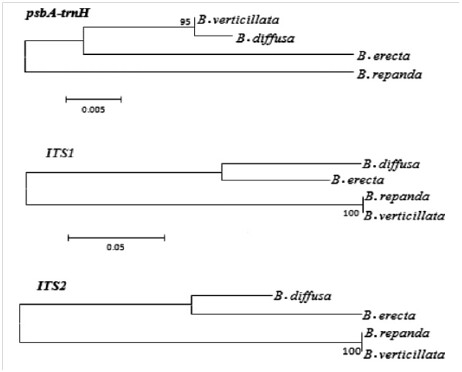 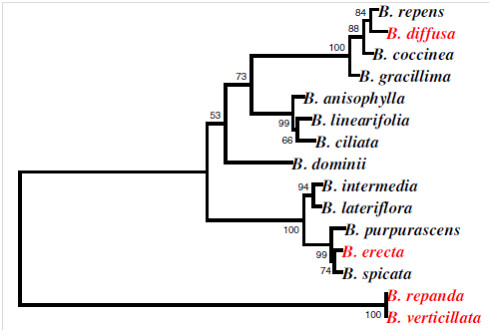 The variations in nucleotides of the two genes ITS and psb A-trn H were analyzed among several species of Boerhaavia. The variation percentage shown in the figure below indicates that ITS exhibits greater inter-specific divergence. 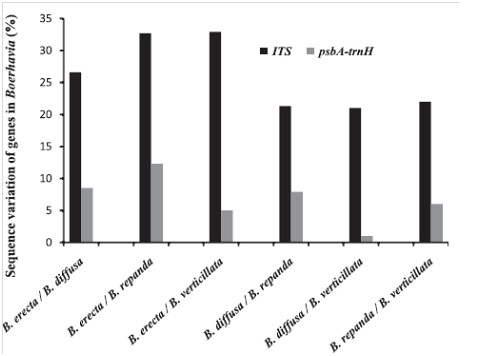 The statistical test called Wilcoxon rank test was performed to determine the variation extent of ITS1 when compared to ITS2 and psb A-trn H genes. The statistical test results indicate that there was significant variation in the ITS1 sequence compared to the other two genes across several species of Boerhaavia dealt in this study. Sequence analysis methods like BLAST1 and Distance were also performed to indicate that ITS1 shows a greater percentage of identification at the species level.