CRISPR/Cas allows simultaneous targeting of a single or multiple genetic loci in one or several Gemini viruses. The simplicity and robustness of the CRISPR/Cas technology will make it possible to respond to newly emerging strains by deploying appropriate sgRNA transgenes into a crop. However, despite clear advantages, the use of the CRISPR/Cas technology for engineering Gemini ..
Engineering Plant Immunity: Using CRISPR or Cas Technology
Authors: Ashok Kumar, Ansheef Ali

Plants represent a rich source of nutrients for many organisms including bacteria, fungi, protists, insects, and vertebrates. Although lacking an immune system comparable to animals, plants have developed a stunning array of structural, chemical, and protein based defenses designed to detect invading organisms and stop them before they are able to cause extensive damage. Humans depend almost exclusively on plants for food, and plants provide many important nonfood products including wood, dyes, textiles, medicines, cosmetics, soaps, rubber, plastics, inks, and industrial chemicals. Understanding how plants defend themselves from pathogens and herbivores is essential in order to protect our food supply and develop highly disease resistant plant species.

Plant diseases or phyto-pathogens (bacteria, fungi, viruses, and pests) affect plants right from the planting stage up to harvesting and storage of the product. For plants to survive the harmful effects of those antagonistic interactions, they must overcome the pathogenic mechanisms that results in the disease process. Consequently, they have evolved several different defense mechanisms by which they defend themselves against these microbial infections. These defense mechanisms or immunity is termed basal resistance, a term referring to two distinct aspects of plant-pathogen interaction: constitutive (physical barriers to pathogens) and induced (non-specific pathogen elicited) defenses.

Broadly defined, disease is any physiological abnormality or significant disruption in the “normal” health of a plant. Disease can be caused by living (biotic) agents, including fungi and bacteria, or by environmental (abiotic) factors such as nutrient deficiency, drought, and lack of oxygen, excessive temperature, ultraviolet radiation, or pollution. In order to protect themselves from damage, plants have developed a wide variety of constitutive and inducible defenses. Constitutive (continuous) defenses include many preformed barriers such as cell walls, waxy epidermal cuticles, and bark. These substances not only protect the plant from invasion, they also give the plant strength and rigidity. In addition to preformed barriers, virtually all living plant cells have the ability to detect invading pathogens and respond with inducible defenses including the production of toxic chemicals, pathogen degrading enzymes, and deliberate cell suicide. Plants often wait until pathogens are detected before producing toxic chemicals or defense related proteins because of the high energy costs and nutrient requirements associated with their production and maintenance.

There are two major layers of biochemically induced plant immunity. These comprises; pathogen-associate molecular patterns (PAMPs)-triggered immunity (PTI) and effector-triggered immunity (ETI). PTI is initiated by the perception of microbe conserved PAMPs, such as bacterial flgellin and elongation factor Tu (EF-Tu), with specific plant cell. Surface pattern-recognition receptors (PRRs), PTI usually activates some early resistance responses, including stomatal closure, activation of mitogen-activated protein kinase (MAPK) cascades, transcription of resistance-related genes, reactive oxygen species (ROS) production and callose deposition. ETI on the other hand was thought to a form of accelerated and amplified PTI response. It is activated by plant intracellular resistance (R) genes (proteins) after specific perception of pathogenic effectors, and is associated with programmed cell death, a response which is referred to as the hypersensitive response (HR). Natural selection results in new R specificities so that ETI can be triggered again. So this natural selection will ultimately decide the susceptibility or resistance of host. 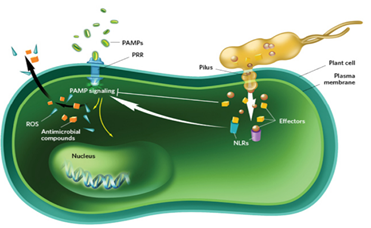 Viruses are well-known to be one of the major concerns for agricultural production and food security throughout the world. It is estimated that viral agents are responsible for the half of emerging diseases reported in plants. The control of plant viruses is often dependent on the use of pesticides; however, such strategy has many adverse environmental effects. In many plant virus-related outbreaks, the disease management is difficult to accomplish due to the variability of factors affecting the development of the disease, such as local climate conditions, plant aging, crop varieties, vector transmission efficiency and severity of viral strains. Unlike other pathogens (i.e., fungi and bacteria), plant viruses cannot be controlled chemically and a combination of cultural practices, biosecurity measures, organism vector management and plant genetic resistance is needed to deal with the disease.

So to generate a plant which is resistant to virus is a difficult task. For that there were basically two approaches, breeding and genetic engineering approaches. Later approach includes number of strategies in which newly arising genome editing tools are highlighting once. These are the tools that can insert, delete, or modify the DNA by using artificially engineered enzymes (site specific nuclease) 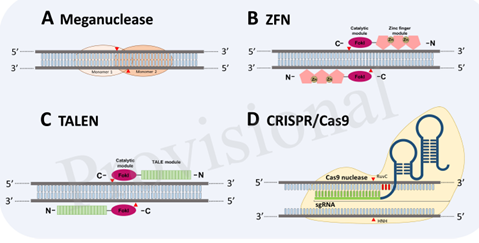 There are four major classes of SSNs: meganucleases, zinc finger nucleases (ZFNs), transcription activator-like effector nucleases (TALENs), and clustered regularly interspaced palindromic repeats/CRISPR-associated. These techniques have been harnessed independently to improve crop plant resistance to viruses directly by targeting viral genomes or by targeting host factors. Out these various tools by considering various points like off target cleavage, absence of off targets in plant genome, difficulty in designing construct one can say that CRISPR/Cas9 is the most promising one of these all genome editing system.

CRISPR stands for clustered regularly interspaced short palindromic repeats were fortuitously discovered in Escherichia coli in 1987. More than 87% of archaeal genomes and more than 45% of bacterial genomes carry at least one CRISPR locus. These are actually one of the resistance mechanism towards the infecting bacteriophage or extra chromosomal DNA (plasmid). Along with these CRISPR loci, protein encoding CRISPR associated genes are present upstream and reported in almost all loci across the several bacterial genome, which is required for cleavage of target. 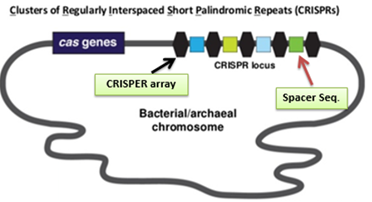 Complete process of this immunity is divided in to two phases


About Author / Additional Info:
We are currently pursuing Ph.D in Biochemistry from Indian Agricultural Research Institute.