Selectable marker gens have been extraordinarily useful in enabling plant transformation because of the low efficiency of transgene integration. The most used SMGs encode proteins resistant to antibiotics or herbicides and use negative selection , i.e., by killing non transgenic tissue. Transformation using marker not based on antibiotic or herbicide resistance gene, as well as..
A Brief Guide to marker free transgenic plants...

The development of genetic engineering has led to the creation of transgenic crops. The directed desirable gene transfer from one organism to another and the subsequent stable integration and expression of a foreign gene into the genome called genetic transformation. Selectable marker genes are widely used for the efficient transformation of crop plants. In most cases, selection is based on antibiotic or herbicide resistance. A main reason for using the marker genes in the development of transgenics is to distinguish the transformed cells from that of non-transformed cells. To produce transgenic plants, selection systems are used that lead to the selective growth of transformed cells. Genes encoding for resistance to specific antibiotics or herbicides have been found to be particularly effective for selection and provide a means for rapidly identifying transformed cells, tissues, and regenerated shoots. However, because SMGs [selectable marker gene] are integrated into the plant genome, there are concerns about widespread occurrence of transgenes in novel ecosystems (e.g., antibiotic resistance in crops and their agro ecosystems). Gene transfer from plants to environmental or medically related bacteria, or from plant products consumed as food to intestinal microorganisms or human cells, are generally considered to be not likely, but the inherent risks have not been totally addressed, and therefore there remain both regulatory and public concerns in many places in the world.

Marker gene: Powerful tool for identification of transformation events before the gene of interest can be identified in the culture. Gene transfer or DNA uptake refers to the process that moves a specific piece of DNA into cells.

Once a gene has been isolated and cloned (amplified in a bacterial vector), it must undergo several modifications before it can be effectively inserted into a plant. Simplified representation of a constructed transgene, containing necessary components for successful integration and expression.

Co-tranformation : Co-transformation is a method for production of marker free transformants based on Agrobacterium- or biolistics mediated transformation in which a Selectable Marker Gene (SMG) and gene of interest are on separate constructs.

Three approaches are used for co-transformation 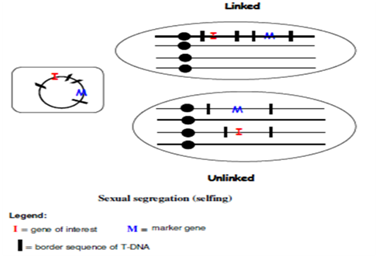 Transposon based system: Transposons are DNA sequences between hundreds to thousands of bases long. They code at least one protein, which enables them to replicate. Use of transposable elements for marker gene removal involves several steps: 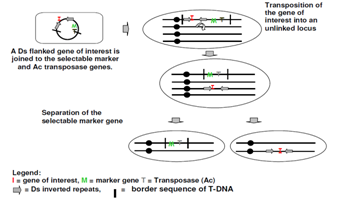 Figure 3: A Ds flanked gene of interest is joined to the selectable marker and Ac transposons genes.

Selectable marker gens have been extraordinarily useful in enabling plant transformation because of the low efficiency of transgene integration. The most used SMGs encode proteins resistant to antibiotics or herbicides and use negative selection , i.e., by killing non transgenic tissue. Transformation using marker not based on antibiotic or herbicide resistance gene, as well as different system of marker gene deletion strategies implemented. These strategies in crops and their further improvement will help to expedite widespread public acceptance of agricultural biotechnology.

The efficient and practical approaches are still needed in order to introduce multiple genes into plant genomes. Transformation efficiencies can be enhanced to a level at which the use of selectable markers becomes unnecessary. Improvement of existing strategies and the development of novel approaches for plant genome manipulation are required.

10. Iamtham S. and Day A.(2000). Removal of antibiotic resistance genes from transgenic