Introduction:
Plasmids were first studied in 1903 by Walter S. Sutton and Theodor Boveri. They developed a hypothesis called the chromosome theory that consisted of describing how genes are located on chromosomes. Then, in the mid-1900s, "plasmagenes" were discovered. Plasmagenes explain the possible mechanisms of inheritance of acquired traits. Thus, plasmagenes were a result of the chromosome theory and the higher focus on genetics. In further pursuing the study of genetics, scientists discovered that bacteria have "extrachromosomal hereditary determinants," as Joshua Lederberg (1952) once put it. By saying this, he is referring to how bacteria have extra pieces to it which are in fact plasmids. Later, scientists discovered that these plasmids could be used to easily manipulate the genes of organisms, revolutionizing the biotechnology industry.

• Plasmids are self replicative extrachromosomal DNA molecules of finite size that are stably inherited and exchanged promiscuously between a broad spectrum of bacteria and other domains.

• Plasmids allow bacterial (including other domains) populations to 'sample' the horizontal gene pool for adaptive traits that might be advantageous for survival under local selective pressure.

Plasmid size varies from 1 to over 1,000 kilo base pairs (kbp). The number of identical plasmids within a single cell can range anywhere from one to even thousands under some circumstances. Plasmids can be considered to be part of the mobilome, since they are often associated with conjugation, a mechanism of horizontal gene transfer 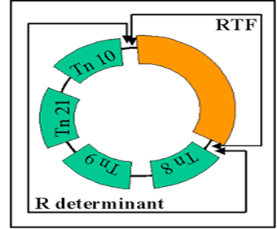 In order to transfer a plasmid, the bacterium with the plasmid must have the genetic instructions required to construct a sex pilus-a prokaryotic cell extension that can hook up to a recipient bacterium, connecting the two bacteria and physically pulling them towards each other. The genetic information for making a pilus is called the F (fertility) factor. The donor bacterium, which is considered F+, makes a copy of the plasmid and extends the pilus to the recipient (the F- cell). The newly copied plasmid is then transferred to the recipient. In the end, both the donor and the recipient bacteria have a copy.

Although plasmids are most often exchanged between closely related bacteria, some plasmids can be shared by very dissimilar microbes. A donor and a recipient do not always need to be of the same species in order to share a plasmid. Plasmids can even be shared between different cell types, such as when a bacterium (prokaryotic cell) shares a plasmid with a eukaryotic microbe, such as yeast. 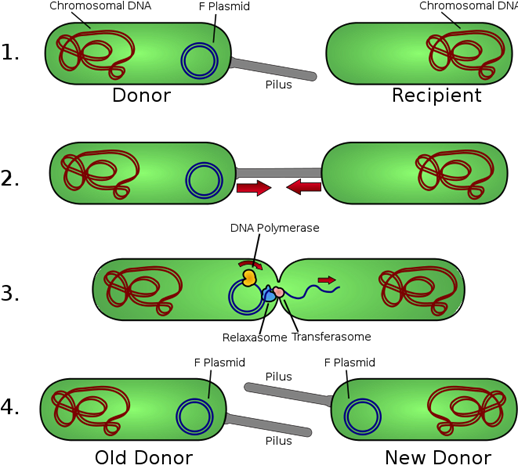 Types of Bacterial Plasmids
There are many different types of plasmids, in addition to F factors mentioned above. Plasmids called R factors carry genes for antibiotic resistance, or resistance to chemicals that, without the plasmid, would be toxic to the bacterium. MRSA (methicillin-resistant Staphylococcus aureus) is a disease-causing type of bacteria that, due to the acquisition of R factors, is resistant to a wide range of antibiotics, and is able to cause dangerous, difficult-to-treat infections.
Bacteriocin factors carry genes for making proteins that kill other bacteria that do not have this factor, reducing competition for the bacteria that have it. Other plasmids, called virulence factors have genes that help bacteria cause disease, such as the productions exotoxins that make those infected with the bacterium ill, or genes for adhesins, that allow the bacterium to adhere to and infect certain host cell types.

1. Fertility/ F plasmid: plasmid: Which contain tra gene. They are capable of conjugation.


2. Resistance plasmid/ R plasmid: Plasmid which contains gene that provides resistance against antibiotics or poison. Discovered in Shigella dysentriae- during an outbreak of dysentery in Japan.

7. Virulence plasmid: plasmid that turns the bacterium into a pathogen Ex: Ti plasmid in Agrobacterium tumefaciens.

Function:
Plasmids are pieces of DNA that can be manipulated through the use of restriction enzymes. Since these plasmids are already in the bacteria, the restriction enzymes are able to act as "molecular scissors" and cut up the part of the plasmid that is desired to be changed. Then, the gene of interest is inserted as a new part of the plasmid, allowing the bacteria to now demonstrate this gene. Overall, plasmids have transformed biotechnology by permitting us to manipulate the genes within bacteria and thus gain lots of different experimental results along with valuable information. On top of allowing genetic engineering to occur, plasmids serve as a basis for bacterial transformation. Bacterial transformation is the idea that bacteria can pass along plasmids through transformation. In doing so, the genetically engineered plasmids can pass on whatever gene of interest they contain to other bacteria. For example, if a plasmid is already engineered through the use of restriction enzymes to be resistant to penicillin, then the plasmids being passed on to other bacteria should make them also resistant to penicillin.


About Author / Additional Info:
I am currently pursuing Ph.D. in Plant Pathology from JNKVV Jabalpur MP.