Carrot, scientifically known as Daucus carota is a classified root vegetable. Globally, it is one of the highest consumed table vegetables and always a part of number of dishes and cuisines. Carrot, mostly grown for its edible root, is a biennial herb and belongs to the family Apiaceae. It is usually orange in colour but chromatic dimorphism in their roots such as white, black, yellow, red and purple are found in nature (Fig 1). Besides being used for table purposes, the carrot family (apiaceae) also includes many other species that are used as vegetables and herbs. The family includes economically important crops such as cumin, coriander, celery, parsley, fennel, and parsnips that are mostly used as condiments.

Domesticated carrot plant that we know today originated from the wild carrot which was native to Europe and south western Asia1. It is reported that central Asia is the centre of diversity of carrot and reportedly the first cultivation of carrot (approximately 1,100 years ago) for its root was in the Afghanistan region. Long before carrot was domesticated, wild carrot had become widespread2, as seeds were found in Europe dating back nearly 5,000 years ago. During its journey across centuries and continents, countless botanists managed to improve the composition, look, flavor and size of the ancient carrots and produce the modern orange-colored carrot that appeared first in 17th century in the Netherlands.

Carrot is one of the top ten economically important vegetables grown in world. China holds the record of world's largest carrot producer followed by the United States and Russia. China alone accounted for over 45% of the global production in 2011. Currently, world production of carrots is 18,443,000 tons with the European Union production pegged at 6,000,000 tons. France with 670,000 tons production leads the list among European producers followed by the United Kingdom, Italy and the Netherlands.

Carrots are seasonal vegetables and prefer cool weather conditions. Though, seeds of carrot germinate at low temperatures, the germination period is shorter at higher temperatures and soil temperature of at least 10ºC is preferred for germination. Economic part of carrot i.e. the roots; grow faster at a temperature between 15ºC and 18ºC. The carrot roots are one of the most important sources of carotenoid and precursor of pro-vitamin A. These roots are rich in numerous vitamins such as vitamin A, vitamin C, vitamin K, vitamin B8, pantothenic acid, folate; and minerals such as potassium, iron, copper, and manganese. Carrots derive their color from the pigment producing compounds i.e carotenoids (Fig 1). While, orange carrots are rich in alpha- and beta-carotene, red carrots get their color from lycopene. Lycopene and lutein in red and yellow carrots are also nutritionally important carotenoids. Because of their intrinsic antioxidant capacity these carotenoid compounds play an essential role in human health by preventing disease.

Genetics and genomics of carrot

Currently, many crop genomes have been deciphered3,4,5 and the explosion in genomic resources has been harnessed for crop improvement 6. For carrot improvement, the genome has been de-coded by a group of scientists lead by Dr Philipp Simons in USA7. They used a widely cultivated diploid (2n = 2x = 18) species of carrot (D. carota var. sativus L.) that had genome size of 480 Mb. To decode the genome, a doubled haploid orange Nantes type carrot (DH1) was used for whole genome sequencing. Further, to facilitate the process of de-novo genome assembly7, seeds from self-pollinated DH plant that are completely homozygous were used for sequencing.

Genome sequencing information and further bioinformatic characterization predicted presence of 32,113 genes in carrot genome. Additionally, 564 tRNAs, 31 rRNA, 532 small nuclear RNA and 248 microRNAs belonging to 46 families were also predicted. The genome had 46% repetitive elements and transposon elements represented 98% of these elements. The authors3 through comparative phyllogenomics analysis, reported that carrot evolved from tomato/potato 90.5 million years ago while it diverged from grape lineage approximately 113 million years ago. Notably, this is the first completed genome sequence for an Apiaceae species and analysis of the whole-genome sequence allowed identification of gene(s)/pathway that regulates accumulation of carotenoids in the roots.

Gene expression in plants is regulated by multitude of molecular drivers known as transcription factors (TFs), transcription regulators (TRs), and chromatin regulators (CRs). They control down-stream structural gene expression/enhance gene expression by chromatin remodeling. To understand this genomic network in carrot and establish the role of evolution in expansion and contraction of gene regulatory network the authors annotated all putative TFs, TRs and CRs in the carrot genome8. Through comparative genomics of orthologous gene clusters across multiple genomes, it was observed that carrot regulatory genes belonged to 13,881 families. Additionally, 3,267 unique regulatory genes were predicted in the carrot genome in comparison to tomato (3,209), potato (4,435), grape (2,297), and Arabidopsis (4,028) genomes. Among them (2,700 genes) largest proportion of regulatory genes in carrot were classified as TFs7. While occurrence of regulatory genes is much higher in carrot compared to other crops, one noteworthy regulatory gene family is JmjC that codes zinc-finger regulatory genes. It is speculated that these regulatory genes along with others regulate plant architecture and flowering time by modulating cytokinin signaling and circadian clock in carrot.

Disease resistance is governed by resistance (R) gene clusters in plants as they provide a reservoir of genetic diversity against evolving plant pathogens. Using a specialized bioinformatic tool, the MATRIX-R pipeline, 634 putative pest and disease resistance (R) genes were predicted in carrot. It was observed that, unlike regulatory genes that are over represented, most R gene classes were under-represented in carrot. The R genes present in carrot broadly belong to two different classes such as (i) NBS and LRR containing domains (NL) and (ii) coiled-coil NBS and LRR containing domains (CNL). A QTL controlling resistance to a major carrot pest Meloidogyne javanica “Mj-1” has also been identified in carrot genome and is found to harbor three receptor like kinase genes and one LRR gene that offer broad spectrum resistance to nematode invasion.

Carotenoids are primarily responsible for the orange color of the carrot and for the colors of many other fruits and vegetables such as sweet potatoes, orange, and melon. They were first discovered in carrot and hence are named accordingly. The carotenoids represent a group of isoprenoid molecules synthesized by all photosynthetic organisms and few non-photosynthetic fungi and bacteria. Their characteristic yellow, orange, and red colors are due to the presence of a number of conjugated double bonds in a polyene chain that functions as a chromophore. The core pathway/biosynthesis of the carotenoids in plastids from isoprenoid precursors in photosynthetic plants are well established. Before the domestication process, the root of carrot plants was white. Intensive breeding along with varietal development generated carotenoid-rich colored varieties in carrot including the widely popular orange carrots that accumulate very high levels of the pro-vitamin A (β-carotene). Although homologs of all known carotenoid biosynthesis genes have been identified in carrot, biosynthesis and molecular regulation of its accumulation in non-photosynthetic storage roots of carrot has been an enigma. With unraveling of the carrot genome sequence the pathway has been identified using contrasting genotypes and set of genetic mapping populations. It has been delineated that DCAR_032551 is the gene that regulates carotenoid accumulation in both yellow and dark orange type of carrots. Supplemented with gene ontology study, it is concluded that isoprenoid pathway genes are particularly enriched in the carrot roots. Inter alia, several light induced genes including photosynthetic activation, plastid biogenesis and chlorophyll metabolism genes are also over expressed in carotenoid accumulating roots. Thus, DCAR_032551 gene that is coexpressed with isoprenoid biosynthesis and upregulation of photosystem due to over expression of light induced genes is a de novo method of carotenoid accumulation in otherwise non-photosynthetic orange and yellow carrot roots. The genomic wealth provided by deciphering carrot genome sequence7 is expected to provide support in carrot improvement programs and improve human health globally. 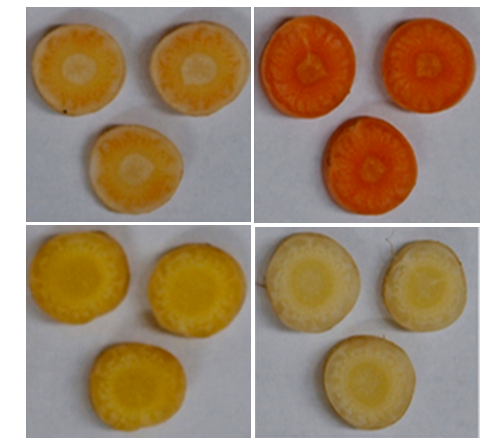