What is the need for development ofC4Rice?

After 40 years, each remaining hectare will have to feed at least 43 people .This means that yields must be increased by at least 50% over the next 40 years to prevent mass malnutrition for the 700 million Asians that currently rely on rice for more than 60% of their daily calorific intake. Evolution has increased photosynthetic efficiency by 50% in the form of theC4pathway so we can harness the nature potential by developingC4rice. Apart from thisC4rice can improve water and nitrogen use efficiency.

• The wild rice resources are still underutilized for physiology and photosynthesis screening.

• 0. rufipogon is a suitable candidate for improving photosynthesis in rice as it has much lower photorespiration rate. Likewise 0. australiensis has increased PEPC activity and few 0. nivara accessions have low C02 compensation point.

Steps that can be followed for development ofC4Rice 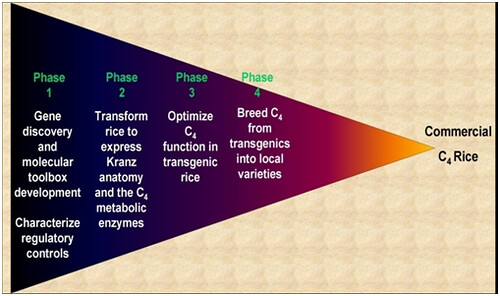 • They have two biochemically and morphologically different chloroplast types, which are spatially separated between two cytoplasmic domains within individual photosynthetic cells

• In Suaeda aralocaspica, two chloroplast types are arranged in elongated chlorenchyma cells, proximal and distal with respect to the internally located veins

• In contrast, Bienertia cycloptera and Bienertia sinuspersici show a more unique cell morphology. They have one chloroplast type distributed throughout the periphery [P-CP] of the cell and the other chloroplast type [C-CP] concentrated in a central compartment (CC) along with the mitochondria and peroxisomes, forming a ball-like structure in the center of the cell.

• If PEPC, PPDK, and NADP- ME can be overproduced, the C4-like pathway of Hydrilla might operate in the mesophyll cell of C3 plants. The activity of NADP-MDH in C3 mesophyll cells is high, and it is considered that activation of the endogenous enzyme may be sufficient for operation of the pathway.

• B. sinuspersici is an important system for future study, since its chloroplast differentiation is analogous to Kranz-typeC4species.

• Given the access to advanced technologies, sustainable funding and co-ordinated global efforts could lead to significant development towardsC4rice in near future