The purification methods available for alpha amylases are usually laborious and involve multi steps. These procedures result in low yields of the enzymes. The protocols for purification of the enzyme in few steps were developed. Affinity precipitation as an important early step would be beneficial. It is investigated well for using affinity precipitation as the single step purification method of soya bean alpha-amylases. This study focuses on the examination of purified soya bean alpha amylase with respect to temperature, activation energy, Michaelis constant, pH, thiol modifying reagents, EDTA and the effect of metal ions. 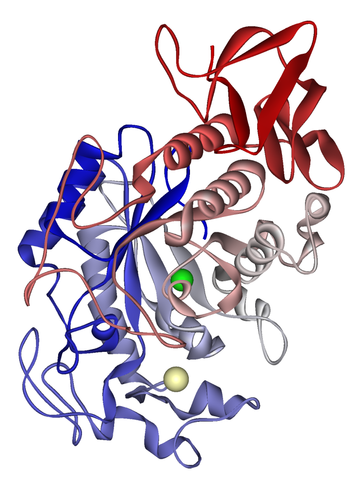 The activity of alpha amylase was evaluated using the Bernfeld method which uses starch as substrate. The enzyme amount that is required to produce 1 micromole of maltose per minute from the soluble starch constitutes one unit of alpha amylase. This production of enzyme occurs at 27 degree Celsius and at pH 5.5 under special conditions.

The estimation of protein is carried out by Lowry method using Folin-Ciocalteau reagent adjusted with crystalline BSA. Alginate solution is prepared using sodium acetate buffer and stored at 4 degree C. The soya bean seeds are soaked in sodium acetate buffer for about eight hours and are homogenized and filtered through muslin cloth. The filtrate is centrifuged to collect the supernatant which is purified by affinity precipitation. The supernatant is called as a crude soya bean extract.

The crude soya bean extract is mixed with alginate solution, which is precipitated with calcium chloride solution. The calcium alginate beads created with calcium chloride are washed later with distilled water. The beads were considered as entrapped enzymes. The bound enzyme activity was eliminated by the addition of maltose and the resultant product was centrifuged. The resulting supernatant was collected and the process was repeated till the activity of the enzyme was nil. The supernatant was dialyzed with sodium acetate buffer and they were concentrated with sucrose. The pure and concentrated enzyme is stored at -20 degree C.

The purity of the enzyme is checked using 12percent native PAGE. The impact of temperature on the hydrolytic activity of starch was evaluated using standard assay conditions by using starch as the substrate and incubating the mixture at 5 to 100 degree C for 3 minutes in sodium acetate buffer. The impact of pH on the hydrolytic activity of starch was observed with Tris-acetate buffer in the presence of standard assay conditions in the pH range of 4 to 9. The enzyme activity was measured at different temperatures by plotting log V against 1/T resulting in the calculation of energy of activation. The kinetic aspects of the alpha amylase for potato starch was estimated at pH 5.5 and at 30 degree C. The Michaelis constant and maximum velocity were calculated by non-linear regression curve fit. Substrate specificity was also determined by using various substrates in the assay. The impact of metal ions and thiol modifying reagents on enzyme activity was studied by assaying the enzyme activity.

Results of the study

Apart from other conventional methods that require intense purification procedures, soyabean amylase was purified recently in a two step process using ammonium sulfate and starch-SPIO (superparamagnetic iron oxide) method. The SPIO method purified only 17.5percent of crude enzyme. The purified alpha amylase was found to be active at pH 5.5 and was found inactive at pH 4.5. The activity of the enzyme increased with increase in temperature to 75 degree C, while the activity declined with further increase in temperature. The enzyme stability is maintained for about 5hours even if its activity is declining.

The energy of activation for the alpha amylase enzyme was determined by Arrhenius plot as 6.14 kcal/mol from 10 to 40 degree C. The non-linear regression curve fit has calculated the Vmax as 0.2677 and the Michaelis constant Km as 2.427 mg/ml for the substrate as potato starch. The Km values were lower for alpha amylases in wheat Sakha as 0.57 and 1.33 mg starch/ml and mung beans as 1.6mg/ml. The alpha amylases of maize and millet had higher Km values as 12.5 and 5.8 mg/ml.

The metal ions like sodium, potassium and magnesium did not show any effect on the enzyme activity. Calcium, Aluminum, cadmium, and copper activated the enzyme till the concentration reached 1mM and Nickel could activate it up to 2mM. The increase in metal ion concentration will reduce the activity of enzyme further.

Cobalt and manganese show activating effect with high concentration of these ions in the reaction mixture. The impact of different concentrations of EDTA on alpha amylase activity was patterned in the presence and absence of substrate. When the substrate is present, the inhibition was observed as 18 percent by 12.5mM EDTA while in the absence of substrate, the inhibition was 66.2percent.