This article focuses on biology and genetic engineering of the most successful biopesticide Bacillus thuringiensis and how biotechnological tools have helped in improving upon the Bt toxin's efficiency as well as widening the host spectrum. Few strategies to cope with resistance development in insects are also dealt with...
Engineering Bt Toxins for Effective Insect Control

Bacillus thuringiensis (Bt), the most successful insect pathogen used for control of insect pests forms about 2% of total insecticidal market. It is a gram-positive, aerobic, spore-forming bacterium active against larval stages of different insect orders. The action of Bt relies upon crystal inclusions produced during sporulation (Bravo et al. 2007). These parasporal crystals consist predominantly of protoxin molecules known as δ-endotoxins, Cry toxins or insecticidal Crystal proteins (ICP) which are known to form pores in the midgut membrane and possess insecticidal activity when ingested by certain insects while being harmless to all vertebrates including humans. These pore forming toxins (PFT) are secreted as water-soluble proteins that undergo conformational changes in order to insert into the membrane of their hosts. The crystal inclusions dissolve in the larval midgut, where one or more protoxins of molecular weight of about 130 kD are released,
which are further solubilized and proteolytically converted into smaller toxic polypeptides of 60-70 kD. These activated toxins are attracted to the brush border membrane of the midgut cells through low affinity binding to glycosylphosphatidylinositol-anchored (GPI-) receptor proteins, such as aminopeptidase-N (APN) or membrane-bound alkaline phos-phatase (mALP). This initial binding step facilitates subsequent binding of higher affinity to cadherin-like receptors, which leads to further processing, resulting in oligomerization of toxin. Toxin oligomers display high binding affinity towards N-acetylgalactosamine (GalNAc) residues on GPI-anchored proteins, resulting in concentration of toxin oligomers on specific membrane regions, where they insert into the membrane forming a pore that leads to osmotic cell death. The toxin monomers have also been reported to bind to cadherin to activate intracellular signaling pathways that result in cell death. These activated Bt toxins are highly specific to the insect and very specific in their activity. For example, the toxins from Bt var. thuringiensis and var. kurstaki are exclusively toxic to lepidopteran insects whereas toxins from Bt var. tenebrionis and israelensis kill coleopteran and dipteran insects, respectively.

The ability to precisely introduce and express Bt genes in a variety of microorganisms as well as plants has led to delivery of these entomocidal proteins in a more targeted and effective manner, simultaneously resulting in significant reduction in the use of chemical pesticides. Another promising approach is targeting the endophytic bacteria inhabiting the plant for genetic engineering for systemic delivery of Bt toxin within the host plant tissues without the genetic manipulation of the host genome per se (Rai et al. 2007). 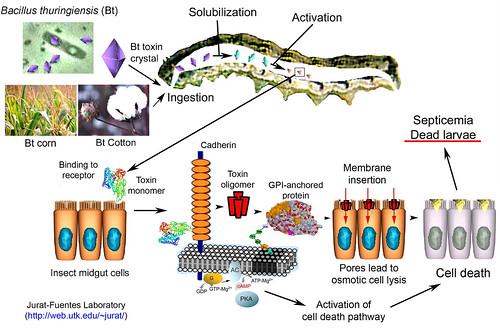 Cry toxins are classified based on their primary amino acid sequence similarity into 67 groups (Cry1-Cry67) comprising of about 500 different cry gene sequences. The largest group of cry toxins is the three domain cry toxins (3D) family. The 3D structure is conserved among members of this family suggesting similar mode of action but have very low amino acid sequence similarity. The carboxy (C) terminal is involved in crystal formation but does not form part of mature toxin as gets cleaved off in insect gut. The N-terminal is toxic and has three domains:

Besides 3D cry toxins family, there are three more Cry families viz. mosquitocidal Cry toxin (Mtx), binary like (Bin) and the Cyt family of toxins, which are phylogenetically unrelated and have different modes of action (Bravo et al., 2005). In contrast to these toxins produced during sporulation phase, some Bt strains produce insecticidal toxins during vegetative growth phase, named as VIP toxins.

Strategies to improvise upon the efficacy of insecticidal activity of Bt toxins are targeted to increase the affinity towards various receptors on BBMV, better pore formation, more potent toxin formation with broader host range. Molecular approaches utilized to enhance the toxicity of Bt toxin are as follows:

1. Site directed mutagenesis: Mutations are targeted to known residues in domain I to improve upon the pore formation or in domain II and III to increase the affinity of receptor. This technique has also resulted in novel toxin with a new specificity(Gatehouse et al. 2008).

2. Domain swapping to form hybrid toxins: Substitutions of domain III have resulted in production of novel toxins with wider host range and higher toxicity than either of the parental toxins. For e.g.: CryIAb hybrid toxin with domain III from CryIC showed ten times enhanced activity against Spodoptera exigua than each parent.

3. Fusion proteins: Addition of sequences from other insecticidal proteins to Cry toxins introduces extra functionality into Cry toxins (Walters et al. 2008). E.g.: Gal binding lectin domain from ricin was fused to C-terminal of domain III of CryIAc, this fusion protein could now bind to Gal residues in potential receptors in the insect besides binding to its own receptor N-acetyl galactosamine residues. This resulted in resistance to stem borer and leaf armyworm whereas unmodified CryIAc was susceptible to both insects.

Strategies to cope with insect resistance to Bt toxins

Development of resistance in insects to Bt is at present posing a major threat to use of transgenic Bt crops for insect resistance. The resistance to Cry toxins can be result of any mutation in the insect pest that affect mode of action of Cry toxins. Hence, a better understanding of detailed mechanism of Cry toxin functioning and how insects develop resistance will lead us to counter this threat. Presently, the approaches followed are:

1. High dose refuge strategy: This strategy entails the use of Bt crops that express high concentrations of Cry toxins and planting of refuges of non-Bt crops near Bt crops. Refuges are expected to maintain susceptible insect populations which when mate with resistant individuals, the heterozygous offspring are killed by the high Cry toxin in Bt crops, thus delaying evolution of resistance.

2. Bt gene pyramiding: Gene stacking of different Cry toxins with different mode of action in the same transgenic plant is another strategy in use. For e.g. Bt cotton Bollgard II expressing CryIAc and Cry2Ab proteins bind to different receptor molecules and since chances of mutation in both the receptors are minimal, the resistance development is delayed.