Biotechnology means use of living systems and organisms to make or modify products for specific use. Environmental biotechnology is that branch of biotechnology that addresses normal problems related to environment, such as removal of pollution and generation of renewable energy like biomass production; by using biological substances. This subject has an exciting future.

The main role of environmental biotechnology is to produce better approaches for sustainable development and for understanding processes in the natural environment. The driving force of biotechnology is abilities of microorganism to utilize pollutants as natural source of carbon.

Pollution is the most important of all environmental evils of the world. The word pollution has made a deep impact on today’s society who wants a green world for their future generation. Air Pollution kills many people in India every year because of so many respiratory problems it causes. In fact, pollution has destroyed the air quality of Delhi so badly that WHO considers it to be one of the worst polluted cities of world. Hence, it is of utmost importance that we find solution for reducing air pollution. It needs to be understood that many substances can contribute to pollution and any biologically active substance has the potential to give rise to a pollution effect.

It is a commonly known fact that microorganisms are the most popular biodegraders of nature. Microorganisms are available in a wide range of spectrum because of which biodegradation of many types of hazardous materials can be possible by providing diverse conditions of degradation. Physiological type of microorganisms used is the basis for type of biotreatment, such as fermenting anaerobic, anaerobically respiring (anoxic), microaerophilic, and aerobically respiring microorganisms. The types of biotechnological treatment of wastes can be enhanced by providing optimal environmental factors, availability of contaminants and addition of selected strain(s) biomass.

Classification of pollution can be made on the basis of the chemical or physical nature of the substance, its source, the environmental pathway involved, the target organism affected or simply its effect. The evaluation of pollutant’s general properties and the local environment can be used for classifying the nature of pollutants. This may include factors such as:

• Toxicity of the pollutant, that is, the potential damage by pollutant to life. More toxic substances can kill in a short time, while less toxic ones require a longer period of exposure to do damage.

• The duration of effect of pollutant.

• Capability of movement of pollutant makes it readily dispersible.

• Bioaccumulation of pollutant means the ability of pollutant to be accumulated in living system of organism after being taken up by it.

• The end products of breakdown of pollutant are more important as its toxicity will decide whether the pollutant is highly toxic or not.

In principle, it is the dilution of pollutants by being physically spread out, thereby reducing their effective concentration. The dispersal and the consequent dilution of a given substance depend on its nature and the specific pathway used to achieve this. It might happen, with varying degrees of dilution, in different mediums like air, water or soil.

Typically, large bodies of water or rivers has a good dispersal and dilution potential, but smaller watercourses clearly have a correspondingly lower capacity.

Movement through the soil represents another opportunity for the dilute and disperse approach, often with soil water playing a significant part, and typically aided by the activities of resident flora and fauna.

The principle behind this is opposite to the previous approach, in that instead of relying on the pollutant becoming dispersed by getting diluted, it is an attempt to gather together the offending substance and preventing its escape into the environment.

There are three prominent biotechnological tools by which air pollutants can be reduced tremendously, by using biological means.

The system of biofilter consists of a big vessel made of concrete, metal or plastic, which has a filter medium of organic material such as peat, bark chips and similar kinds. The gas to be treated is forced upon the filter. The medium has a good water-holding capacity and soluble chemicals within the waste gas dissolve into the moisture around the matrix. Bacteria, and other micro-organisms in the biofilter, degrade components of the solution, hence bringing the desired effect. The medium provides physical support for microbial growth, because of the large surface area to volume ratio, and also the voids rich in nutrients promote and sustain bacterial activity. Biofilters need to be watered constantly to maintain optimum conditions, but waterlogging needs to be avoided reduced efficiency. If biofilters are properly maintained, they can reduce odour from air by 95% or more. Usually, a biofilter has two or three phases, depending on the feeding strategy: 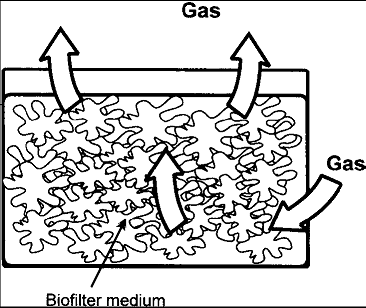 A biotrickling filter is an amalgamation of a biofilter and a bioscrubber. In this, an big vessel holds a filter medium, which is an inert material, often clinker or slag. It also has a large number of void spaces between particles. The microbes form biofilm on the surfaces of the medium. The odourous air is forced through the filter, while water continuously recirculates through it, trickling down from above, hence the name of the device. Thus a counter-current flow is formed between the rising polluted gas and the falling water, which improves the efficiency. The communities of biofilm feed on pollutants in the solution passing over them, and simultaneously biodegrades the constituents of the odour. By directly sampling the water recirculating within the filter vessel, process monitoring can be easily achieved. Surprisingly, the efficiency of the biotrickling filter is mostly similar to biofilter method, but it can deal with higher concentrations of pollutants and has a smaller foot-print than a biofilter of the similar capacity. 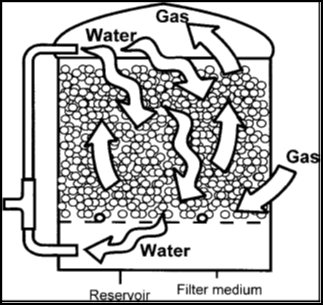 A bioscrubber is a highly efficient method of removing odour components by dissolving them. It is most appropriate for hydrophilic compounds like methanol. The gas to be treated passes through a fine water spray generated as a mist or curtain within the body of the bioscrubber vessel. The pollutants are absorbed into the water, which subsequently settles to form a pool at the bottom. The polluted solution is then removed to a secondary bioreactor where the actual biodegradation takes place. Usually, activated sludge systems are used for this. As in the biotrickling filter, process control in this can also be achieved by monitoring the water phase and adding nutrients, buffers or fresh water as appropriate. 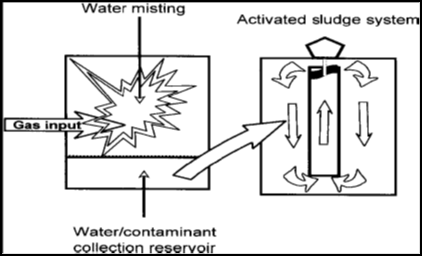 It is a commonly known fact that Delhi is one of the worst hit cities as far as air pollution is concerned. Government is trying its level best to find different strategies to reduce the high intensity of pollutants in air. All fields of science in one way or other wants to be a part in the same. Microbiologists and biotechnologists have found some strategies finally to use microorganisms for biodegrading pollutants present in air. But still work is being done to find similar solutions for water, soil and solid waste management. It is true that environmental biotechnology holds the future for curing the air, water and soil for our next generations.