Of course there are many methods by which genetic manipulation is achieved, e.g. microinjection, electroporation, liposome-mediated transformation, transfer using ES cells(Embryonic Stem Cells) etc. But the most significant one of them is the method of microinjection in which a micromanipulator is employed for the processing. It has a success rate of 1-4% and is mostly used for engineering transgenic mice. The cartoon below shows the process of incorporation of desired genes into a mouse embryo. 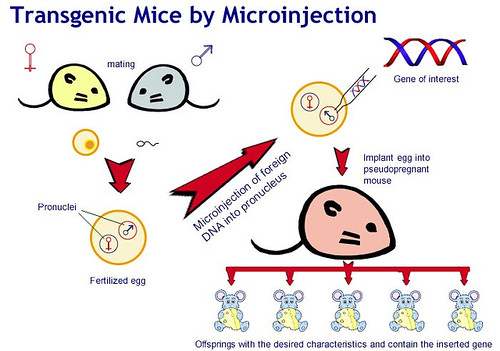 In this widely used process, the embryos are fetched from the female just after the fertilization and prior to birth by using a micromanipulator. The embryos are then immobilized on one side by using a glass pipette and on the opposite site of embryo, desired genes are inserted into the pronucleus of either female or male nucleus. Under careful examination, the embryo is transferred back to the womb of either the biological mother or a surrogate.foster mother which is hormonally prepared. The embryo goes through the rest of the developmental states in a usual manner. The process is shown in terms of a figure below: 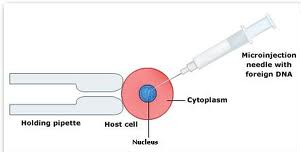 In this simple diagram, the egg is held by pipette while the foreign DNA is being inserted on the other side using a microinjection needle. The new genes are usually inserted into the pronucleus of either of the nuclei.

While carrying out this process, some factors should be kept under consideration that include choosing a selectable/scorable marker gene and a trans-gene. The selectable or scorable marker gene causes co-transformation and the resulting phenotype is expected to get expressed as long as thee host's genome doesn't interferes with it which makes it a dominant phenotype. The DNA microinjection is considered to be the pre-dominantly used method for genetic manipulation of mammalian cells. Mouse was the first ever organism on which this method was tested.

Different microinjection systems can exist, the construction and configuration of which directly depends on the type of experiment. In a zygote-pronuclear microinjection system, the DNA is microinjected into a newly fertilized mammalian egg. The microinjection used for this purpose is very sharp due to which high pressure is required to successfully transfer the DNA into the cells. Apart from this micro-injection system, the embryonic stem cell transfer into blastocyst in which embryonic stem cells are transferred into the cavity of blastocyst. This is usually done when a gene's function has to be reduced or simply, knocked-out. This system requires two micromanipulators, one to hold the cell and the other one to inject the ES cells. Mostly the digital micromanipulators are employed for this purpose since they allow applying positive and negative pressure on the cell which is a crucial requirement for the transfer of ES cells. In intracytoplasmic nuclear injection (ICSI), the sperms are directly injected into the egg cells. This is employed for in-vitro fertilization in animals and has a wide-spread use in dairy and cattle industry. Piezo-assisted ICSI is comparatively a new technique in which sperms are coated with exogenous DNA and then injected into oocytes. This technique employs the use of micro-injection and is used as an assisted technique for assisted conception in animals. Micro-injection is a method also used for adherent cell lines which are cultured in a petridish.

The genetic transformation of genes by using micro-injection has not only been used in mice but also in yeast and C. elegans, successfully. The resulting offspring have been found to have better and improved yields which very much fulfills the purpose of developing GMOs. However, the existing transgenic techniques are still going through stages of development to increase survival rate into the offspring of genetically engineered organisms. Hopefully in future, there will be techniques producing GMOs at their best.