The Indian agriculture is always in thirst of commercializing the modern biotechnological techniques for improving the quality and quantity of crop produce, hence here there is elucidation of how Bt cotton has firm its roots in Indian soil, but Bt brinjal could not and why GM mustard fallen in controversy over its release. ..
India: From BT Cotton to GM Mustard
Author: Omkar Maharudra Limbalkar

The history of Agriculture in India begun from Indus Valley Civilization Era and even before that in some Southern parts of India. Today, India ranks

second position globally in total farm production. Agriculture and allied account for 13.7% of the GDP (gross domestic product). The contribution of agriculture to India's GDP is day-by-day declining with the country's broad-based economic growth. Indian agriculture facing problem i.e. availability of improved varieties with assured yield with less inputs and assured supply of improved varietal seed even in remote areas, there are many more constraints but if India work on these two constraints definitely there will be drastic changes in agriculture production. Developing new varieties is not as simple task as we think because it take 10-12 years of breeder to end up with good variety by traditional way of breeding but there are some biotechnological techniques available and when associated with traditional breeding, definitely we would have assured and good output within short period. Hence to mitigate the increasing food demand, Indian agriculture couldn’t be rely only on conventional way of breeding and have to accept modern techniques in agriculture.

Cotton Bollworm (Helicoverpa armigera) is one of the major biotic stress in cotton crop and every year there was huge loss because of its outbreak on crop, and Indian cotton farming was under biggest threat over this insect attack every year. In 1996, Transgenic cotton was first accepted for field trials in the United States in 1993, and first approved for commercial use in the United States in 1995 and Monsanto Company has taken the paten of Bt cotton. Monsanto in US with joint venture of Mahyco seed in India is responsible for production and dispersal of Bt cotton seed from year 2002 when India accept release of first transgenic crop. Since 2002, there is revolutionary change in production of cotton. Cotton yields more than doubled in the first decade from its introduction, and by 2016, 91% of cotton growing area in India is under Bt cotton.

The main selling points of Bt cotton are the reductions in pesticides use and reduces the ecological damage. If we go into scientific basis of Bt cotton and its way to control pest, it is role of just single gene that has been transfer from bacterium Bacillus thuringiensis i.e.cry1ac (Bollgard I), cry2ab (Bollgard II), or vip3A (Bollgard III), into cotton. Insects belonged to Lepidoptera are sensitive to crystalline endotoxic protein (important protein for insect digestive system) produced by Bt gene which in turn protects cotton from bollworms. The beauty of these gene is they are very specific to certain group of insects hence it is additional advantage to ecological balance. Increase harvests and farm income by reducing crop losses due to pest attacks. As because of natural selection occur in insect, there is development of resistance in lepidopteran against Bt gene in cotton. Hence Monsanto has advances gene construct to combat the problem of insect resistance. But most of NGO’s has raised this issue and opposing the GMO’s but in true sense developing resistance against any gene is natural process and it is occur in every case even in resistant varieties developed by conventional approaches too. India has developed Bt-cotton varieties such as Bikaneri Nerma and hybrids like NHH-44, we should promote the indigenous research also.

On the successful commercialization of Bt cotton in India since 2002, the Bt brinjal has been developed to give resistance against lepidopteron insects, the Brinjal Fruit and Shoot Borer (Leucinodes orbonalis )(FSB). Mahyco, an Indian seed company based in Jalna, Maharashtra, has developed the Bt brinjal. The gene responsible for Cry1Ac protein expressed in Bt-brinjal is the same as that in Bt-cotton, which is being cultivated in India since 2002 and it has not produced any scientifically proven bad effect on humans, animals or environment while has brought significant benefits by way of increased yield and profit to farmers and decreased use of insecticides. Bt-brinjal would also benefit farmers in the same way and will benefit more of the small holders. Unlike chemical insecticides, Bt proteins cannot bio accumulate. In fact, Bt proteins are naturally produced by soil bacterium Bacillus thuringiensis which live in soil. The Bt protein is decomposed as any other proteins in the soil and in human/animal guts hence avoiding soil contamination and human hazard. 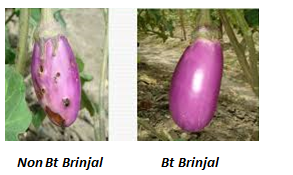 Even though GEAC (Genetic Engineering Approval Committee) had approved the release of Bt-brinjal in India but because of oppose from NGO’s and civil society group raised the issue related to health and biosafety. A major contributor to this growing concern was the fact that GEAC has not at all conformed to the rigorous standards involved in scientific approval of such unique food technologies. So serious are the concerns, that the issue of releasing GM food was a subject of Supreme Court hearing. Besides leading scientists have expressing serious support for its release and many Legislators have opposing the release. As a result, the Indian Environment and Forests Minister Mr. Jairam Ramesh had been forced to refuse the approval for commercial release of Bt brinjal based on the GEAC clearance of 14th October 2009. But in October 30, 2013 Bangladesh Agricultural Research Institute (BARI) received permission from the ministries of Environment and Forests (MoEF) and Agriculture (MoA), to release four varieties of Bt brinjal for the 2013–2014 growing season.

Still most of people think that the transgenic techniques can only use for developing crop resistant to insect pest like cotton or maize and not else but in fact it has wide range of uses. The practical example of this is the GM Mustard variety DMH-11 is developed by Deepak Pental, Professor of Genetics at the University of Delhi and a former vice-chancellor for making mustard amenable for hybridization. It is very important to develop hybrid in crop to get maximum yield per acreage but the mustard is self-pollinated crop and it became very cumbersome and costly to do crossing manually. DMH-1 (Dhara Mustard Hybrid-1), the only hybrid released by the Indian Council of Agricultural Research (ICAR) after extensive field trials. That involves a different technique, called cytoplasmic male sterility (CMS) it’s effective but large-scale seed production isn’t possible and also has problems with stability and cannot be used in many mustard lines.

If we need hybrid seeds with high purity and large quantity, for that a robust pollination control mechanism is needed. So in DMH-11 (Dhara Mustard Hybrid-11) the pollination control mechanism has been used is transgenic male sterility i.e. barnase and barstar system. These genes have been isolated from bacterium Bacillus amyloliquefaciens . As because barnase gene in female parent make plant male sterile and barstar in male parent makes it male fertile. The barnase gene is linked with other gene from bacterium “bar “responsible for herbicide tolerant. The herbicide tolerance in DMH-11 is incorporated only for killing the fertile plants in hybridization plot, so that the pollen from these male fertile individuals of same variety can be avoided. On spraying herbicide (a gene specific herbicide Bastar), only female lines containing barnase gene will survive and there is ease in hybridization with suitable heterotic male plants. 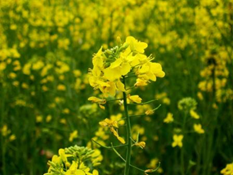 Indian mustard is a winter crop of 135-days life cycle and grown in a completely different ecology. European rapeseed is having good source of variability for yield and quality traits. But if we you grow European rapeseed here, we will get nothing. Rapeseed has a very narrow genetic base but, with the use of variability available in Rapeseed germplasm we can have better yield with heterosis breeding. The heterosis in any crop has been exploited by hybridization between two diverse parents, DMH-11 uses, East-European line called EH2 as male parent and Varuna as the female, but DMH-11 uses transgenic technology. The fundamental insight is that we will get heterosis (or high-yielding hybrids) only if we cross an East European line with an Indian pure (cultivar) line. Indian-Indian crossings won’t have that effect irrespective of what technology we use. DMH-11 generally yields 20%-30% more than its parents. Hybrids are more productive than their pure-line parents. That’s what really matters and that’s all that we claim. Barnase- barstar system is stable and CMS-based systems are a scientific dead-end.

Controversies and the fact with GM mustard:

The major oppose to GM mustard is as because it is food crop and its use of oil in daily cooking but if we see the composition of mustard oil, it doesn’t contain any protein. The barnase and barstar genes don’t express in the seed, only the bar gene does, to some extent but it has no threat. As India was world's biggest importer of palm oil and soyoil in 2015-16, the release of this hybrid might be resolve this crisis. Some social NGOs and activist in India following Europe’s organic agriculture but actually Europe doesn’t need transgenics, because they don’t want to increase their area for cultivation. They don’t want to export food. They don’t have 48% of their population dependent on farming. There is, for instance, no organic cultivation in Germany. Are any of their prescribed herbicidal chemicals any less toxic? They are not worried but India has to be because our yields are stagnating, farm incomes are not rising and India importing ₹65,000 crore worth of edible oil every year. Even Europe has outshines in agrochemicals… Bayer, Syngenta, BASF are the top companies in chemistry and making molecules for pesticides, fungicides. They have selects that track.

As far as the organic farming is concern we can expect quality but quantity can’t, hence to feed the growing population in any developing nation there must be follow up of modern biotechnological technique in agriculture for ensuring the yield. The social activist and few NGO’s have questioned regarding the biosafety issues but experts from different authority have been checked the hazardous effect on human, animal and environment. Hence being science scholar we should appreciate the scientist’s efforts in these areas and should accept the truth rather supporting baseless controversy.