Marker Assisted Selection and its Applications in Vegetable Crops


To improve plant varieties, since the late 19th century plant breeders relied on phenotypic selection of traits such as plant morphological traits, disease resistances, yield and quality traits. Which is solely depends upon selection efficiency of a breeder for desired phenotype and demanding more time too.

Only with the advent of molecular markers in the late 1970s, it became possible to select desirable traits indirectly based on the banding pattern of marker instead of phenotype even at seedling stage which save time and labour cost, is termed as marker assisted selection. Easily detectable DNA markers can now be used in plant breeding. The idea of MAS or Smart Breeding was taken up with great enthusiasm, and several breeders expressed the hope to “skip several breeding cycles and condense timelines” and to finally having found a tool, “to control all allelic variation for all genes of agronomic importance”.

The DNA markers used for marker assisted selection must fulfil certain criteria such as marker must be close linked to gene of interest (<2cM), polymorphic nature of marker to differentiate between genotypes, high reproducibility, simple PCR procedure and cost effective. 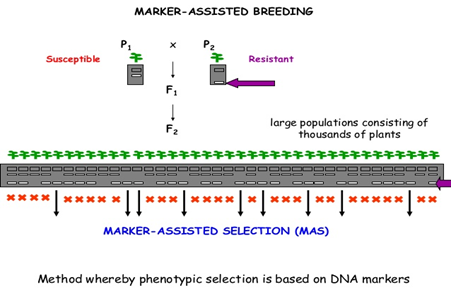