Thermal asymmetric interlaced (TAIL) PCR is a very popular technique to amplify the unknown DNA fragments adjacent to known sequence. It was first reported by Liu and Whittier (1995) in Arabidopsis thaliana.

It requires a set of nested sequence specific primers (TR1, TR2, TR3) along with short arbitrary degenerate (AD) primers (ADn1-ADn6) of 15- or 16-mers of low melting temperature with various level of degeneracy (64 to 256 fold). By alternating the annealing temperature at high (62°C to 68°C) to low (44°C), the relative amplification efficiencies of specific and nonspecific products can be thermally controlled.

How to design sequence specific primers for TAIL-PCR

The T-DNA specific primers have to be designed as close as possible to the right/left border repeat sequence but should not be exactly from the border sequences as T-DNA integration is not precise and always leads to some rearrangement or deletion of the borders. Further, distance between second (TR2) and third (TR3) nested primers should be kept in such a way so that they facilitate the identification of target product by size comparison. Designing of TAIL-PCR primers is illustrated in the Fig. 1.

How to setup TAIL-PCR reaction

How to analyze the TAIL-PCR amplified product

All three nested PCR products of TAIL-PCR are run alongside in agarose gel electrophoresis. Size difference between secondary and tertiary PCR products may give the indication that product is to be insertion speciﬁc (Fig 2). Putative insertion specific bands from secondary reaction are eluted from the gel and should be cloned into the pGEMT-easy vector for sequencing. Cloning in pGEMT-easy vector is recommended because obtaining a single putative insertion specific band in TAIL-PCR takes around 2-3 days and if the sequencing reaction is failed, one can immediately use the cloned sequence for sequencing template preparation without undergoing cumbersome three round of TAIL-PCR, gel electrophoresis and gel elution. 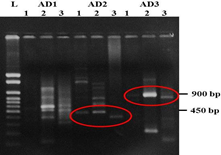 How to analyze the TAIL-PCR sequencing results

Sequence file is first processed to remove any cloning vector sequence and then aligned with the T-DNA sequence from where TAIL-PCR primers have been designed including border and backbone sequences. Several kinds of results will be obtained in this alignment.

After identification of T-DNA sequence in the TAIL-PCR amplified product, remaining sequence is subject to NCBI-BLAST to find out the site of T-DNA insertion. If sequence shows hit with any of the genomic region then it could be considered as putative flanking gene. If we examined the sequence closely, some unique features of T-DNA insertion will appear. This is illustrated with one example. In this sequence, T-DNA sequences are shown in pink and genomic sequence is highlighted with green. At the junction between T-DNA and genomic sequence, 14 bp flanking gene sequences has been duplicated during integration of T-DNA into the genome.

After identification of flanking gene through BLAST analysis, there is need for confirmation of predicted sequence through PCR. This could be done by using primers from the flanking gene and T-DNA primers as illustrated in Fig. 3.

Fig. 3 Designing of primers from the flanking gene for confirmation of T-DNA insertion

If PCR amplified product gives expected size band then it is said to be that identified T-DNA insert location is confirmed.