Virus-Based Vectors and their Application

Virus-based expression vectors are commonplace tools for the production of proteins or the induction of RNA silencing in herbaceous plants. It considers a completely different set of uses for viral vectors in perennial fruit and nut crops, which can be productive for periods of upto 100 years. Value of virus-based vectors is that they add nothing permanently to the environment..
Virus-based vectors and their application
Authors: Pooja Kumari, V. Celia Chalam, D.B Parakh and Ashok Kumar Maurya
ICAR-National Bureau of Plant Genetic Resources, New Delhi.

Recommended DNA technology is a age old practice; it has been revolutionized in plant biological research. Because, in this technology, we can able to study the expression of the foreign gene sequence in the plant or other organisms. It is very important technique in genetic engineering for manipulation of gene function. In the recent era the RNA silencing technique is also allowed for the manipulation of expression of endogenous gene. Besides that, use of transient expression of virus-based vector is also used for the same purpose but confined to woody perennial crops.

In screening a series of genes transformed into plants, each transformation event is different (Donson et al., 1991). Several replicated transformants of each line need to be made and screened, resulting in many plants that must be tested. In contrast, using a vector to screen the series of genes, all of the plants infected by the vector carrying a gene of interest would express the gene equally. Because of the long life span of woody fruit and nut crops, perhaps the greatest value of virus-based vectors would be to treat plants after they became infected or infested. If effective genes are found to relieve a disease, they could be delivered to infected plants by a virus-based vector with the aim of allowing continued production. With annual crops, it is difficult to envision a situation in which this approach would be economically viable, but with perennial crops, this could be the alternative to pushing up the plants and replanting years before the end of their productivity. This technique is a novel idea but still under progress or infant stage.

This concept came from reverse genetics of plant viruses. Reverse transcriptase used as key enzyme to convert RNA virus genome into DNA that allow using DNA specific enzyme to clone and alteration of viral genome. Practiced earlier by Virologist to identify the function of viral gene making mutation (substitution or deletion). Later, they started insertion of reporter gene into viral genome this would allow to improve monitoring of replication and movement in the plant system (by using fluorescent protein marker).

Concurrently, these studies led to realized that extra sequences that are inserted into the plant viruses are also tolerated by the viral genome. So, they tried to insert some other gene of interest that can also be expressed. Earlier the viral vector expressing reporter gene used to elucidate many different aspect of viral biology such as replication, gene function, differential susceptibility, and cell to cell movement, cross protection, temporary expression of gene, localization and insect transmission.

Citrus tristeza virus-based vector: Citrus tristeza virus (CTV) provides one of a few examples of viruses infecting perennial plants that have been explored from a standpoint of vector design. This virus is endemic in most citrus growing regions, having many phenotype associated with different CTV isolate. In USA complete uprooting of citrus plantation and threaten the citrus industries in many parts of world. It causes mild to no symptom. In Florida two major strain have been found i.e, T30 and T36. T30 strain of CTV causes no symptom in commercial host whereas, T36 showing some symptom and killed sour oranges root stock. Although CTV infections are limited to phloem-associated cells, the levels of foreign gene production by the CTV-based vector in infected cells appeared to be similar to that in cells infected with the TMV-based vectors. The most remarkable feature of this vector has been it’s stability. Infact, the originally infected plant is still continually producing green fluorescent protein (GFP) after more than nine years. CTV viral genomic vector are capable of retaining and expressing larger foreign sequences (William et al., 2013). In a successful first-generation CTV add a gene vector, the foreign gene arbitrarily was positioned between the two coat protein (CP) genes (minor coat protein gene and major coat protein gene) at position 6 from the 3’ terminus of the genomic RNA. Recently it has been noticed that CTV effectively expresses high levels of foreign proteins from several other locations within it’s genome. Positioning the foreign gene near the 3’ terminus elevates protein production more than two orders of magnitude. Infact, It has been showed that a CTV-based vector in next generation can simultaneously express three reporter genes in citrus trees. This creates a possibility to design a vector against multiple pathogens or pests. 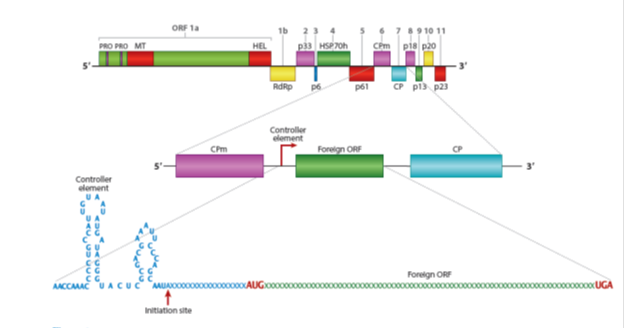 Apple latent spherical virus (ALSV)-based vector: Tree crops have a long juvenile period which is a serious constraint for genetic improvement and experimental research. For example, apple remains in a juvenile phase for more than five years after seed germination. Several agrotechnical approaches have been developed to promote flowering in apple seedlings. Grafting of seedlings onto dwarfing root stocks or top grafting to bearing trees can stimulate earlier flowering. However, it is difficult to reduce the juvenile phase of apple seedlings to 2 years by such methods. Recombinant ALSV based vector approach is involved in floral development of apple in it’s seedling stage perse.

ALSV-based vector was constructed from the infectious cDNA clone of RNA by duplication of protease cleavage site between the C-terminus of movement protein (MP) and the N terminus of Vp25 (capsid protein) (Yamagishi N et al. 2011). It is used for expression of foreign genes and silencing of endogenious genes in plants. Noticed about induction of rapid flowering in apple seedlings using theApple latent spherical virus (ALSV) vector expressing a FLOWERING LOCUS T (FT) gene from Arabidopsis thaliana. Apple seedlings could be flowered at 1.5-2 months after inoculation to cotyledons of seeds just after germination with ALSV expressing the FT gene. A half of precocious flowers were normal in appearance with sepals, petals, stamens and pistils. Pollen from a precocious flower successfully pollinated flowers of ‘Fuji’ apple from which fruits developed normally and next generation seeds were produced. Our system using the ALSV vector promoted flowering time of apple seedlings within two months after germination and shortened the generation time from seed germination to next-generation seed maturation to within 7 months when pollen from precocious flowers was used for pollination.

In the recent year virus based vector began to produce commercial product such as high value protein in pharmaceutical industries, production of vaccine, antigen and antibody for disease control and diagnosis, treatment for human patient against certain diseases. In the future, a vector should be thought of not as a virus but as a device designed to solve a specific problems. Vector should be built not just from viruses of plants but from all available biological components.

Donson J, Kearney CM, Hilf ME, Dawson WO. 1991. Systemic expression of a bacterial gene by a