DNA , abbreviation of deoxyribonucleic acid, organic chemical of complex molecular structure that is found in all prokaryotic and eukaryotic cells and in many viruses. DNA codes genetic information for the transmission of inherited traits. 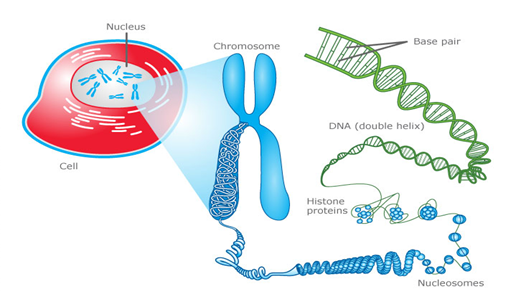 Deoxyribonucleic acid or DNA is a molecule that contains the instructions an organism needs to develop, live and reproduce. These instructions are found inside every cell, and are passed down from parents to their children. All living things have DNA. And whether it comes from you, a pea plant, or your pet rat, it's all the same molecule. It's the order of the letters in the code that makes each organism different.

Frederick Griffith
Frederick Griffith, a scientist, was working on a project in 1928 that formed the basis that DNA was the molecule of inheritance. Griffith's experiment involved mice and two types of pneumonia – one was virulent and the other non-virulent. He injected the virulent pneumonia into a mouse and the mouse died. Next he injected the non-virulent pneumonia into a mouse and the mouse survived.

Oswald Avery
Oswald Avery continued with Griffith’s experiment around a decade later to see what the inheritance molecule was. In this experiment he destroyed the lipids, ribonucleic acids, carbohydrates, and proteins of the virulent pneumonia. Transformation still occurred after this. Next he destroyed the deoxyribonucleic acid. Transformation did not occur. He had found the basis of the inheritance.

He showed that the components of DNA were linked in the order phosphate-sugar-base. He said that each of these units is a nucleotide and suggested the DNA molecule consisted of a string of nucleotide units linked together through the phosphate groups. He suggested that these form a 'backbone' of the molecule. However, Levene thought the chain was short and that the bases repeated in the same fixed order. It was Torbjorn Caspersson and Einar Hammersten who showed that DNA was a polymer.

Rosalind Franklin and Maurice Wilkins Thereafter two researchers Rosalind Franklin and Maurice Wilkins tried to make a crystal of the DNA molecule. They wanted to take X ray pictures of the DNA to understand how DNA works. These two scientists were successful and obtained an x-ray pattern. The pattern appeared to contain rungs, like those on a ladder between to strands that are side by side. They found that DNA had a helix shape.

Watson and Crick In 1953, two scientists, James Watson and Francis Crick, were trying to put together a model of DNA. They took a look at Franklin and Wilkin's picture of the X-ray and made their model. They created a model that has not been changed much since then. Their model showed a double helix with little rungs connecting the two strands. These rungs were the bases of a nucleotide. They also found that if they paired Thymine with Adenine and Guanine with Cytosine DNA would look uniform. This pairing was also in accordance with Chargaff's rule.

DNA, or deoxyribonucleic acid, is the hereditary material in humans and almost all other organisms. Nearly every cell in a person’s body has the same DNA. Most DNA is located in the cell nucleus (where it is called nuclear DNA), but a small amount of DNA can also be found in the mitochondria (where it is called mitochondrial DNA or mtDNA).

The information in DNA is stored as a code made up of four chemical bases: adenine (A), guanine (G), cytosine (C), and thymine (T). The order, or sequence, of these bases determines the information available for building and maintaining an organism, similar to the way in which letters of the alphabet appear in a certain order to form words and sentences.

DNA bases pair up with each other, A with T and C with G, to form units called base pairs. Each base is also attached to a sugar molecule and a phosphate molecule. Together, a base, sugar, and phosphate are called a nucleotide. Nucleotides are arranged in two long strands that form a spiral called a double helix. The structure of the double helix is somewhat like a ladder, with the base pairs forming the ladder’s rungs and the sugar and phosphate molecules forming the vertical sidepieces of the ladder.

An important property of DNA is that it can replicate, or make copies of itself. Each strand of DNA in the double helix can serve as a pattern for duplicating the sequence of bases. This is critical when cells divide because each new cell needs to have an exact copy of the DNA present in the old cell. 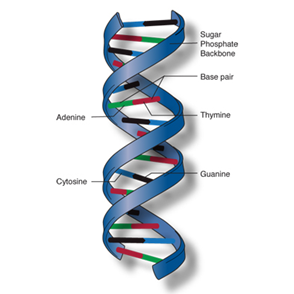 Double helix is the description of the structure of a DNA molecule. A DNA molecule consists of two strands that wind around each other like a twisted ladder. Each strand has a backbone made of alternating groups of sugar (deoxyribose) and phosphate groups. Attached to each sugar is one of four bases: adenine (A), cytosine (C), guanine (G), or thymine (T). The two strands are held together by bonds between the bases, adenine forming a base pair with thymine, and cytosine forming a base pair with guanine.

A gene is the basic physical and functional unit of heredity. Genes, which are made up of DNA, act as instructions to make molecules called proteins.

DNA replication , or the copying of a cell's DNA, is no simple task! There are about 6.56.56, point, 5 \text{billion}billionb, i, l, l, i, o, n base pairs of DNA in your genome, all of which must be accurately copied when any one of your trillions of cells divides^1​1​​start superscript, 1, end superscript.The basic mechanisms of DNA replication are similar across organisms. In this article, we'll focus on DNA replication as it takes place in the bacterium E. coli, but the mechanisms of replication are similar in humans and other eukaryotes. Let's take a look at the proteins and enzymes that carry out replication, seeing how they work together to ensure accurate and complete replication of DNA.

DNA replication is semiconservative, meaning that each strand in the DNA double helix acts as a template for the synthesis of a new, complementary strand. This process takes us from one starting molecule to two "daughter" molecules, with each newly formed double helix containing one new and one old strand.

One of the key molecules in DNA replication is the enzyme DNA polymerase. DNA polymerases are responsible for synthesizing DNA: they add nucleotides one by one to the growing DNA chain, incorporating only those that are complementary to the template.

How do DNA polymerases and other replication factors know where to begin? Replication always starts at specific locations on the DNA, which are called origins of replication and are recognized by their sequence. E. coli, like most bacteria, has a single origin of replication on its chromosome. The origin is about 245245245 base pairs long and has mostly A/T base pairs (which are held together by fewer hydrogen bonds than G/C base pairs), making the DNA strands easier to separate. Specialized proteins recognize the origin, bind to this site, and open up the DNA. As the DNA opens, two Y-shaped structures called replication forksare formed, together making up what's called a replication bubble. The replication forks will move in opposite directions as replication proceeds.

DNA polymerases can only add nucleotides to the 3' end of an existing DNA strand. (They use the free -OH group found at the 3' end as a "hook," adding a nucleotide to this group in the polymerization reaction.) How, then, does DNA polymerase add the first nucleotide at a new replication fork?Alone, it can't! The problem is solved with the help of an enzyme called primase. Primase makes an RNA primer, or short stretch of nucleic acid complementary to the template, that provides a 3' end for DNA polymerase to work on. A typical primer is about five to ten nucleotides long. The primer primes DNA synthesis, i.e., gets it started. Once the RNA primer is in place, DNA polymerase "extends" it, adding nucleotides one by one to make a new DNA strand that's complementary to the template strand.

In E. coli, the DNA polymerase that handles most of the synthesis is DNA polymerase III. There are two molecules of DNA polymerase III at a replication fork, each of them hard at work on one of the two new DNA strands. DNA polymerases can only make DNA in the 5' to 3' direction, and this poses a problem during replication. A DNA double helix is always anti-parallel; in other words, one strand runs in the 5' to 3' direction, while the other runs in the 3' to 5' direction. This makes it necessary for the two new strands, which are also antiparallel to their templates, to be made in slightly different ways. One new strand, which runs 5' to 3' towards the replication fork, is the easy one. This strand is made continuously, because the DNA polymerase is moving in the same direction as the replication fork. This continuously synthesized strand is called the leading strand. The other new strand, which runs 5' to 3' away from the fork, is tricker. This strand is made in fragments because, as the fork moves forward, the DNA polymerase (which is moving away from the fork) must come off and reattach on the newly exposed DNA. This tricky strand, which is made in fragments, is called the lagging strand.

The maintenance and cleanup crew

Some other proteins and enzymes, in addition the main ones above, are needed to keep DNA replication running smoothly. One is a protein called the sliding clamp, which holds DNA polymerase III molecules in place as they synthesize DNA.