DNA: The Messenger of Life

Fertilization results in fusion of two sets of hereditary information to create new organism. DNA is master molecule responsible for passage of phenotypic traits from generation to generation. DNA in chromosomes is divided into functional subunits called genes. Genes play vital role in heredity, mutation, variation and evolutionary development of species. The structural and functional unit of chromosomes is called genes. Gregor Mendal suggested that phenotypic traits result from interactions between factors we call them as genes.DNA helix of chromosomes composed of thousands of genes. Every gene is blue print for a particular polypeptide product.

Biosynthesis of RNA is the process of synthesizing three types of RNA mRNA,rRNA,and tRNA, where hereditary information contained in a gene is transferred onto newly synthesized strand of RNA called mRNA. Ribosomal RNA is as structural part of the ribosome. tRNA act as adopter molecule which carries amino acid to the site of protein synthesis.

The transcriptions of DNA into RNA take place in four basic steps.

Initiation : involves the unwinding of the DNA double helix in the region where the DNA sequence to be transcribed known as gene. Free ribonucleotides form the bond to the exposed complementary bases on coding strand of the DNA for pairing.

Elongation : involves the bonding of correctly ordered ribonucleotides to one another in the growing RNA molecule as soon as the first two RNA nucleotides are correctly positioned, the enzyme RNA polymerase joins the sugar of nucleotide of the phosphate of the next, eventually creating the sugar /phosphate bond back bone of the RNA molecule.

Termination: involves the separation of the completed RNA molecule from the DNA template and the re-bonding of the two complementary DNA strands.

RNA is often processed and modified after transcription. This processing involves addition of a 3’poly A tail and a 5’methyl cap structure. Nascent transcript of mRNA has both coding and noncoding sequences. Noncoding sequences called introns are spliced out of RNA molecule leaving behind coding exons called mature transcript for translation.

Genetic code . It is the language of RNA translated by tRNA into aminoacid.tRNA molecule specifies amino acid by unique sequence of three ribonucleotide bases called an anticodon recognizes complementary codon in the mRNA. Many amino acids are specified by more than one codon. Codon is specified by open reading frame.Twenty different aminoacyl tRNA synthetase specify single amino acid.

Translation is the final step in the process of gene expression. It is the synthesis of long poly peptide chain in ribosome as directed by mRNA. Protein synthesis it is co-ordinate action of rRNA, tRNA, mRNA and various enzymes take place in cytoplasm.

Initiation: involves the correct placement of the mRNA molecule on the ribosome.

Elongation: is the attachment of amino acids whose placement is dedicated by the complementary of the codon and anticoden sequences to one another to form a growing polypeptide chain form the ribosome form the ribosome complex.

Termination: involves the detachment of completed polypeptide chain from ribosome complex when stop codon is reached.

DNA is amazing molecule responsible for growth of life. It is the source of great number of developments. It has role in transfer of genetic message to all cells in the body. DNA is the most significant discoveries of the twentieth century. Today synthetic biology is the nascent field to create new DNA or entire life forms.DNA is indeed a molecule and messenger of life. 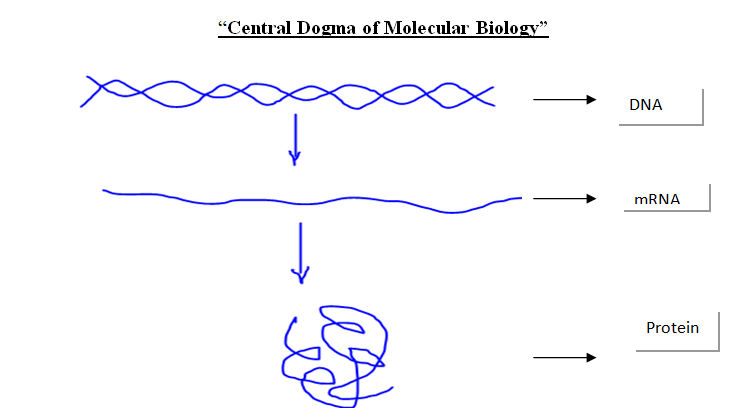