Acid mine drainage is a serious matter of concern to the environment as it contains toxic substances which creates problem to the ecosystems and living beings. It can be controlled by preventing the flow of water to the mining sites..
Acid Mine Drainage: Sources, Impacts and Prevention

Acid drainage problem is associated with the mining of certain minerals that cause long term harm to waterways and biodiversity. Effluents from these mining industries usually contain high quantities of toxic substances such as cyanides and heavy metals which have harmful effects on ecology and the health of living beings. Acid mine drainage (AMD) is acidic water having pH of less than 5, and also containing iron, sulfate and other metals which are formed under natural conditions when hardrock mines containing pyrite are exposed to the atmosphere or oxidizing environments. In other words, AMD can also be stated as outflow of the acidic water from mining sites. Naturally occurring microbes can also increase AMD production by increasing the breakdown of sulfide minerals.

Apart from low pH, the effluents of AMD also have high specific conductivity, high concentration of aluminum and manganese. As the treatment of AMD is expensive and inadequate, it is often left untreated. Pyrite is one of the most important sulfides found in the waste rock of mines. When exposed to water and oxygen, it can react to form sulfuric acid (H2SO4). The following oxidation and reduction reactions express the breakdown of pyrite that leads to AMD. Introduction of hydrogen ions can affect the acidity of a stream. When evaluating the extent of AMD, it is important to know the amount of hydrogen ions remaining in solution after the natural buffering of the stream is completed. AMD depletes the buffering ability of water by neutralizing carbonate and bicarbonate ions to form carbonic acid. Once exposed to AMD, the affected carbonate buffering system is not able to control changes in pH. The buffering system is completely destroyed below a pH of 4.2, where all carbonate and bicarbonate ions are converted to carbonic acid. The carbonic acid readily breaks down into water and carbon dioxide.

Bright orange-colored water and stained rocks are usually tell-tale signs of acid mine drainage. The orange color is caused by ferric hydroxide [Fe(OH)3] precipitating out of the water. The precipitate forms as the AMD becomes neutralized. The metal ions remain soluble at low pH. As the pH rises, the iron oxidizes and precipitates out. Depending on the conditions, the orange-colored precipitates may form inside the mine or several miles downstream.

Sources and factors determining the rate of acid generation

There are mainly two sources of AMD. They are: Primary sources and Secondary sources.

Other factors include waste rock dump permeability. Dumps with high permeability have high oxygen access, which contributes to the higher chemical reaction rate.

The major effects of AMD are seen with respect to the aquatic resources. Not much direct impact is seen on humans as long as they are not consuming the water resources affected by deposits of AMD. Many river systems and former mine sites are totally inhospitable to aquatic life with the exception of "extremophile" bacteria. Additionally, heightened acidity reduces the ability of streams to buffer against further chemical changes. The clumps reduce the amount of light that can penetrate the water, affecting photosynthesis and visibility for animal life. Furthermore, when the precipitate settles, it blankets the stream bed, smothering the bottom-dwellers and their food resources. 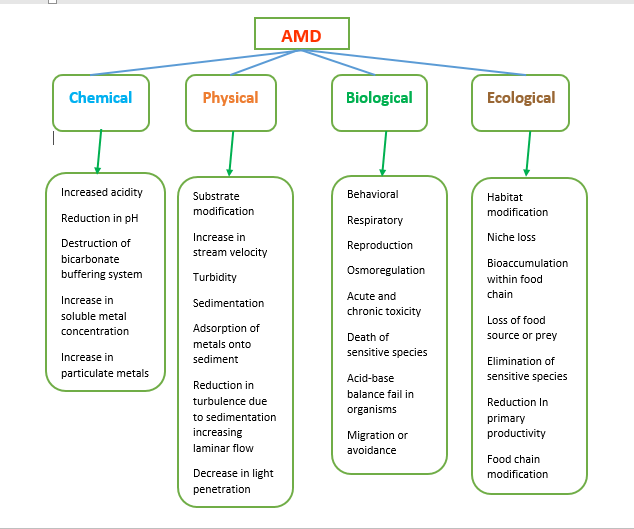 The major ecological source that could be harmed through AMD is water. Hence, it is important to control the flow of water to mining sites. This could be done by the following measures:

a. Diversion of surface water flowing towards the site of pollution
b. Prevention of groundwater infiltration into the pollution site
c. Prevention of hydrological water seepage into the affected areas
d. Controlled placement of acid-generating waste

Fig. 2: Strategies for Prevention of Acid Mine Drainage
The alternate ways to mitigate AMD include: prevent sulfuric acid and other acids formation, collect runoff/seepage to contain the acid.