It was a common perception that, bacterial cells are primarily selfish individuals, but, in recent past, it has become clear that, they behave like well organized social organisms like us. Such cell to cell networking is called Quorum Sensing. For such communication they employ low molecular weight, diffusible signals and upon achieving a certain concentration (quorum concentra..
Cell to cell communication and social networking in Plant pathogenic bacteria
Author: Namita Das Saha
Centre for Environment Science and Climate Resilient Agriculture (CESCRA)
Indian Agricultural Research Institute (IARI), Pusa, New Delhi-110012, India

Human being are the most intelligent creature on this earth, employ social networking and communication in a well-organized way. Although it was a common perception that microbes behave like a solitary organism but, in last two decades it has become clear that single-celled microbes can even communicatewith each other and respond as well behave collectively to achanging environment. They behave like a well-organized social organism in a cooperative manner. Such a cell-to-cell communication mechanismis known as quorum sensing (QS) and in manycases, plays essential roles in synchronizing certain set of gene expressionand thus functional coordination among bacterial communities. This is like chit-chat between organisms of same species and as well other species. The bacteria release, detect and respond to accumulation of signal molecules in a cell density-dependent manner,thereby regulating the expression of a set of targetgenes. For several purposes, they communicate in such a way viz., biofilm formation, conjugation, motility, sporulation, pathogenesis, antibiosis etc.

In general two types of signal molecules are there. Short chain peptides are specific type of signal molecule for QS in case of gram positive bacteria (Figure. 1) and acyl homoserine lactone (fatty acids derivatives) in case of gram negative bacteria. However, several derivatives of these two basic types of bacterial cell-to-cell communicationsignals have been identified in the last two decades, such as N-acylhomoserine lactone (N-AHL), cyclic thiolactone(AIP), hydroxyl-palmitic acid methyl ester (PAME), furanosylborate (AI- 2) and methyl dodecenoic acid (DSF), most of which are involved in theregulation of bacterial virulence.In case of gram negative bacteria, all types of signal molecules possess a resemblance in structure among themselves. There is similarity in the lactone homoserine moiety and only difference is in the side chain length and different functional groups substituted to the side chains (Table. 1). The QS phenomenonis not only limited to the prokaryotic kingdom;single-celled eukaryotic fungal pathogens can also use QSsignals to coordinate biological functions. It has recentlybeen reported that the fungal pathogen Candida albicansproduces farnesoic acid (FA) to regulate the yeast-tomyceliumtransition that is important for the fungal virulence. 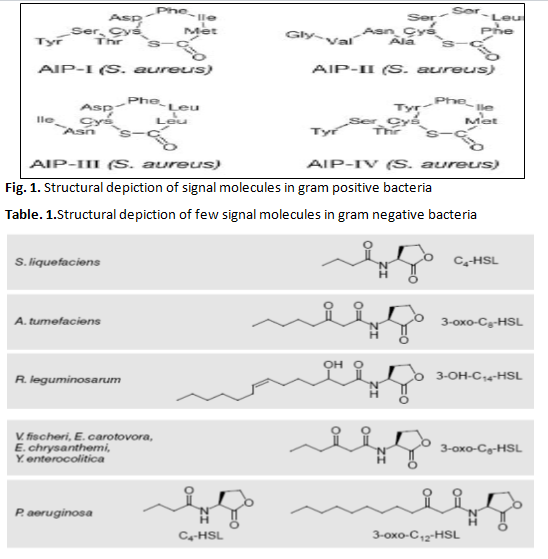 The concept of quorumsensing (QS)was first elucidated inthe luminescent marine bacterium Vibrio fischeri.It wasdiscovered that these organisms express genes controllinglight emission only when associatedwith their fish or squid symbiotic hosts. When freeliving in the ocean (i.e. at low cell density), luciferase is notexpressed. When grown in culture in the laboratory, luciferaseexpression was rapidly induced in a coordinatedmanner at the late log phase of cell growth. Attempts touncover the mechanism of this gene regulation involved experiments in which conditioned, cell-free culture mediafrom bacteria growing at high cell density was added to alow-density culture (Nealson, 1970).Cells growing at low densityexpressed luciferase in the presence of the conditionedmedia.Thus itwas discovered that a factor secreted by cellsaccumulates as cell density increases, and this factorinduces expression of the luciferase-encoding genes. Thiswas the first demonstration of QS, or cell population density dependent control of gene expression.

Although initially discovered in marine symbionts, QS systems are also employed by pathogenic bacteria to altergene expression coordinately in response to associationwith a eukaryotic host organism. Many human pathogens, including Pseudomonas aeruginosa, Burkholderiacepacia, Salmonella typhimurium and Yersinia enterocolitica, regulateexpression of virulence factors required for pathogenicityvia QS. P. aeruginosa is one of the most studied QSorganisms because of its role as an emerging opportunistichuman pathogen.

In case of Vibrio fischeriLuxI/LuxR quorum sensing regulon system regulates the bioluminescence. There are six luciferase structural genes ( luxCDABEG) and two regulatory genes luxIand luxRrequired for quorum sensing control light emission in Vibrio fischeri. The genes are arranged but divergently transcribed units. The LuxI protein is responsible for synthesis HSL auto inducer. At low population density, luxI and luxR are transcribed at a low level and there is insufficient accumulation of quoromone signal to elicit the LuxR dependent transcription of lux operon for visible luminescence. As the cell population density increases, concentration of autoinducer also increases both in intra and extracellularly. At a critical autonducer concentration the LuxR protein bind to autoinducer and this complex binds to the lux promoter to activate the transcription of operon and ultimately there is exponential increase in the light production via increase in the transcription from lux operon (Fig. 2). 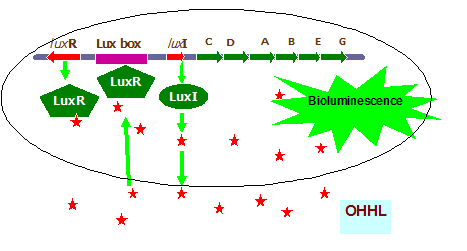 Different purposes for which Quorum sensing is employed by bacteria:

The first quorum quenching enzyme (AHL lactonase) encoded bythe aiiAgene was identified from a soil bacterial isolatebelonging to a Gram-positive Bacillus species-2401B, which was later characterized as an AHL-lactonase(Dong et al., 2001). 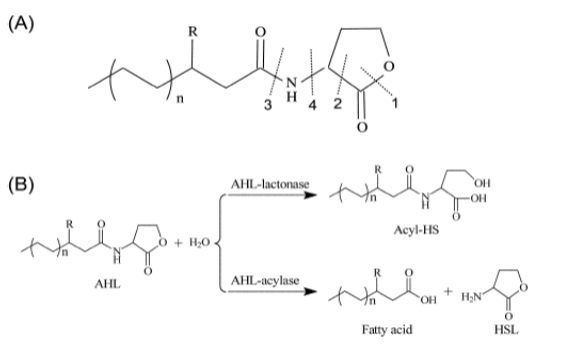 Fig. 3. The general structure of AHL signals and enzymatic degradation products. (A) The AHL structure and its possible enzyme cleavagesites; (B) the correspondingdegradation mechanisms of AHL-lactonase and AHL-acylase. The enzymes in 1 and 3 positions only yet identified and the structural study depicts that in 2 and 4 position there is chances of action of other two enzymes which are yet to be characterized.

Although the study of quorum sensing is only at its beginning, we are now in a position to gain fundamental insight into how bacteria build community networks. This system can be exploited for better management of diseases spread by different pathogenic bacteria.