Phytoremediation: Super-plants Technology to Clean up the Environment

Toxic heavy metals have led to the contamination of environment and are harmful to the human health. Phytoremediation is the use of green plants and their associated microorganisms, soil amendments and agronomic practices to remove, contain or render harmless environmental contaminants...
Toxic pollutants have led to the contamination of environment and become a serious issue worldwide, which directly affect crop yield, and soil fertility. The various toxic heavy metals from mines or factories and industrial waste have been accumulated in inappropriate places and these are harmful to the human health and environment. Therefore, cleaning them is one of the most challenging works. So, there is need to use an alternative approach to overcome the impacts of toxic chemicals on various sources. In this context, green plants can be used as an alternative strategy to clean contaminated sites. Many plants, called hyperaccumulators, accumulate metal contaminants in considerable quantities. This use of plants to clean up contaminated areas is called phytoremediation.

Phytoremediation is the use of green plants and their associated microorganisms, soil amendments and agronomic practices to remove, contain or render harmless environmental contaminants. The term phytoremediationis a Latin word combined with plant and remedy.

Depending upon the type of contaminant, phytoremediation process is broadly categorized as:

1. Phytodegradation: is also called as phyto-transformation in which contaminants can be degraded through compounds (eg. Enzymes) produced by the plants. Eg. Carrots are used to absorb DDT (dichloro-diphenyl-trichloroethylene).

2. Rizodegradation: Also called as plant-assisted bioremediation orphyto-stimulation. In this contaminants are broken down in the rhizosphere (soil surrounding the roots of plants) through microbial activity. Comparatively, this process is slower than phytodegradation.

3. Phytovolatilisation: Plants remove inorganic contaminants by volatilisation or by metal accumulation. This process is ueful for the removal of mercury. A bacterial mercuric ion reductase has been transferred to A. thaliana. This transgenic plant absorbs mercury and reduces it to volatile Hg.

4. Phytostabilization: This process is used to clean up several contaminated sites. In this, plants are chosen for their tolerance to site conditions, and the contaminants become sequestered in cell wall lignins of root tissue.

5. Phytoextraction: Also called as phyto-accumulation, refers to uptake of metals from soil by plant roots into above ground portion of plants. Metals viz., nickel, zinc, and copper are the best candidates for removal by phytoextraction because more than 400 known plants that absorb unusually large amounts of these metals only. 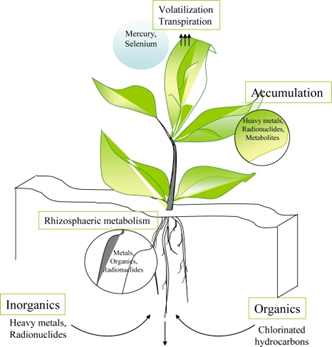 Several attempts are being made to construct transgenic plants that show increasing tolerance to heavy metals and thus these plants can be suitable for phytoremediation. The majority of these novels plants have been tested only under laboratory conditions and very few have been grown in the field (Gratao et al., 2005).

1. Phtoremediationis cheap and cost effective technology
2. Presence of plants on sites makes them more attractive as compare to other methods
Image Source: http:// img=3274165_sensors-09-05040f1&req=4
3. Presence and condition of plant is easily monitored

But, there are certain limitations such as â€" The site must be sufficiently large for easy plant cultivation, most of plants are pollutant specific, less availability of universal plant type and disposal problems after remediation.

Thus the approach is being refined and further research should be focused more on transgenic plants which have been considerably shown increased tolerance to toxic heavy metals. Ultimately this genetic engineering would greatly facilitate large scale practical applications of the technology.