Cisgenesis and its Application in Crop Improvement

Cisgenesis refers to genetic modification of crops/plants using one of the techniques of recombinant DNA technology, without involvement of any foreign DNA...
CISGENESIS AND ITS APPLICATION IN CROP IMPROVEMENT
Authors: Vivek K Singh, Kumatkar Raghunath Bhimrao and Pratik I Bhoyar.
CCS Haryana Agricultural University, Hisar, Haryana, 125004.

One of the major concerns of the general public about transgenic crops relates to the mixing of genetic materials between species that cannot hybridize by natural means. To meet this concern, the two transformation concepts cisgenesis and intragenesis were developed as alternatives to transgenesis.

Concept of cisgenesis introduced by Dutch researchers Schouten, Krens and Jacobsen (2006). It refers to genetic modification of crops/plants using one of the techniques of recombinant DNA technology, without involvement of any “foreign” DNA; in other words, the manipulation is done using donor DNA fragment from the species itself or from a cross compatible species. The newly introduced gene is unchanged and includes its own introns and regulatory sequences and is free of vector DNA, except T- DNA border sequences that flank the cisgene (natural gene). Therefore, it is not really a new technique. The use of the term is an attempt to distinguish GM plants that contain DNA from unrelated organisms. Intragenesis is very much similar to cisgenesis but the difference lies in the fact that the gene of interest is taken from other source while the regulatory elements and introns from another source and a new combination of DNA fragments are created artificially through in vitro rearrangement. Intragenesis also allows the use of antisense or RNA interference (RNAi) with the aim of silencing the gene (Lusser et al., 2011; Schaart and Visser, 2009). 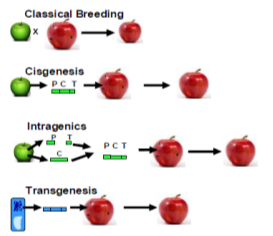 Cisgenic plants are probably considered safer than those produced through conventionally breeded plants because of the lack of linkage drag. In cisgenesis, only the desired genes are introduced without the undesirable genes. Cisgenesis furnishes no unnecessary hazard compared to induced translocation or mutation breeding. Therefore, cisgenesis precludes linkage drag, and hence, prevents hazards from unidentified hitch hiking genes (Schouten and Jacobsen 2008). Due to this reason, cisgenesis is normally safe than traditional breeding programmes and various biotic and abiotic stress resistance genes can be pyramided to provide wider and long lasting forms of resistance.

ADVANTAGES OF CISGENESIS OVER CONVENTIONAL BREEDING:

Maintains original genetic make-up of plant variety: In a hybridization method, the genetic makeup of the progeny plant varies from its parents because it has been a mixture of both the parental genomes, whereas in cisgenesis, a new gene has been introduced without changing their genetic makeup.

Time saving: Cisgenesis could be employed for the rapid introduction of desired traits into commercially successful cultivars without changing their constructive characteristics.

Ø Although cisgenics technology is exhibiting considerable advantages over the transgenic counterpart, but still there are a few limitations associated with this technology like; Characters outside the sexually compatible gene pool cannot be introduced.

Ø Sequence information of the plant.

Ø The production of marker free plants usually requires the development of innovative protocols, since such protocols may not be readily available for the crop.

On 16 February 2012, European Food Safety Authority (EFSA, 2012) reported the detail study concerning the safety aspects of cisgenic plants and validated that cisgenic plants are secure to be used in terms of environment, food and feed, similar to the traditionally bred plants. However, the present GMO regulation keeps the cisgenic micro-organisms out from its supervision.

The first scientific statement of bringing forth a true plant obtained by cisgenic approach was reported in apple through the insertion of the internal scab resistance gene HcrVf2 influenced by their own regulatory genes into the cultivar Gala, a scab susceptible cultivar (Vanblaere et al., 2011). Barley with improved phytase activity was produced successfully by Holme et al. 2011, through cisgenic approach. Late blight resistant potatoes have developed by cisgene stacking of R- gene (jo et al., 2014).

About Author / Additional Info:
I am currently pursuing Ph.D. from CCS HAU, Hisar