Cisgenics and its Application in Crop Improvement

An abominable and unprecedented rise in population with a drastic reduction in the cultivable land area has led the humanity to an unprovoked threat of food security. Also global warming along with other biotic and abiotic stress factors has restrained the conventional breeders to obtain the potential maximum yield that can be harnessed from a crop variety. Thus to evade from such a kind of technological limitation, molecular breeders have taken the help of biotechnological tools. Among them, transgenic crop development is the one that has played a very crucial role.

The area under transgenic or genetically modified (GM) crops has been increased at a faster rate and the area being 160 million hectares. But one of the major concerns of the public about transgenic crops is the use of unrelated or distantly related combinations of genetic elements which are derived from different organisms that are not crossable by natural means. The full potential of GM crops can be realized only with an increased acceptance by the general public. Moreover, the costly, hectic and lengthy procedures for obtaining approval of these crops, the threat for potential health risks and the spread of new genes into other unrelated crops are the major drawbacks in the path of implementing these techniques. Keeping in view of the above drawbacks and to ensure an eco-friendly crop improvement technique, cisgenic and intragenic approaches were developed as alternatives to transgenesis. In both the cases, a DNA fragment from the species itself or from a cross compatible species is inserted into the plant genome. In cisgenesis, the inserted gene is unchanged having its own introns and regulatory elements whereas, in intragenesis, an artificially synthesized novel combination of DNA fragments is inserted along with the gene from the given species or from a cross.

Cisgenesis is the genetic modification of a recipient plant with a natural gene from a crossable sexually compatible plant.

Cisgenesis is the production of genetically modified crops using a donor DNA fragment from the species itself or from a cross compatible species. The newly introduced gene is unchanged and includes its own introns and regulatory sequences and is free of any vector DNA, except T- DNA border sequences that flank the cisgene. The resultant phenotype of the cisgenic plant can be achieved through conventional breeding also; but it will take a much longer time. One of the most important points of cisgenesis is that it introduces only the desired gene, thus avoiding linkage drag that can be resulted from conventional cross breeding and also it eliminates hectic and time consuming backcrossing to recover the recurrent parent genotype. The concept of cisgenesis was introduced by Dutch researchers; Schouten, Krens and Jacobsen in the year 2006. 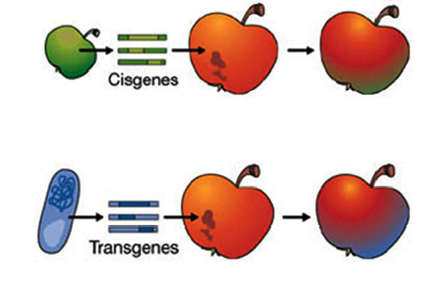 The worthiness of the GM techniques for developing highly reliable and good quality food products to the world has been set off by public worries about the safety of the derived food and there subsequent finished products. Most particularly, the controversy has spotlighted on the probable unpredictable hazards arising from the agglomeration of certain new substances in crop plants that confers toxicity, allergy and genetic threats to humans.

• Cisgenesis is as safe as conventional breeding.
• To overcome the problem of linkage drag.
• Original genetic makeup of a crop is preserved any one or few genes are added.
• Escape of foreign genes via pollen grains to natural vegetation is not a problem in cisgenesis.
• In cisgenesis, only the desired genes are introduced without the undesirable genes unlike conventional breeding.

• The gene outside the sexually compatible gene pool cannot be introduced.
• There is also a chance that the introduction of cisgene may influence the expression of genes that are already present in the recipient genome.
• Position effect may lead to alteration of the gene expression and phenotypic differences.
• The production of marker-free plants often requires the implementation or development of new techniques and such techniques may not be readily available.

Different views regarding the safety issues of cisgenesis have been given. According to Haverkort et al., 2008, cisgenesis may be safer than conventional breeding since the introduction of unwanted traits via linkage drag can be prevented. However, the issue of any endogenous gene silencing needs to be considered. Contrary to the above view, Russell and Sparrow, 2008 argued that similar safety issues as transgenic organisms should be concerned for cisgenic organisms since they may contain new proteins or greatly altered levels of familiar proteins. When Agrobacterium mediated transformation is used for inserting the cisgene, fragments of the right border (RB) and the left border (LB) will be integrated along with the cisgene in the plant genome and since these short sequences are non-coding, they are unlikely to have a phenotypic effect. But in case the RB and the LB sequence become a part of an open reading frame belonging to a recipient gene, they can be translated into protein and a fusion protein can be formed. Such situation is undesirable and screening should be done by investigating the nature of the recipient genomic sequence that is flanking the T-DNA insert.


Advantages of Cisgenesis Over Conventional Breeding

1. Removes linkage drag: Introgression of new traits into the cultivated varieties by conventional methods comprises of wide crosses and repeated backcrossing. However, these traits are constantly linked with a large share of unwanted chromosomal region, the so called linkage drag. Some of these genes affect the normal features of the crop as they may engage in the production of diverse kinds of toxins or allergens. Hence, direct transfer of desired genes through cisgenesis into an existing variety without altering any of the properties enviable for the consumers can be accomplished.

2. Maintains the original genetic make-up of the plant varieties: In a hybridization method, the genetic makeup of the progeny plant varies from its parents because it has been a mixture of both the parental genomes. In spite of this, there is a necessity to conserve some part of the genome which reveals certain constructive traits. Through conventional plant breeding such an approach is not possible entirely due to self incompatibility among the vegetatively propagated plants. Cisgenic breeding tools are used in order to get up to four different resistance genes into one variety without changing the other traits of the modified variety.

3. Reduction in pesticide application: The key purpose of cisgenesis is to transfer disease resistance genes to susceptible varieties. The vital goal here is to lessen substantial pesticide application. As a result, there is decline in the input costs of the farmers and decreased pesticide leftovers on the plants and also in their products, which is mostly favoured by the consumers. This reduces the environmental pollution by pesticides and in turn helpes in sustainable agricultural development.

4. Time Saving: In conventional hybridization programmes, there is linkage drag, where there is inheritance of unwanted genes to the progeny. Several backcrossed generations are required to get rid of such kind of undesired genes. Cisgenesis overcomes the problem of linkage drag and only the gene of interest is introduced into the genome of the recipient plant within a short period of time. Thus, this saves a lot of time.

1. Sequence information of the plant.
2. Isolation and characterization of the gene of interest from crossable relatives.
3. Transformation techniques should be available.
4. Marker free transformation.
5. Intragenic vector development.

Clean vector technology aims to produce plants with only the gene of interest as the newly introduced gene function without any other regulatory gene sequences. Primarily the goal is to avoid the use of antibiotic resistance gene as a selectable marker unlike the present technology.

Steps for the production of marker-free GM plants 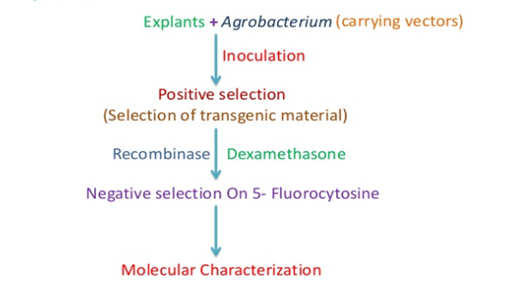