Functional genomics is characterized by high-throughput or large-scale experimental methodologies combined with statistical or computational analysis of the results. Functional genomics as a means of assessing phenotype differs from more classical approaches primarily with respect to the scale and automation of biological investigations. Forward genetics starts with identificat..
Forward and Reverse Genetics Approaches in Functional Genomics
Author: Waghmare Sandesh Tulshiram

Functional genomics refers to the development and application of global (genome-wide or system-wide) experimental approaches to assess gene function by making use of the information and reagents provided by structural genomics. It is characterized by high-throughput or large-scale experimental methodologies combined with statistical or computational analysis of the results. Functional genomics as a means of assessing phenotype differs from more classical approaches primarily with respect to the scale and automation of biological investigations. A classical investigation of gene expression examines how the expression of a single gene varies with the development of an organism In Vivo. Gene function is inferred from the resulting phenotype when the particular gene is mutated. Genomics is changing the way genetics by performing Global, high-throughput approaches. Genomics approaches are being applied to both forward and reverse genetics

In genetic mapping the locus of the gene responsible for the trait of interest is identified. The first step in mapping studies is to find markers which are linked to the trait. Physical linkage will lead to co-inheritance of markers, while recombination events will break these associations. To develop appropriate mapping populations; screen parents for marker polymorphism and genotype the mapping population. Linkage analysis is performed to find out recombination frequencies between markers which in turn lead to the fine mapping of the location of the gene of interest.

Microarray is a very promising technology for identification of genes in transcription deficient mutants. The approach of using phenotypically similar mutants minimizes the number of candidate genes for sequencing, due to the reduction of genes which are secondarily affected by the mutation. Both cDNA and Affymetrix microarray platforms successfully pinpoint the gene which is up-regulated or down regulated due to the induced or natural mutation events.

This approach is appropriate for plants where mutant collections, represented by multiple independent mutant alleles are available. The major difficulty with this approach is that in order to choose a potential candidate gene for the mutation. Then this gene can be a potential candidate for the mutation in the investigated plant and the principle proof that this candidate gene is responsible for the observed phenotype is coming from comparative sequence analysis of all available mutant alleles in the particular locus.

Exome sequencing is a influential method to selectively sequence the coding regions of the genome. This method can be combined with target-enrichment strategies, which give possibility to selectively capture genomic regions of interest from a DNA sample prior to sequencing.

TILLING is based on the use of a mismatch-specific endonuclease ( CelI), which finds mutations in a target gene containing a heteroduplex formation. The technique involves PCR amplification of the target gene using fluorescently labeled primers, formation of DNA heteroduplex between wild type and mutant alleles (PCR products, corresponding to the mutant and wild type alleles are heated and then slowly cooled), followed by endonuclease digestion specifically cleaving at the site of an EMS induced mismatch. One of the greatest benefits of the TILLING approach is that it does not involve genetic manipulations, that results in Genetically Modified Organisms (GMO), which are not legal for agricultural applications in many countries In EcoTILLING genomic DNA sequence is used to identify the mutations created using endonuclease (CEL I). These techniques are independent of genome size, ploidy level and reproductive system of plants. They can be applied not only to model organisms but also to economically important crops. 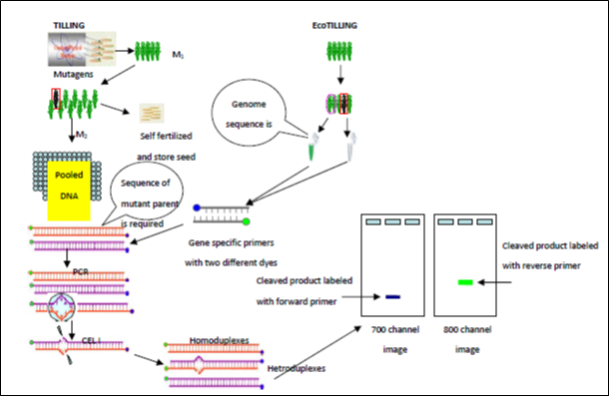