This article discusses types of genetic material, various techniques involved in genetic engineering, Gene cloning methods and its applications...
INTRODUCTION:
In the 19th century, Gregor Johann Mendel conducted his experiments with the pea plant (Pisum sativum). He noticed that certain traits or characters are transferred from the parent to its offspring due to the presence of a certain entity known as a "factor". He also formulated three laws which stated the basis of transfer of these characters from the parent to the off-spring. Mendel's "factor" was later renamed as "gene" by Wilhelm Johannsen in 1909, and the word "genetics" was used by William Bateson in 1905.

TYPES OF GENETIC MATERIAL
Genetic material is comprised of -
Ã¢â‚¬Â¢ A sugar molecule comprising of five carbon atoms,
Ã¢â‚¬Â¢ A nitrogenous base, and
Ã¢â‚¬Â¢ A phosphate group.

Depending upon the type of sugar molecule and the nitrogenous base present, there are two types of genetic material.

GENETIC ENGINEERING -
Modifying the existing genetic material of an organism is termed as "Genetic Engineering". It involves transfer of a gene from one organism to another. The main goal of genetic engineering is that newer traits or characters are added which are not present in the original organism.

Ã¢â‚¬Â¢ Microinjection - This technique does not employ the use of plasmids for gene transfer. The isolated gene of interest is injected into the cell where the gene is required to be expressed. In the case of larger cells, a glass needle may also be used for injecting the gene. The isolated gene of interest, upon injection, enters the nucleus of the cell, and combines with the genetic material of the desired cell where it expresses itself.

Ã¢â‚¬Â¢ Electroporation - Pores are created in the cell membrane using a weak electric current. The isolated gene of interest is then introduced into the cell through these pores where it is taken up by the nucleus.

Ã¢â‚¬Â¢ FlavSavr tomatoes were the world's first genetically modified food. However, increasing costs meant that its production had to be halted.

Ã¢â‚¬Â¢ Production of golden rice being a rich source of beta-carotene, from which Vitamin A is synthesized.

Ã¢â‚¬Â¢ Vaccines being administered through consumption of bananas.

Ã¢â‚¬Â¢ Production of "glow in the dark" cats by altering the DNA present in the fur of a kitten.

The aforementioned techniques of genetic engineering are used so as to isolate and introduce a particular gene of interest in the required cell or organism. But what if more than one copy of such a gene is required? How do you obtain multiple copies of a single isolated gene?

Multiple copies of an isolated gene of interest can be obtained through a process known as "gene cloning".

The term "clone" is used to refer to an "identical" copy of any entity. Although identical twins are "identical", they are not technically clones because "identical" twins are produced when a single zygote splits into two after fertilization. This is a completely natural process, whereas "clones" are artificially produced in the laboratory.

In the laboratory, various techniques are employed so as to obtain "identical" copies of a particular gene of interest. Therefore, this technique is known as "gene cloning". This is one of the most important techniques used in genetic engineering.

Ã¢â‚¬Â¢ Cloning vectors - A cloning vector is a vector that helps in obtaining multiple copies of a single gene. This vector is a DNA molecule obtained from a virus or a plasmid which is stable, and into which the desired gene of interest can be inserted, so as to obtain multiple copies of the same. Examples of cloning vectors include E. coli, plasmids, phages, bacterial artificial chromosomes (BACs), and yeast artificial chromosomes (YACs).

Once a gene is introduced into a cloning vector, multiple copies are obtained. Only those copies which show "transformation" are selected for further study. This selection is performed using a marker site. The most common sign of "transformation" is the development of antibiotic resistance within the vector due to the expression of the isolated gene of interest.

Ã¢â‚¬Â¢ Polymerase Chain Reaction (PCR) - This is a method of amplifying a single DNA sequence, so as to obtain multiple copies. This technique was devised by Kary Mullis in 1983. This method employs usage of repeated heating and cooling, so as to separate the double-stranded DNA, and form a new complementary DNA strand. Thus, the double stranded nature of DNA is maintained. This method employs the use of enzymes for denaturing the DNA strand, and synthesis of a new strand, but does not employ the use of cloning vectors.

The instrument used in PCR is known as a PCR thermal cycler.

1. Denaturation - This is the first step of the PCR cycle which involves increasing the temperature of the thermal cycler to 94oC to 98oC, for a period of 20 to 30 seconds. At this temperature, the double stranded DNA breaks up ('denatures'), and forms two separate single DNA strands, each complementary to the other.

2. Annealing - The term 'anneal' means 'join'. In this step, the temperature in the thermal cycler is decreased, so as to enable 'annealing' or 'joining' of the primer molecule (small stretch of DNA) at the 3' end of the parent single DNA strand - DNA replication takes place from the 5' to the 3' direction of the complementary strand (which is the 3' to the 5' direction of the parental DNA strand). The temperature for annealing depends on the length and composition of the primer molecule. It is raised from 50oC to around 70oC, maintained for about 40 seconds.

PCR is a method employed for gene cloning. But it has various other applications 6 such as -
1. Testing for genetic disorders
2. Detection of infectious diseases
3. DNA fingerprinting - DNA testing in forensic studies
4. Analysis of DNA for evolutionary studies
5. Gene mapping - Localization of genes on a particular chromosome

The most well-known example of a genetically-modified crop is the insecticide-producing Bt cotton. This is a variety of cotton that has been genetically modified using the insecticidal gene of Bacillus thuringiensis.

In the medical field, genetic engineering can also be used to study certain biological phenomena such as delay in healing of wounds with progression of age. 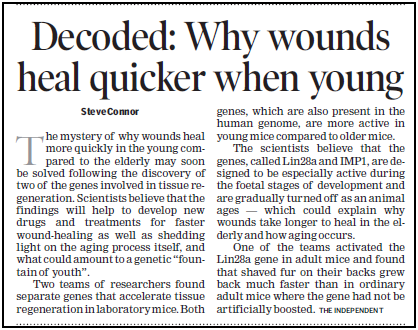 Ã¢â‚¬Â¢ Environment - Use of micro-organisms to remove pollutants from the environment is known as bioremediation.

E. coli has been genetically modified such that it can not only survive in a mercury-rich environment, but also help in the removal of mercury from that environment. The genetically modified E. coli possesses genes which produce metallothionein and polyphosphate kinase. They develop resistance within the bacterium against mercury, and also help the bacterium in accumulating mercury from its surrounding environment, thus isolating it. 7

3. Gene editing - Removal and addition of specific DNA sequences within the genome. It is used in treatment of those diseases which affect the genetic makeup of the organism.

A new revolutionary technique called "Crispr" has been developed so as to alter highly specific portions of the DNA without causing mutations.

4. Gene banking - Preservation of the biological repository of living organisms by freezing until further need.