Brief note on different types of mapping population used in mapping and their methodology of development..
Mapping Population: Types and Method of Production

DH produced from chromosome doubling of pollen/egg derived haploid plants from F1. Another method of producing the haploids is wide crossing. For example haploids in barley, can be produced by wide crossing with Hordeum bulbosum. During the early stages of seed development the H. bulbosum chromosomes are eliminated producing haploid embryo. In DH all markers segregate in 1:1 ratio.

4) Back cross population (BC)

Backcrossing is a method of crossing of a F1 hybrid with one of its parents. The offspring produced has genetic identity similar to that of the parent. In genetic analysis usually recessive parent is used.

RIL population is developed using continuous selfing or sibmating progeny of individual member of F2 population until complete homozygosity is achieved. Single seed descent method is best for development, bulk or pedigree method without selection can be used. Segregation ratio of RILs is 1:1.

NILs are lines of genetic codes that are identical except for differences at a few specific locations or genetic loci. NILs can be developed by repeated selfing or backcrossing of F1 with recurrent parent. Irrespective of dominant or codominant marker NILs segregate in 1:1 ratio. 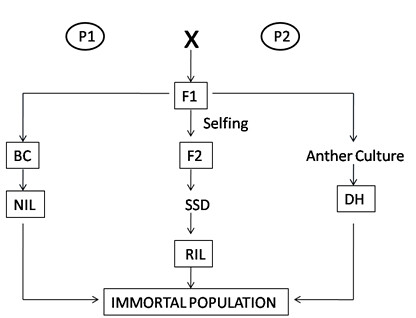 About Author / Additional Info:
Ph.D. scholar, worked on Metagenomics during masters and now working on Wheat for salinity tolerance.