Molecular Farming refers to the new area of science which combines the use of biotechnology and plants in order to produce valuable products. It is also called as Molecular farming, molecular pharming and Bio pharming. These crops will become biological factories used to generate drugs and other valuable recombinant proteins in transgenic organisms on an agricultural scale. Plants can produce various kinds of proteins that can then be made in large quantities. This means that mass production of high value-added useful proteins can be done at very low cost. Molecular farming is the term for new use plants only (not animals) and is different in that this does not affect and has nothing to do with Food.

History: The first recombinant plant-derived pharmaceutical protein (PDP) was human serum albumin, initially produced in 1990 in transgenic tobacco and potato plants.
Market Value: The global market of medical proteins is valued at $36,000 billion. For example the market value for insulin is $1,300 billion and it is expected to increase in case of possible mass production.
Cost is Reduced: Generally production costs can be reduced to just 1/30 the cost of using animal cell culture and 1/3 of the cost of using a microorganism culture system.

There are two types of Molecular Farming: Medical and non-Medical.

1) Medical Molecular Farming: The first synthesis of a pharmaceutically-relevant protein, human growth hormone, was described in transgenic tobacco plants in 1986. Barta et.al. 1986. Now, molecular farming has become commercially interesting as a method for the production of recombinant pharmaceutical proteins, in particular antibodies.

Why Plants:
Plants have the natural ability to make human and animal proteins. This means that mass production is greatly simplified by just increasing the acreage of the plants under cultivation. Existing farming equipment can be used in the processing of the plants and thus reduce the costs involved in making the product. Often costs can be reduced as much as 1/30 of that necessary when using animal cell culture and at least by 1/3 when compared to microbial culture systems. Products produced in plants can be stored for long periods without refrigeration if they are expressed in seeds or leaves which can be stored dried.

How Is It Done:
Through careful and skilled manipulation of genes, molecular farming techniques allows for the controlled expression of a specific gene which, when expressed in a transgenic plant, results in the production of a specific target protein. The technologies are so precise that the target protein/enzyme can be expressed in a single plant tissue or during a specific developmental phase of the plants growth cycle. 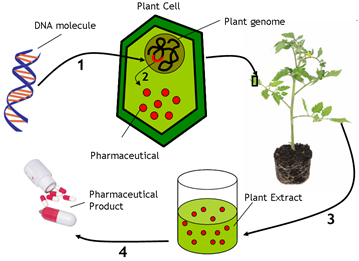 There are currently four methods of protein production from plants:

A. Stable nuclear transformation of a crop species that will be grown in the field or a
greenhouse.

B. Stable plastid transformation of a crop species.

D. Stable transformation of a plant species that is grown hydroponically such that the transprotein is secreted into the medium and recovered

Advantage:
This technology minimizes the cost of production since very large quantities of proteins can be isolated at one time and the high costs of animal cell culture are eliminated.

Disadvantages:
Only specific very-high value medical proteins are being considered for plant molecular farming. Biopharmaceuticals that are potentially harmful are capable of persisting in the environment and might accumulate in non-target organisms.


About Author / Additional Info:
I am currently pursuing Ph.D. from CCS HAU, Hisar