Well technically Riboswitches are conserved RNA sequences encoded within the mRNA and are cis-acting regulatory sequences that bind to small entities like metabolites and metal ions as ligands and regulate mRNA transcription or initiation of translation by forming alternative structures in response to the ligand binding. The groups of ligands those can be sensed by Riboswitches include: 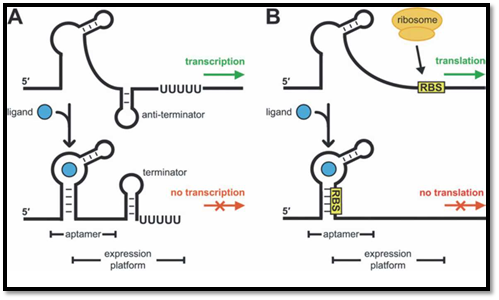 Figure.1) Shows the two major mechanisms of Riboswitch mediated gene regulation in prokaryotes; where A is showing pre-termination of transcription and B is showing blockage of translation initiation by riboswitches.

The Riboswitches are amazing pieces of natural artwork those can regulate a gene at the RNA level by being in the mRNA themselves without the involvement of any other major protein complexes like activators and repressors those are the regular machineries for such regulatory activities. Nearly all examples of the known riboswitches reside in the non-coding regions of the mRNAs. A riboswitch is most commonly located in the 5â€™ UTR region of a bacterial mRNA. However there are certain exceptions where the riboswitch regulates from a 3â€™ UTR. Coming to the structure of the Riboswitches, they are basically composed of two domains:

There are two ways in which the regulation can happen:

2. Blocking translation initiation - This is similar to the above mechanism but the only difference is; this time the binding of the ligand which leads to a hairpin formation takes up the RBS (Ribosome Binding Site) along with it to form the hairpin which makes it unavailable for binding to the Ribosome for the initiation of translation. Thus the translation is blocked. No translation occurs.


Note : There is also a third mechanism of regulation which is not mentioned everywhere in the literatures in which binding of the ligand to the Aptamer leads to formation of the hairpin followed by cleavage at the point of hairpin loop formation and thus rendering the mRNA unavailable for translation.

Riboswitches can also alternate structures that affect the splicing of the pre-mRNA. Sighting one example, a TPP riboswitch (a class of riboswitch) in Neurospora crassa (a fungus) controls alternative splicing to conditionally produce an Upstream Open Reading Frame (uORF), thereby affecting the expression of downstream genes. All these kinds of regulations mentioned above very heavily depend upon the concentration of the ligands present in the surrounding.

3. Ligand: enzyme co-factors
a) Cobalamin riboswitch (also B12-element), which binds either adenosylcobalamin (the coenzyme form of vitamin B12) or aquocobalamin to regulate cobalamin biosynthesis and transport of cobalamin and similar metabolites, and other genes.

a) Lysine riboswitch (also L-box) binds lysine to regulate lysine biosynthesis, catabolism and transport.
b) Glutamine riboswitches bind glutamine to regulate genes involved in glutamine and nitrogen metabolism, as well as short peptides of unknown function.
c) Glycine riboswitch binds glycine to regulate glycine metabolism genes, including the use of glycine as an energy source.
d) glmS riboswitch, which is a ribozyme that cleaves itself when there is a sufficient concentration of glucosamine-6-phosphate.


Applications of riboswitches in research and development

2. Designing of Ligand-inducible expression systems for common laboratory organisms such as E. coli and B. subtilis which will be more cost effective and simpler than IPTG induced expression system.

4. Development of more complicated RNA transcription regulation system with more than one riboswitches to develop more control over multiple expression systems; by using more than one ligands (synthetic logic gates) singly or at a time to reprogram cell behavior and to engineer metabolic pathways.