Neural Tube Defects (NTDs): This is one of the most common severely disabling birth defects affecting approximately 1 in every 2,000 births.

• This is due to the failure of closure of neural tube which is observed during 4th week of embryogenesis.

• Anencephaly and spina bifida are the two most common neural tube defects.
→ Anencephaly- rostral part of the neural tube fails to develop into brain. They have brain stem which controls the reflexes like breathing.
→ Spina bifida: also known as "Split Spine". A bulge is seen in the lumbar-sacral region of the spinal cord.

Types of Spina Bifida: There are 3 types of spina bifida depending upon their severity-

(i) Myelomeningocele- this is considered to be the most severe form of the disease. The neural tube fails to fuse and protrude has been seen in the spinal cord. Severe nerve damage and major disabilities is experienced in this case.

(ii) Meningocele- A bulge in the lumbar-sacral region is seen in the spinal cord with minor disabilities and no nerve damage.

(iii) Spina Bifida Occulta- This is the least severe form of the disease. This is also known as hidden spina bifida as it is not even noticed through naked eyes. This is harmless without any nerve damage.

The causative factors of the disease are:

(i) Administration of the antiepileptic drug (valproic acid) during the first trimester of pregnancy could result in spina bifida.

(ii) Folic acid deficiencies during or before the pregnancy.

(iii) Folate Metabolism Pathway is suspected to be a major contributor.

a) Paralysis, difficulty in movement.

b) Incontinence of urine and feces.

c) Abnormalities seen in the hips, knees, and feet.

d) Hydrocephalus- enhanced pressure of cerebrospinal fluid resulting in the swelling of brain.

Spina Bifida is naturally found in dogs and cats. Research involving lambs showed it to be an autosomal recessive trait. Rats and mouse are generally used for studying the disease.

Mouse is considered to be the perfect model for studying the underlying causes of NTDs. Mice models not only allow for identification of the genes required for neurulation, but they also provide tractable systems for uncovering the developmental, pathological and molecular mechanisms underlying NTDs. In addition to this, mouse models are essential for understanding the mechanisms of geneâ€"environment and geneâ€"gene interactions that contribute to the multifactorial inheritance of NTDs. These models also aid in the development of therapeutic approaches for the disease.

In this model, pregnant Sprague-Dawley rats weighing 180g were injected subcutaneously with 1% trypan blue on 7-8 day of gestational period to produce embryos with spina bifida or anencephaly. The control rats were given vehicle only. The scanning microscopic examination of 9-10 day old embryos revealed no morphologic differences between controls and subjects. Subsequent gestational days showed closure of neural tubes in controls but progressive opening of neural tubes in both the rostral and caudal regions were found in the diseased models. Growth of the dysmorphic neural tube region with subsequent spontaneous necrosis late in gestation resulted in the mature malformations of anencephaly and spina bifida. This study emphasizes the similarities in the developmental stages of spina bifida and anencephaly (Smith M.T, 1989). 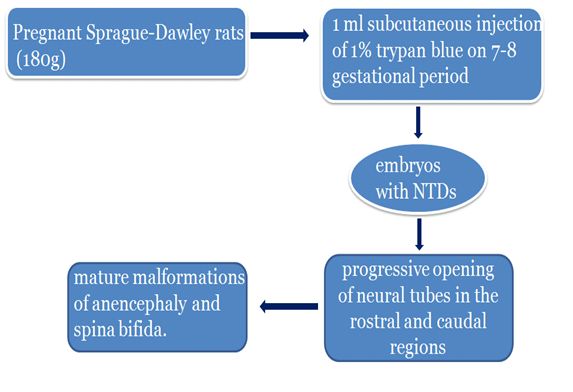 In humans, the neural tube defects involve multiple interacting genes and environmental factors and are considered to be multifactorial. Hence, analysiyng a single mouse mutant is not enough and canâ€™t be extrapolated in humans (Henny W.M et al., 2001).

• Surgery shortly after birth
• Folate supplementation helps prevent the defect through amino acid synthesis and reducing homocysteine levels
• About 90% of babies born with Spina Bifida live a longer life , about 80 percent have normal intelligence and about 75 percent play sports.

About Author / Additional Info:
I am currently doing my M.Phil in Neurosciences from NIMHANS (Bangalore)