BCR-ABL1 Oncogene and its Leukemic Properties

Whether our blood cells are protector or destroyer? If they are protector, by constant maintenance and immune protectant of all cell type in body, what makes one third of people in world's population to die with myeloid leukemia. This article provides a glimpse about role of BCR-ABL1 oncogene in myeloid of leukemia.

In leukemia, the hematopoietic stem cell undergoes either immature or partial maturation. These cells can reproduce quickly and invade through blood stream which spread to other organ resulting in interruption of their normal function. BCR-ABL1 oncogene is responsible for most cases of chronic myelogenous leukemia and acute lymphoblastic leukemia. BCR-ABL oncogene is the result of t(9;22)(q34;q11) reciprocal translocation generating Philadelphia chromosome.

BCR-ABL1 tyrosine Kinase: The combination of breakpoints within BCR and ABL1 genes generate different fusion transcript encoding protein. SRC and ABL1 kinases share a common central core of overall 42% homology composed of a tyrosine kinase domain, a SRC-homology-2 (SH2) domain, and an SH3 domain. There is significant difference between SRC and ABL1 kinases in upstream and downstream of SH3 and kinase domain. The NH2 terminus in ABL1 and BCR-ABL1 kinases is the "Cap" region. Two isoforms of ABL1 (1a and 1b) are generated by alternative splicing of the first ABL1 exon. ABL1b contains a myristate site (Myr-NH) at the extreme end of the amino-terminal segment, binds to the kinase domain and keeps the SH2-SH3 autoinhibitory structure. The homology region in SRC family kinase is the N-terminal membrane-localization domain which is also referred to as the SH4 domain. 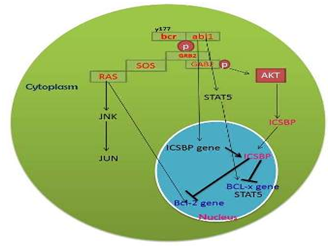 In short, the ABR gene is associated with tyrosine kinases production, which controls major functions of the cell. Soon after the augmentation with BCR gene, it transcribe a mutated protein kinase. One of major functions of tyrosine kinases is cell cycle control and they are controlled by several co-factors. Mutated tyrosine kinases is continuously in "ON position". They don't require any co-factor activation, resulting in uncontrolled cell division, inhibited DNA repair mechanism and that leads to genomic instability causing leukemia. There are many things which are largely being unanswered. For example, what makes or controls the expression of BCR-ABL1 during prognosis of the disease. Is that disease condition is solely because BCR-ABL1, do any other factors augment the effect of genomic instability, self-renewal, impaired DNA repair mechanism etc. Do they exhibit any positive feedback mechanism for their expression? Likewise many questions comes into the minds of cancer biologists. For the better treatment strategies, we do need more explorations at molecular level of the disease.