Filariasis is a vector borne disease and is spread from one person to another by blood sucking vectors like mosquitoes. Adult filarial worms produce millions of microfilariae in the body of the host which enter the circulation and reside in blood. When a mosquito bites such a patient it takes up these microfilariae which then develop in its body to infectious filarae. These infectious filarae are then transferred to the next person the mosquito bites and withdraws blood from. Once these filarae enter the human body they mature and multiply and get lodged in the lymphatic system to cause lymphatic filariasis. 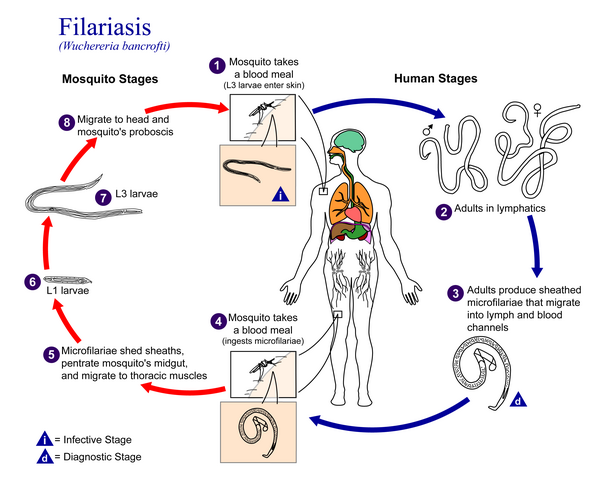 Treatment of Filariasis
Filariasis can be treated by anthelmintic drugs like albendazole and ivermectin, in combination or as singular therapy. Diethyl carbamazine or DEC is also a successful therapeutic agent for filariasis in combination with albendazole. All the mentioned drugs target the microfilariae and do not have any effecton the adult worms. In filarial prone areas of India, tablets of DEC are distributed under the Mass Drug Administration once a year and are given to everyone above two years of age. The rationale behind this practice is that even healthy asymptomatic people may be harbouring microfilariae in their blood which could be transferred by mosquito bites. Hence this Mass Drug Administration is largely a technique to prevent the transmission of filarial and thus to contain this epidemic.

The most definitive diagnosis of filaria is direct visualisation of the worms in the blood by microscopy using the geimsa stain. For this the blood must be collected between 10:00 pm to 2:00 am because the microfilariae circulate in the blood at night called the 'nocturnal periodicity'. Serologic techniques provide an alternative to microscopic detection of microfilariae for the diagnosis of lymphatic filariasis. Patients with active filarial infection typically have elevated levels of antifilarial IgG4 in the blood and these can be detected using routine assays. Other diagnostic tests based on ELISA and PCR are also available for detection of filarial infection. But these tests are expensive and need proper facility for detection and consolidation of results. Moreover they are also laborious and time consuming. Also many of them are time specific due to nocturnal periodicity and hence are not suitable for field conditions. In endemic regions where the number of infected persons is very high, it is not possible to send out all the collected samples to sophisticated laboratories for detection and diagnosis.

These shortcomings of detection kits and diagnosis techniques were understood by a group of researchers headed by Prof. P Kaliraj, Centre of Biotechnology, Anna University who developed a rapid, antibody-based diagnostic kit called 'Signal-MF'. This kit developed in in collaboration with Gujarat-based Span Diagnostics can test the blood samples at any time of the day and can give results in only three minutes. The lead researcher, Prof. P Kaliraj has said, "The imported kits available in the market today are ELISA based and detect the antigenic protein. This detection methodology is not only expensive in terms of infrastructure required, but it also requires expertise and considerable time (about 4-5 hours). Hence this is not suitable for mass surveillance in countries like India. Moreover, these kits are not able to detect the infection caused by Brugia malayi, another filarial parasite which is incidentally endemic in parts of India."

Signal-MF is world's first rapid antibody detection kit which can simultaneously detect Wuchereria bancrofti and Brugia malayi. The kit detects the presence of the anti-filarial antibody which is considered to be the most sensitive and accurate way of diagnosis of filariasis. The benefit of this detection is that diagnosis can be made even in early stages of disease when the microfilariae have not matured into adult filariae. This development takes around three to five years and during this period the person is largely asymptomatic. Thus with the help of this kit early detection of filariasis is possible.

Cost of Kit
This technology has been transferred from Anna University, Chennai to Span Diagnostics, Surat for commercialisation and development. The price of this kit is around 40 Indian Rupees and it beats all its competitors in this field. The technique also has high specificity and sensitivity which have not been compromised for the low price of the product. US-based Centre for Disease Control (CDC) has carried out multicentric efficacy tests and trials on this kit across five countries in different climatic conditions and has reported that this diagnostic kit has 90 percent sensitivity and 100 percent specificity. The kit has also passed stability studies as per the European Pharmacopoeia and is ready to be commercialised all over the world. The product is useful for not only India but other countries where filariasis is endemic like South East Asian countries and Africa.

Signal-MF will play a phenomenal role in the path to eradication of filariasis from the face of Earth. The development of such a diagnostic kit in an Indian laboratory only fortifies the world's interest in Indian research. All eyes are now on Signal-MF and how it will alter the disease scenario in present times.