In the industrialized world, functional foods have become a part of an everyday diet and are demonstrated to offer potential health benefits beyond the widely accepted nutritional effects. Currently, the most important and frequently used functional food compounds are probiotics and prebiotics, or they are collectively known as ‘synbiotics’. The term probiotic is derived from two Greek words which literally means “for life”. The first scientist to discover health benefits of probiotics was the immunologist Dr. Eli Metchnikoff who was awarded the Nobel Prize in 1908.

Food and Agriculture Organization (FAO) of the United Nations and the World Health Organization (WHO) defines probiotics as “live micro organisms that when administered in adequate amounts confer a health benefit on the host” .

It includes a large range of microorganisms, mainly bacteria but also yeasts. LAB are the most important probiotic known to have beneficial effects on the human gastro-intestinal (GI) tract. These bacteria are Gram-positive and usually live in a non-aerobic environment but they also can survive aerobic conditions.

Most probiotic bacteria produce lactic acid. The lactic acid keeps the gut at a low pH, maintains the gut microflora. Probiotics also combat the growth of harmful pathogens that cause foodborne illnesses (i.e. diarrhea) such as Salmonella and Escherichia coli. The probiotics prevent the attachment of these pathogens by competing for similar binding sites on the gut epithelium.

Properties For Effective and Successful Probiotics: 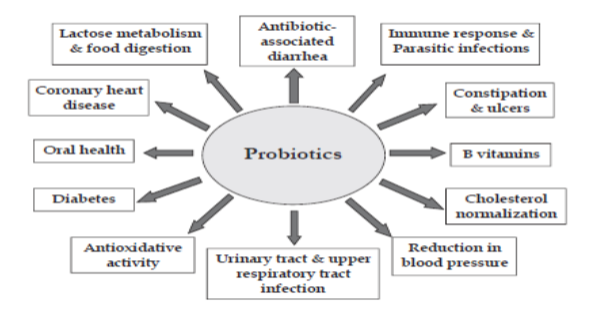 Fig. No.1: Health Benefits of Probiotics

Lactose is a sugar found in milk, composed of a glucose molecule linked to a galactose molecule. Lactose can be split into glucose and galactose by lactase, an enzyme produced by infants, children, and some adults. Most hu­mans, however, quit producing this en­zyme in childhood. If these people con­sume dairy products with lactose, they can develop gastrointestinal symptoms such as abdominal bloating, pain, flatu­lence, and diarrhea. These people tend to eliminate milk and dairy prod­ucts from their diet, and consequently, their calcium intake may be compro­mised. The bacteria used as starter cultures in yogurt (Streptococcus ther­mophilus and Lactobacillus delbrueckii subsp. bulgaricus) also produce lactase, and when consumed with dairy prod­ucts can improve lactose digestion.

Daily consumption of one to three servings of fermented milk contain­ing a probiotic strain, Bifidobacterium animalis, decreased the amount of time it took food to travel from the mouth to the anus for people who had longer-than-desired transit time.

Certain gut bacteria process left­over food that reaches the colon with­out producing gas. Other species even may consume gas, particularly hydro­gen. But others produce gas, which is eliminated from the body through flatu­lence. Some probiotics seem useful for controlling the symptoms related to intestinal gas.

Both the short- and long-term use of antibiotics can produce diarrhea, particularly when multiple drugs are used. Probiotics given along with antibiotic therapy have been shown to decrease the incidence of antibiotic-associated diarrhea in chil­dren and in adults.

This is one of the newer areas of probiotic research. Described as the “gut-brain axis,” that is the communication between the gut and the brain affects not just physical but also mental health and behaviour. Probiotics can reduce anxiety, relieve stress and improve mental outlook. probiotics L. helveticus and Bifidobacterium longum reduced depression, anger, hostility and self-blame and improved problem-solving ability.

Probiotics are defined as ‘live microorganisms which when administered in adequate amount confer health benefits to the host’ (FAO/WHO, 2002). Alternatively, probiotics have been defined as live microbial feed supplements that beneficially affect the host animal by improving its intestinal microbial balance. At present, several well-characterized strains of

Bifidobacteria are available for human use to reduce the risk of gastrointestinal (GI) infections or treat such infections. Some of the beneficial effects of probiotic consumption include improvement of intestinal health by the regulation of microbiota, and stimulation and development of the immune system, synthesizing and enhancing the bioavailability of nutrients, reducing symptoms of lactose intolerance, and reducing the risk of certain other diseases.